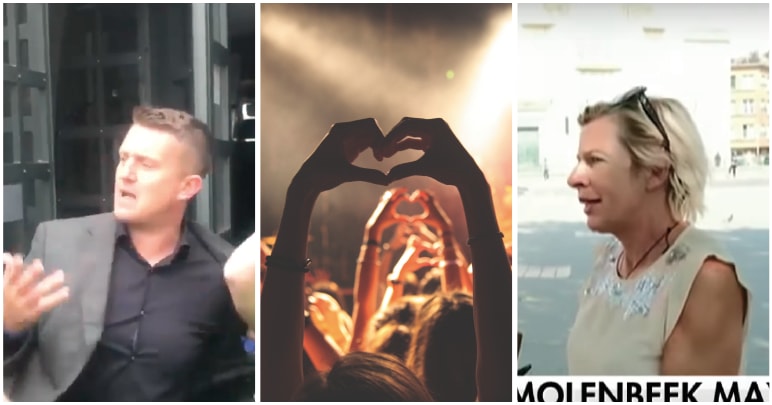 It’s been quite the week. The weather’s been good, it’s a bank holiday, and the far-right has taken a battering. In other words, it’s been the best of Britain.

Tommy Robinson, who’s real name is Stephen Yaxley-Lennon [paywall], was arrested on 25 May. When it happened, he was live-streaming outside Leeds Crown Court where a child grooming trial was taking place. Upon his arrest, Yaxley-Lennon said:

There are laws on reporting to protect accusers and defendants. Breaches of these laws can lead to criminals walking free. And Yaxley-Lennon was already subject to a suspended sentence for committing contempt of court at a ‘gang rape’ case in Canterbury.

He was told by the judge at sentencing:

In short, Mr. Yaxley-Lennon, turn up at another court, refer to people as ‘Muslim paedophiles, Muslim rapists’ and so on and so forth while trials are ongoing and before there has been a finding by a jury that that is what they are, and you will find yourself inside. Do you understand? Thank you very much.

Thank you very much indeed.

Katie Hopkins was earlier this week subjected to a surprisingly brutal newspaper apology:

One of the best newspaper corrections in history pic.twitter.com/kPjjRtYJ8o

But this isn’t the only problem she has right now. Because a Belgian mayor is seeking to file a civil suit against her. Primarily as Hopkins referred to an area in Molenbeek as “the European capital of jihadism”.

Although there’s nothing to suggest Hopkins was mixing ketamine with journalism again, she certainly appeared confused:

Katy Hopkins is walking around Belgium currently complaining about people she perceives not to be Belgian being in Belgium. Katy isn't Belgian. Katy is also publishing images taken of people without their consent which I believe is against the law in Belgium. pic.twitter.com/tmEexEtHOO

This potential civil suit is bad timing for Hopkins. Earlier this year she sold her £1m house after losing another libel case – one which cost her a stinging £131,000 in damages and court costs. It also comes after the Mail Online scrapped her lucrative column by “mutual consent”.

The problem she has is that the thing which made her rich – saying controversial and often untrue things – is precisely what’s ruining her.

Worst of the rest

Raheem Kassam also left his job as Breitbart‘s London bureau editor this week. He says it’s to pursue other opportunities. But others have pointed out Kassam was the last staunch ally of Steve Bannon, who left the outlet under a dark cloud. The organisation is clearly eager to make some changes though, as its readership almost halved recently.

Kassam himself has hinted at running to become the mayor of London. Kassam previously backed out of an attempt to become the leader of UKIP though because he didn’t think he would win – a position that pretty much anyone seems able to get.

The final dishonorable mention goes to Peter Sweden. Sweden is another alleged ‘journalist’. He was recently worried that people were messing with his balls and spends a lot of time complaining about religious extremism and foreigners. He took a break from that this week, though, to call Irish people evil:

His tweet ultimately proved futile, thankfully. So well done Ireland, and happy bank holiday to everyone in the UK!

Except for Yaxley-Lennon obviously.