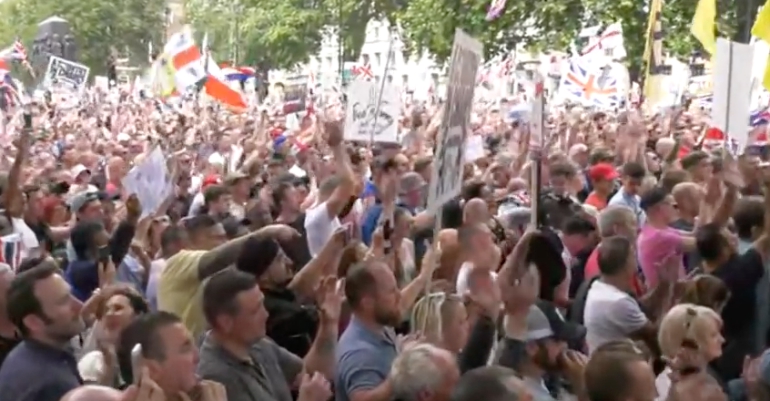 On Saturday 9 June, supporters of Stephen Yaxley-Lennon gathered in Central London. Yaxley-Lennon uses the name Tommy Robinson, and is the jailed former head of the English Defence League (EDL). Eyewitnesses estimate that up to 10,000 people joined the rally.

Media reports inevitably focused on the pockets of the protest that turned violent; clashes with the police always make for good headlines. But looking through the online video footage, it appears much of the protest was peaceful. At one point, supporters held a sit-down protest outside Downing Street.

In fact, from the videos, some of the scuffles appear to have occurred after the police had a little panic that protesters were going to try and head towards Buckingham Palace and disrupt the type of Union-Jack-waving the state supports.

Regardless, it’s not an issue of whether the protesters were violent. Dismissing people as thugs just because they fight back against often provocative policing is lazy journalism. What should worry us is the level of support this campaign is attracting. And it’s these numbers we cannot ignore.

Undoubtedly, the ‘Free Tommy’ campaign has given the far right a new impetus. We’ll probably never know if this is what Yaxley-Lennon intended when he breached his suspended sentence for contempt of court by doing exactly the same thing again. But in doing so, he has made himself a martyr and a rallying point. And he’ll probably be sitting in jail celebrating the fact that his imprisonment has caused such a reaction.

I wasn’t at the protest in London, but have witnessed a lot of EDL protests over the last eight years. Many have been large. Many have included pockets of extreme violence that went way beyond fighting back against the police.

Take Dudley in 2010, for example. On a protest of several thousand, around 200 EDL supporters broke away from the march. They rampaged down residential streets, breaking windows and smashing cars. One brick narrowly missed hitting a woman with a baby as it came through her front room window.

Later in the day, protesters fought running battles against riot police with iron poles. Meanwhile, small pockets of EDL supporters were seen around town, terrorising communities and ‘sieg heiling‘ through the streets.

These weren’t isolated events. They were repeated across towns and cities such as Luton, Leicester, Birmingham and Bradford.

In other words, the scenes in London weren’t something new. They’re a continuation of an undercurrent that’s been rumbling for years – but one that’s now grown from a street movement to having its own media and support from the international far right.

Demonising those protesting, dismissing them as ‘violent thugs’, or screaming ‘racist’ repeatedly in their faces, while sometimes perfectly valid, is not always the answer. While the EDL and far-right groups provide a convenient scapegoat for some vile ideas, these ideas don’t come from thin air. Importantly, they don’t just come from fringe publications and social media.

These ideas are repeatedly and insistently propagated by the tabloid media. Screaming headlines put the blame for all society’s ills at the door of immigrants, Muslims, and the disabled. Apparently, our NHS is on its knees because of immigrants; our kids don’t have a decent education because our schools are overrun by children who only speak English as a second language.

In 2017, assistant general secretary of the Muslim Council of Britain Miqdaad Versi collated 20 stories that were inaccurate about Muslims. He stated:

This has real-life consequences as far-right extremists share such false stories, leading to rising hostility towards Muslims.

Meanwhile, this language is aided and abetted by politicians. Speaking about the rise in hate crime following the Brexit vote, Christian Ahlund from the European Commission against Racism and Intolerance stated:

And in May 2018, E Tendayi Achiume (the UN special rapporteur on racism) said:

A Brexit-related trend that threatens racial equality in the UK has been the growth in the acceptability of explicit racial, ethnic and religious intolerance.

Stakeholders raised serious concerns about the failure of political leaders on the left and the right to consistently and unequivocally condemn antisemitism and Islamophobia perpetrated in the media, in public spaces and even by members of the UK parliament.

Meanwhile, we are living in a country with gross inequality. According to The Equality Trust, the UK “has a very high level of income inequality compared to other developed countries”. The top fifth of the population owns 40% of the income generated in the UK.

Much of the press is owned by billionaires. Many politicians come from or are connected to wealthy elites. It’s in the interests of these very wealthy and powerful people to provide a scapegoat; to ensure we don’t come together in our rage at what’s happening in our communities.

And so immigrants, Muslims, and anyone or anything different become a convenient filter to drown out the political and societal causes of discontent and anger.

Large-scale street resistance to the far right is needed and important. All of us must stand up to racism and speak out wherever and whenever we can.

But we also have to engage with people. Many are feeling discontent and anger, and if the left is to survive, we must be proactive about cross-community conversations and initiatives.

We shouldn’t underestimate what just happened on the streets of London. Yaxley-Lennon’s imprisonment has undoubtedly become a rallying cry that is mobilising people. These numbers cannot be ignored and must serve as a wake-up call to all of us.