I knew what impact Jeremy Hunt's ridiculous reform would have on nurses. Because I was one. - The Canary 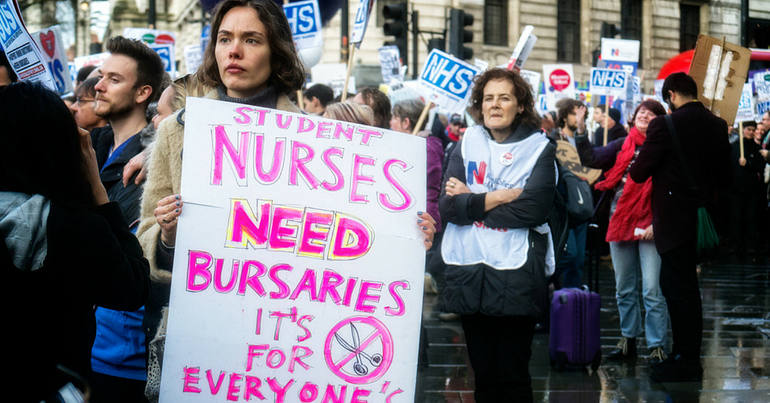 I started my nurse training in 1991. I had a bursary and lived in subsidised hospital accommodation. There were no tuition fees, and I finished my training with no debt.

But it was hard work. We had to be in college all day, every day. We didn’t get long holidays. On placement, we had to work full shifts – days, nights, weekends. Friends doing conventional degree courses looked on in amazement.

It seems reasonable that people going into a vitally important but poorly paid profession should be paid to do the training. But in autumn 2015, then-chancellor George Osborne announced that student nurse bursaries were to be scrapped and replaced with loans. Osborne said:

Today there is a cap on student nurses; over half of all applicants are turned away, and it leaves hospitals relying on agencies and overseas staff. So we’ll replace direct funding with loans for new students – so we can abolish this self-defeating cap and create up to 10,000 new training places in this Parliament.

What neither politician appeared to grasp is that creating new nursing places is pointless if people won’t apply for them. Would-be nurses now face the prospect of graduating with a debt of around £50,000 and then starting with pay of £22,128 a year for an incredibly stressful job. It shouldn’t be a great surprise if many people vote with their feet and choose a different course. And this is exactly what’s happening.

Since bursaries were axed in 2017, applications to nursing courses in England have dropped by a third. In Scotland, however, where the government pays tuition fees for student nurses as well as giving them a non-means tested bursary, applications have remained stable [pdf p7].

The Royal College of Nursing warned the government that this move would cause a fall in applications, but it was ignored. Now the NHS is reaping the harvest: a huge drop in student numbers at a time when there were an estimated 40,000 nursing vacancies in England in 2017. This comes as we’ve also experienced a dramatic drop in EU nurses applying to work in Britain since the Brexit vote. It’s a crisis entirely of the government’s own making.

Several nurses have explained why they think the bursary is vital:

As so many of my colleagues and including myself know, we absolutely couldn’t have considered our training without the support of the bursary. This was predicted by so many but the clinicians weren’t listened to. https://t.co/SaigmdKMYm

Without a bursary I wouldn’t have been able to do my training at all. I’d already had a student loan at 18, and as a single 25 year old did not qualify for any financial support. The bursary was the only way I could pursue nurse training. I can’t be alone. https://t.co/O3zZJ0U9lz

I'm a 32 year old student nurse who doesn't have the bursary. I'm struggling and going to leave with 60k of debt. I worked a 12.5 hour shift today on water, two slices of toast and jam given by my ward and an 50p aldi cous cous

Nursing can be an incredibly rewarding career. But it’s bloody hard work, and the pay is abysmal for what you do. It’s no surprise that applications to nursing courses have plummeted now that students are looking at coming out with a mountain of debt which they will have to repay over many years (at potentially staggering interest rates, depending on income).

Matt Hancock has been appointed as the new health secretary. It would be nice to think he might see sense and restore student bursaries in order to slow down the impending NHS nursing crisis. But I’m not holding my breath.