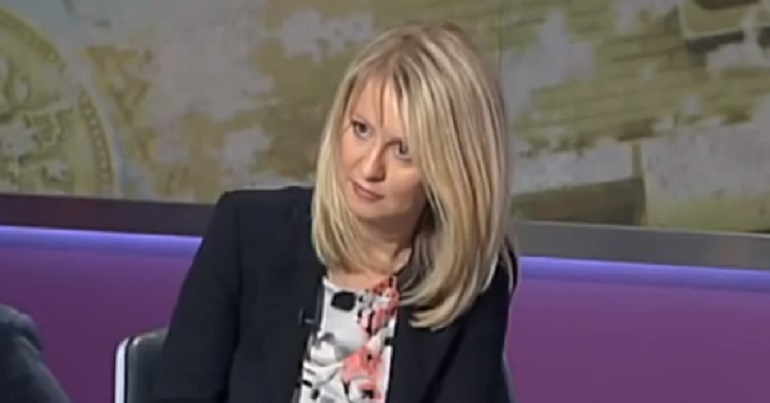 The Department for Work and Pensions (DWP) boss Esther McVey is a vomit-inducing character; not least for her blanket denials of the abuse her department metes out on sick and disabled people. But a speech she just gave – which included bizarre attempts at empathy – has to be the most nauseating of her career.

McVey was giving a speech to the Tory-linked Reform think tank. Called “Universal Credit: delivering the welfare”, it appeared from the pre-event information to be a speech about the new welfare payment. But McVey used it as an opportunity to simply promote herself as a compassionate, god-like reformer of welfare.

She really has got a fucking nerve.

Irony: completely lost on her

Early on in the sermon, Saint McVey proved her delusional behaviour knows no bounds. She pointed to the fact that the 2015 general election left her unemployed. “Don’t think that irony wasn’t lost on me,” she squealed. The fact her brief stint in unemployment ended with a £530-a-day job at the British Transport Police is the only irony about her time out of work. NB: it would take a Jobseeker’s Allowance (JSA) claimant several weeks to get the kind of money McVey was earning in a single day.

From a pulpit (probably soaked in the blood of disabled people), she continued her diatribe on why she understands life on benefits:

Growing up in Liverpool in the 1980s – seeing its impact on people and its impact on local communities. Waking up with nowhere to go, time spent wondering what you’re going to do. Some memories actually never leave you.

And it is those images, those deep-seated memories that spur me on.

If, by ‘spurring on’, she means betraying her own alleged class values, then she’s doing a fab job. Also, if ‘spurring on’ means seeking vengeance for Thatcher’s Britain by inflicting Iain Duncan Smith’s policies on us, then she’s really succeeding.

Saint McVey continued to read from the Bible (abridged) for Government Lackies. She praised the ‘gig economy’ (Deliveroo drivers, cleaners, and the family of Jerome Rodgers may have something to say about that). She also claimed “cliff edges” (where people were worse off on Universal Credit if they worked more hours) were gone – they actually still exist.

She even managed to pluck some quotes from REAL LIFE CLAIMANTS out of thin air; ones which endorsed the system. “Don’t take my word for it”, she cooed. Fear not, Saint McVey – we fucking don’t.

We are both a pragmatic and a visionary government… most importantly, always listening to the claimant.

I can assure you that I’ve never spoken to one claimant who says the DWP is “always listening” to them – and that includes conversations I often have with myself.

So, dear flock: what can we learn from Saint McVey’s preaching?

I previously argued for The Canary that our government, and successive ones before it, were essentially psychopaths – pathologically out of control. This was based on author and anthropologist Will Black’s study on “psychopathic cultures”, where, as I noted:

McVey is the epitome of a government minister entrenched in a psychopathic culture. She is manipulative, deceitful, callous, hostile and irresponsible. John McDonnell was right. This patron saint of human rights abusing misery is a “stain on humanity”. But judging by her nauseating speech, she doesn’t even know it.