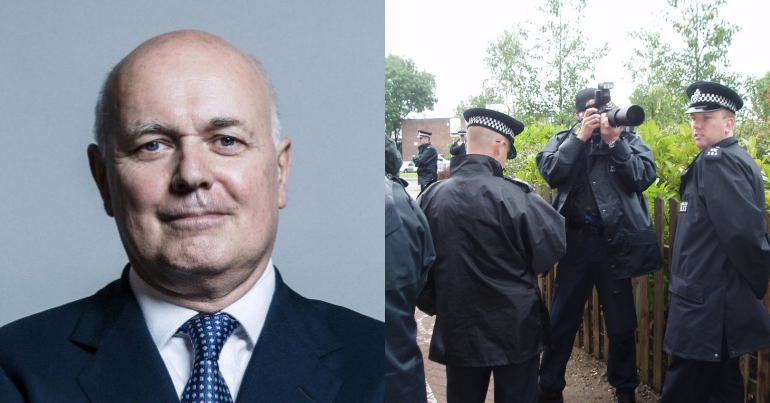 Former Conservative Party leader Iain Duncan Smith believes he’s got a cunning plan to deal with gang violence. But it’s one that’s riddled with problems. Unbelievable as it might sound, it might just be because as a middle-class white man he’s never actually been on the sharp end of any type of policing.

According to a report from Duncan Smith’s thinktank, Centre for Social Justice, gang crime can be eliminated by more active policing and adopting the Group Violence Intervention model used in some US states. Or as Duncan Smith put it: “harass the hell” out of people.

It creates an environment where those responsible for antisocial behaviour have no room for manoeuvre and nowhere to hide, where the tables are turned on offenders so that those who harass our communities are themselves harried and harassed.

Unlike Duncan Smith, I have experienced harassment style policing. And I know the damage that it causes. As a political activist, I was harassed by Forward Intelligence Teams (FIT) – police officers employed to harass, deter and disrupt political dissent.

This involved a range of tactics. From repeated and intrusive photography to excessive stop and searches and arbitrary arrests; from being targeted and followed at close range on protests and for hours afterwards, to fabricated charges, excessive violence and harsh bail conditions. It felt endless and it was exhausting. I took solace in alcohol until eventually I ended up in hospital, vomiting blood and hallucinating cops in the place of paramedics.

Politicians like to talk about the “parity of esteem” between mental and physical health. Correctly so. We should value and treat mental health equally to physical health.

But somehow that concept goes out of the window when it comes to issues such as policing. In response to FIT harassment, I helped found Fitwatch in 2007 to turn the tables on police harassment. At the time I wrote:

If we were being systematically tortured by the state, we would protest. Mental abuse is just as important and it is vital to the strength of our actions that we challenge this.

If Duncan Smith had called for police to beat the shit out of gang leaders, people would rightly be outraged. But adopting a tactic that, to be effective, has to have a fundamental impact on a person’s mental health, is somehow acceptable. As I wrote in Open Democracy in 2014:

The impact of policing tactics on mental health is still largely ignored. The police are only supposed to use force that is reasonable and proportionate to the situation, what they call “reasonable force”. Though this concept is in itself flawed, we also only ever look at whether the force can be justified in terms of physical injury, not mental injury.

I was lucky. I wasn’t harassed because of the colour of my skin. Or because of where I lived. It was because I chose to engage in political activism. But the people who’ll be the target of Duncan Smith’s plans don’t have this luxury. They’ll be targeted because they’re poor Black kids.

The stop and search figures from 2017 may have been at their lowest level since records began 16 years ago. But one fact remains: Black people are still eight times more likely to be stopped and searched as white people.

But this is a further fundamental problem with Duncan Smith’s model. Too often policing decisions are made on intelligence that is based on assumptions. In 2018, a report from Amnesty International showed that people – almost all young Black men – were included on a gangs database based on “little or no evidence”.

It’s time to rethink policing. It’s time to stop and think about whether criminalising more and more people is the answer. And we really need to recognise the mental health impact of policing tactics, and put them on a par with physical violence.

Eliminating gang violence needs to start with a long hard look at the policies the Conservative government has enacted. Young people need to feel like they have opportunities and options. And these are the very things Duncan Smith and his party have spent the last eight years trying to demolish and dismantle.