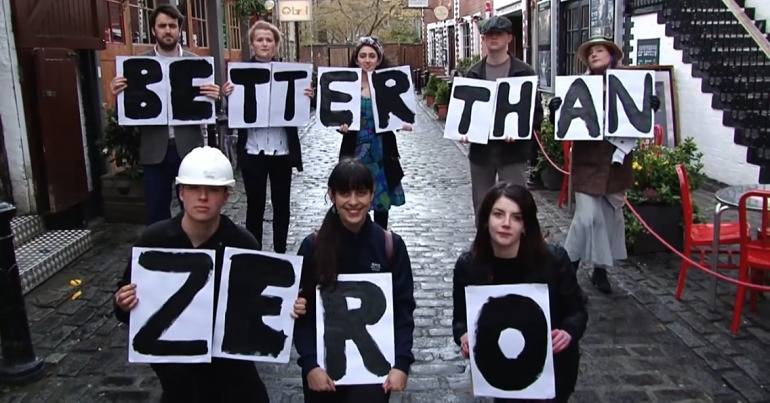 In September 2017, a group of workers were dismissed from the Grosvenor Cafe in Glasgow. It led to those workers winning a “landmark” case against Scotland’s largest hospitality employer.

As Glasgow Live reported on 23 August, the full panel Tribunal Court held that G1 had “breached the contracts of three claimants by failing to give notice or payment in lieu” and “unfairly dismissed” another two employees. The G1 Group, owned by Stefan King, operates a variety of bars, clubs and restaurants across Glasgow and has often been criticised for being a ‘bad‘ employer.

In 2015, the campaign group Better than Zero staged a creative protest to highlight the G1 Group failing to pay the minimum wage to many of its employees:

Better Than Zero supported the Grosvenor Cafe workers alongside UNITE the Union to win their case of unfair dismissal at an employment tribunal. What the pressure group has proven is workers must stick together to overcome bad bosses. In an age of individualism in the workplace, we need to return to collectivism. Only this can overcome employers’ greed that has resulted in the degradation of working conditions in the service sector.

Now Better Than Zero has shown that workers can use their power to improve working conditions for themselves and collectively resist exploitation. This could be the beginning of change in a sector where trade union membership has been historically low.

The ‘Better Than Zero’ Campaign

A spokesperson for Better Than Zero told The Canary a bit more about their campaign and why it was set up:

Through our high profile direct action and creative style of campaigning, we sparked a national conversation about precarious work, bad bosses, and the day-to-day experiences of workers in Scotland. It resonated with many who felt they had no way to challenge the exploitation. As the campaign grew, we received thousands of enquiries and reports on a monthly basis. The scale of the problem was, and still is, massive: bullying, sexual harassment, no breaks, insufficient rest periods between shifts, shift cancellations, tip theft, illegal wage deductions, and a complete disregard for workers’ health, safety, and wellbeing.

The spokesperson then spoke about the G1 Group case more specifically:

We are now at the stage where we have proper trade union branches in precarious sectors challenging this type of employer behaviour from within workplaces – UNITE the Union and the Bakers Union being two notable examples. The G1 Group tribunal victory is particularly sweet as that’s where it all began for us back in 2015: a group of young, angry, precarious workers took to the streets of Glasgow and brought the fight against exploitation right to the doors of the most notorious hospitality employer in Scotland.

We know that this tribunal win will show other workers that they too can join with their colleagues, form a trade union, take on the bosses, and win. Every win we have publicised since 2015 has brought more workers towards us and towards challenging their own bad boss.

Better than Zero has led the way in innovative resistance techniques. These have grabbed headlines and educated customers to understand the reality faced by many hospitality workers. It targeted the restaurant chain Las Iguanas in 2015 over its unfair tipping policy. After the demonstration, Las Iguanas management reviewed its policy and ceased using tips to part-pay the National Minimum Wage.

TGI Fridays also made the headlines in 2018 over a controversial tipping policy. UNITE the Union balloted members to stage strike action and began a series of public protests up and down the country.

Prior to 2018, TGI Fridays had avoided any strike action from their employees in the UK:

McDonald’s also faced strike action from union members over its use of zero-hours contracts in 2017. The strikes held by workers made history and got the public talking about working conditions in hospitality. In the service sector as a whole, workers experience some of the lowest pay and the most precarious working arrangements. McDonald’s gave into demands to let employees select which types of contracts they were on and a significant pay rise.

These working conditions are fucking unacceptable. They’re a national disgrace.

According to Gingerbread, both single parents and women are most likely to be on zero hour contracts and experiencing financial insecurity. In hospitality, these same women are facing widespread sexual harassment and poor career prospects.

Front-line service workers should not take these working conditions lying down. It’s unfair and it is exploitative. If workers are to stick together, join a union and stand up to bad bosses it could be the start of change.

The spokesperson for Better than Zero told The Canary how Scottish workers can fight back:

Better Than Zero hubs help workers to share information and tactics, and support each other with local issues. We run training events to give workers confidence and knowledge to run their own workplace campaigns. For anyone out there who is having a hard time at work, we say you don’t need to accept being treated like this. You and your co-workers need to stand up for yourselves and we can show you how.

The reality for many

As employees, we can opt to join a union and adopt a collective approach when addressing disputes in the workplace. As consumers, we can be selective about where we spend our money. We can be vocal to senior management about their employment practices and call out exploitation in a public way via social media.

The shite working arrangements will not go away on their own. Let us all stand in solidarity with those facing financial insecurity. And let’s no longer accept companies making a quick buck on the backs of those on minimum wage and zero-hours contracts.

Featured image via Better than Zero/YouTube