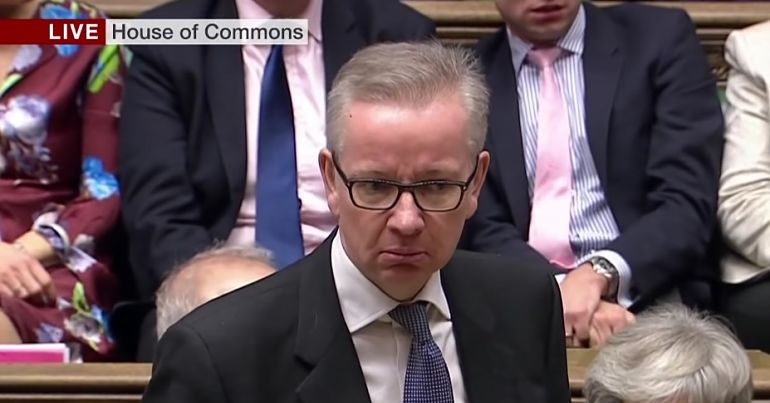 Michael Gove used his speech during the no-confidence vote on his government to do a hatchet job on Jeremy Corbyn. Clearly, there wasn’t much the environment secretary could defend about the weak and chaotic performance of his party, so he went on the attack instead.

During the BBC‘s broadcast of his ridiculous speech, however, a subtitle error occurred. And it perfectly summed up the state of British politics right now.

Deflection is one of the Tories’ strong suits, though. So, true to form, Gove put his all into making Corbyn the ‘villain’ in his speech. In particular, and again typically, he took aim at the Labour leader’s positions on national security. For example, Gove said:

He [Corbyn] wants to leave NATO. He wants to get rid of our nuclear deterrent. And recently in a speech he said ‘why do countries boast about the size of their armies? That is quite wrong. Why don’t we emulate Costa Rica that has no army at all?’

No allies, no deterrent, no army, no way can this country ever allow that man to be our prime minister

But the BBC‘s automated subtitles portrayed Gove’s comments as much more honest than that.

Instead of displaying the environment secretary’s comment about “that man”, the BBC told viewers he was rallying against a superhero:

Naturally, in the shit show we call the UK right now, some people disagreed with Gove’s anti-Batman sentiment:

But others agreed with Gove. Not necessarily with his assertion that the Labour leader should never be PM. But with his supposed claim that Corbyn is Batman:

Omg Jeremy Corbyn is Batman?!?!?! Is this why weve never seen him & batman in the same room together?! #MindBlown

Genuinely didn’t even realise it was a subtitle error. I had the tv on in the office, thought I heard him say batman, looked at the TV which seemed to confirm it and tweeted this. I mean, JC basically = batman, right? https://t.co/39QzqtBeYF

They have a point. At least, it would be easier to find evidence that Corbyn is in fact Batman than, let’s say, to demonstrate that this government is ‘strong and stable‘. It’s also frighteningly believable that the Conservative government would rally against a caped crusader who’s fighting for good. It has, after all, gleefully presided over homeless people dying on our streets, a million more children enduring poverty and austerity-linked excess deaths reaching 120,000 by 2017.

But there are clear differences between Corbyn and Batman, of course. The Labour leader isn’t a billionaire, for example. Nor does he have a butler. Likenesses can be found, though, in the ‘crusade’ both are on. Batman is a hero who, as a psychiatry professor puts it, fights a “lone battle against the evil forces of society”. And Corbyn’s mission? Well, let’s take Gove’s criticism. He claims the Labour leader wants to put Britons at the mercy of malign nation states by taking away their army. Gove is referring to a speech Corbyn made in 2012 to mark the 67th anniversary of the US nuclear attack on Hiroshima and Nagasaki. In it, he said:

A measurement of a society’s happiness and prosperity and success is not war, not weapons, not prison, not unemployment.

The measurement is education, health, inspiration, high levels of employment and not going to war around the world to steal the natural resources of others to enrich the already wealthy western society.

So, according to Gove, this guy – who’s calling for peace – is the villain. And Gove’s government – which has militarily and diplomatically provided support for Saudi Arabia to terrorise millions of poverty-stricken Yemeni people over the last four years – is our saving grace in this troubled world.

Gove is essentially saying that peace is evil and war is good. Or to put it in the words of George Orwell, from his book 1984: War is peace. That book came out in 1949 so Gove’s isn’t an original deceit. But it is the one he’s expecting us to swallow.

Unfortunately for Gove, there are lots of people who can see right through that tactic. As Alfred said in The Dark Knight:

Endure, Master Wayne. Take it. They’ll hate you for it, but that’s the point of Batman, he can be the outcast. He can make the choice that no one else can make, the right choice.