If we're banishing British citizens now, we should consider these people next - The Canary 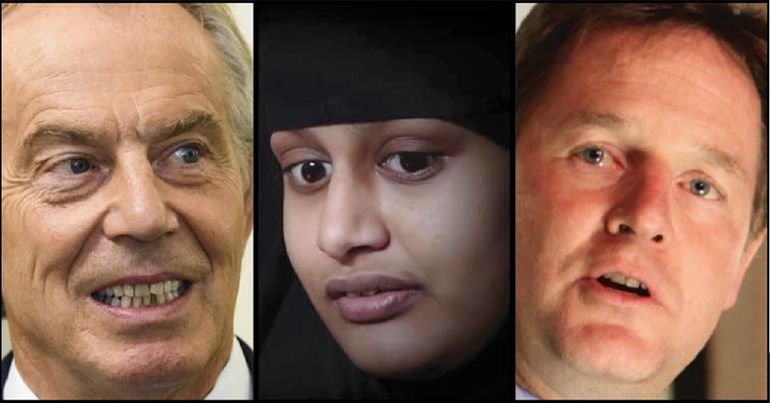 Contrary to international law, the United Kingdom effectively made Shamima Begum stateless. Ideally, we should follow international laws. But, as there’s precedent now, why not use that power to banish some other people we don’t like?

Unless, of course, there’s something about Begum which makes it easier for the state to convince people she doesn’t belong here.

A Mail on Sunday commentator asked the following:

Those people supporting the removal of Shamima Begum’s citizenship need to stop and think about what would happen if Jeremy Corbyn and John McDonnell had this power.

It is worth asking what would happen if any leader had this power. Because when states remove citizenship from people, that makes them other countries’ problems. Imagine if terrorists snuck into the UK and their country of origin washed their hands of them. This is what we’re creating the precedent for.

The world did ask this question, obviously, which is why we made the act of making people stateless illegal. But worries aside, that precedent exists now, so how should we use it?

The obvious choice is Dan Hodges himself – if only to make him finally right about something. There are bigger fish to fry than Hodges, though, so let’s look at people who – like Begum – went to work with hostile, foreign powers.

Sir Nick Clegg helped instigate austerity which has led to an estimated 120,000 deaths. Away from home, Clegg went to work for Facebook. This came after a string of revelations about how the company violated people’s privacy. There have also been accusations of Facebook being used to influence elections and spread fake news that destabilised several countries.

But is Facebook worse than Daesh (Isis/Isil)? And does it matter? If we’re ignoring the law, surely we can just ignore it as we see fit?

Still – it’s hard to imagine elements of the media getting behind Clegg’s banishment in the same way they did Begum’s. What is it about her that’s different?

Let’s look at some even worse Britons to see if we can figure it out.

The late baroness Margaret Thatcher’s son Sir Mark Thatcher inherited a baronetcy. He also tried to overthrow Equatorial Guinea, as one does. According to the Guardian:

Sir Mark attempted to avoid implication in the illegal coup, but was found guilty by a court in South Africa, where he was living at the time, of having provided finance for helicopters to be used in the overthrow. He was fined $500,000 and given a four-year suspended prison sentence.

So did we banish him? Err, no. We did discuss potentially stripping him of his title, but we ultimately couldn’t even do that. Sir Mark had friends in high places – namely his mother – who allegedly knew and approved of her son’s coup attempt.

Another person who Thatcher had a fondness for was Tony Blair. But is it fair to compare Begum to Blair? Probably not. She was groomed as a 15-year-old to go and fight in a destabilised country on behalf of Daesh; Blair helped instigate the ‘illegal war‘ that “destabilised the entire Middle East” and led to the formation of Daesh.

So no – obviously you can’t compare the two. Blair is considerably worse. But imagine the looks you’d get if you suggested deporting him to George W Bush’s dude ranch.

So why is it easier for some people to imagine Begum being stripped of citizenship than him?

The constant barrage of negative press about British Muslims serves to ‘other’ them. As Miqdaad Versi said in 2016 (and things haven’t improved since):

More than half of Britons see Islam (the mainstream religion, not Islamist fundamentalist groups) as a threat to Western liberal democracy. Over 30 per cent of young children believe Muslims are ‘taking over England’ and hate crime against Muslims continues to rise, up by 70 per cent in the last year [2015], according to the Metropolitan police.

In this situation, you can see why some people find it easy to think British Muslims don’t truly belong here; that their citizenship is up in the air. The un-personing of Shamima Begum will only make that situation worse. The government may claim to be acting for our safety, but what it’s done only makes life more tenuous for UK Muslims.