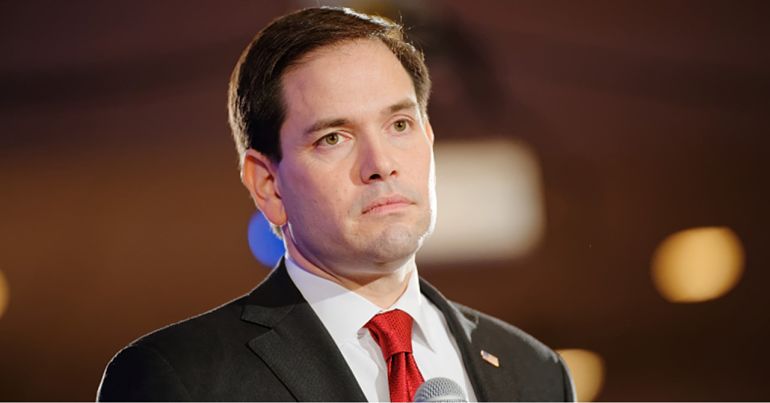 In between tweeting Bible passages and sending thinly veiled death threats to foreign heads of state, US senator Marco Rubio seems to function as a full-time fake news reporter. Rubio was among the first to falsely claim that Venezuelan state forces had burned ‘humanitarian aid’ trucks. On 10 March, he claimed without evidence that “80 neonatal patients” had died in Venezuela due to a power outage. Now, Rubio has written the most embarrassing piece of nonsense yet.

In a now-deleted tweet, Rubio claimed on 9 March that:

Today another transformer explosion at the German Dam in Bolivar State caused another massive blackout.

The result? Critically ill patients have died, the #Caracas metro remains out of service & few if any flights have arrived at or departed from Caracas in over 20 hours.

Germán Dam, the reporter who published the story about the explosion of a transformer in Bolívar, informed Rubio of his hilariously embarrassing mistake:

Senator @marcorubio, an important transformer exploded in Bolívar and that, in part, again collapsed the Venezuelan Electric System; however it was not in a dam, much less german.
My name is Germán Dam, I am one of the journalists who published the information.
😎🤘😊 https://t.co/DicWDJzlfQ

Rubio tried to cover his tracks, but the damage was already done. Various journalists and commentators seized on his aggressive peddling of pro-regime change falsehoods:

Another clueless US disinfo masterpiece invented! Senator Marco Rubio told the world about the explosion at the 'German Dam' in Venezuela.
Reporter Herman Dam was forced to explain to the senator that he was not a dam, but only a journalist who reported the substation accident😜 https://t.co/5qXPynt2m5

Little Marco making melodramatic pronouncements about a faulty German Dam in Venezuela, and then it turned out “German Dam” was actually the name of a reporter, is so hilariously embarrassing. But such is the life of Little Marco, who has morphed into a hysterical Twitter troll

A hydroelectric complex was sabotaged, and Rubio claimed it was "German Dam" — but that was the name of the journalist who reported ithttps://t.co/xQH1Kumm9d

Rubio’s seemingly endless stream of pro-regime change nonsense not only highlights the US government’s rabid lust for war. It also demonstrates that the people agitating for regime change in Venezuela are total incompetents.