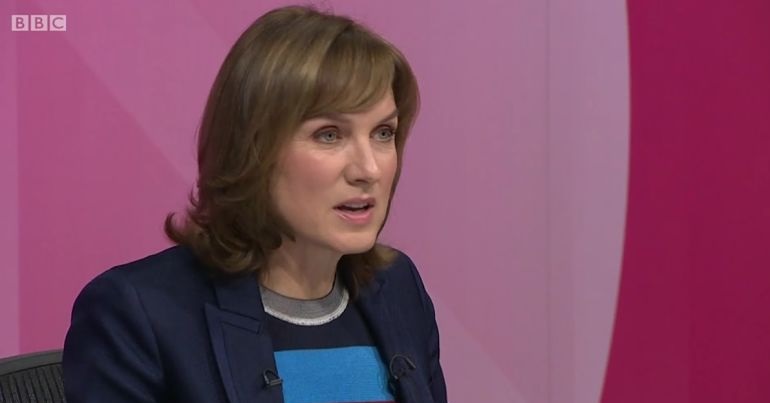 BBC Question Time took place in Belfast on 21 March. During the programme, host Fiona Bruce showed how far she’ll go to protect the Conservative government – and by default, its partners in the DUP – from scrutiny. Because one audience member arguably asked the most important question of the night. But thanks to Bruce’s diversion tactics, no-one ever heard the answer.

#bbcqt Fiona, it’s called questiontime! That’s meant for the audience, not your diversionary tactics that don’t allow their questions to be addressed.

It’s a matter of trust

As usual, most of BBC Question Time was taken up with Brexit. But audience member David Duncan did also ask a question about the lack of a functioning government in the north of Ireland for the last two years. The assembly in the country, known as Stormont, broke down in 2017 due to financially damaging mismanagement of a renewable energy scheme by the DUP. Duncan asked:

With the DUP and Sinn Féin still in deadlock, should the Northern Ireland secretary of state resort to direct rule?

This is a controversial question. Because the UK government having “direct rule” over the north of Ireland, as it did during the conflict in the country, has obvious ramifications. It, for example, strengthens the argument for a referendum on the reunification of Ireland. Furthermore, there are serious issues with the UK government’s impartiality right now. This was raised by another audience member:

How can we expect the British government to act as independent co-guarantors of the Good Friday Agreement considering they’re in bed so close with the DUP?

The audience widely applauded this. Because the Tory/DUP deal struck in 2017 is critical to any question of direct rule, the Stormont Assembly and, indeed, Brexit. But Bruce made sure no-one got an answer to it.

Shall we just get on with it?

After one further interjection from an audience member, who agreed with the previous speaker, Bruce said:

A lot of views, Jeffrey Donaldson, coming from the floor. Not least, an impassioned plea to just get the assembly up and running… You’ve laid the blame firmly and solely at the feet of Sinn Féin, is there anything that you feel the DUP could be doing?

So, Bruce omitted any reference to that critical question in her moderating of the discussion. She just directed the conversation in a way that allowed her to throw a softball question at the DUP. Of course, what she should have done at that point was confront the Conservative minister on the panel, Tobias Ellwood, with that very real concern. But instead, she just brushed over it and granted an opportunity to the DUP’s Donaldson to reiterate how much his party was ready to go back into government or accept direct rule.

Fiona Bruce is making this programme irrelevant. She ignores any comments that do not fit her narrative #bbcqt

Power-sharing arrangement in name, not nature

Of course, the DUP is fine with either option. Because its deal with the Tories effectively means that either way, it has the upper hand. Sinn Féin, meanwhile, will have an uphill battle to implement its agenda. As the party’s John O’Dowd explained, it can only see the assembly reconvened when:

the Good Friday Agreement, that internationally binding agreement, is implemented in full and people have access to the rights in this part of Ireland that you have in the rest of Ireland and in England, Scotland and Wales [such as same sex marriage and language rights].

O’Dowd accused the UK government of ‘failing’ to implement the Good Friday Agreement – which guarantees a power-sharing arrangement between Republicans and Unionists – because it’s “in hock to the DUP”. The government needs to answer for that recklessness. Because it impacts on the north of Ireland, Brexit and the United Kingdom as a whole.

Clearly, though, we won’t see it held accountable for it on BBC Question Time with Bruce at the helm.