Corbyn nails it. Theresa May offering to resign for her deal shows Brexit was always about the Tory party. - Canary 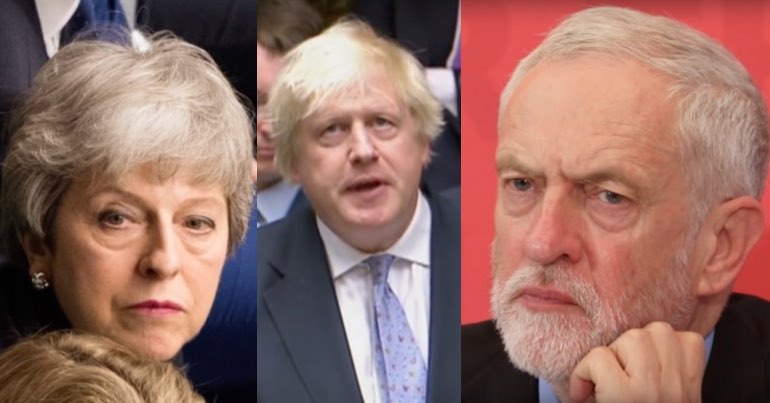 Theresa May’s offer to resign in exchange for the votes of her party’s extreme “Brexit fanatics” is the final degrading act in what history will judge an abysmal spell as prime minister.

And as Jeremy Corbyn has pointed out, this pathetically weak gesture shows what Brexit was about all along: the Conservative Party.

“Right for our country and our party”

May has reached the absolute pits. She fails to command the support of her DUP allies, or her own MPs.

The BBC reported that May told Conservative MPs on 27 March:

I am prepared to leave this job earlier than I intended in order to do what is right for our country and our party.

Note how she claims to be acting in the interest of country first and party second. It’s a point Conservative loyalists were quick to echo on social media:

Tonight @theresa_may has put her country first. I hope my @Conservatives MP colleagues can find it in themselves to do the same. and #backthedeal 🇬🇧

Other Conservative politicians gave first-hand accounts of her emotional climb down that require sick bags to listen to:

Theresa May had "tears not far from her eyes" as she told her MPs she would quit if they accept her #Brexit deal, says Conservative MP George Freemanhttps://t.co/0zbJ8cXo7G pic.twitter.com/kBOJVvgkDa

But others were quick to call bullshit on the idea of May as a selfless national servant sacrificing herself for ‘the good of the realm’.

Corbyn: it’s “about party management, not principles or the public interest”

Corbyn was quick to call out May’s actions for what they really were, party self-interest:

Theresa May’s pledge to Tory MPs to stand down if they vote for her deal shows once and for all that her chaotic Brexit negotiations have been about party management, not principles or the public interest.

A change of government can't be a Tory stitch-up, the people must decide.

And Tom Kibasi, director of the Institute for Public Policy Research, also told it like it is:

Conservative MPs who back a dreadful #Brexit deal for our country because Theresa May will resign as Prime Minister have revealed their priorities: Party over country. A disgrace.

Others on social media highlighted the hypocrisy of arch-Brexiteers such like Boris Johnson, suddenly deciding to support May’s Brexit deal:

May: Accept the deal and I’ll resign and you might get the Big Job.

Johnson: I will vote for the deal. Let us praise the PM for her dignity and sacrifice.

U.K. politics in a nutshell

And writer Will Hutton expressed his view on the prospect of ‘prime minister Boris Johnson’:

Boris Johnson is contemptible- grinning from ear to ear after the 1922 Committee tonight, contemplating his manoeuvres may have landed him the Prime Ministership. He is a charlatan and a shit, not competent to run a whelk stall . He will split country and party.

Considering May’s historic Brexit record, her proposal to hand over power to another Tory becomes outrageous.

She is effectively saying: ‘Please vote for this crappy deal you hate. And in exchange, I’ll give you a shot at the keys for No 10. You can then implement your fantasy of an extremely deregulated British state, tax breaks for the rich and decimated workers rights.’

But let’s remember some important facts about May’s time as the Brexit PM.

Firstly, Theresa May’s hard vision of Brexit was given no majority by the British public at the 2017 general election. Her vision, or so-called ‘red lines’, included among other things:

Yet despite losing her majority, May continued to act as Britain’s one true ruler. She was belligerent and Thatcheresque, a Queen Elizabeth the First 2.0.

Secondly, to help uphold her delusion of strong executive government, she handed the DUP a bung to get a working majority. People were outraged for about a week. But then the media forgot all about it and just acted like it was part of a merry political game. And so May continued to act like a Brexit dictator, refusing to compromise on her deal with other parties.

Thirdly, her EU negotiations, which appeared to have no direction for months, were a shambles. Later her government was held in contempt of parliament (the first ever) for refusing to publish legal advice given on her Brexit deal. The deal itself then lost by the biggest margin in history. Then it lost again. She tried to keep bringing the deal back over and over again, against the will of parliament. She apparently believed she could run down the clock, scare the shit out of MPs fearing a no-deal Brexit and bulldozer it through anyway. Until, that is, the speaker humiliated her, called it unacceptable, and refused to accept it again in the same form.

We could go on. And yet despite all of the above, like a crawling Zombie torso mindlessly clinging on to existence, May hung on to power. She refused to resign again and again, or to call a general election. This was despite votes of no-confidence in her government and in her as her own party’s leader.

Despite this shocking record of personal failure, May thinks she can now bribe her own party. She’s effectively promising to hand over power to a new Conservative prime minister-in-waiting. A prime minister nobody in the UK will have voted to hold that role. And likely somebody holding an extreme right-wing, deregulated vision of Brexit Britain’s economy. Nobody in all seriousness can claim 17.4 million people voted for that.

She’s throwing the UK under a bus to please her own party, despite all the chaos and anxiety she’s caused citizens. And apparently, she’s doing all this to scrape a legacy for herself to satisfy her own vanity.

The lack of humility and sense of entitlement Conservatives – and May in particular – display is genuinely breathtaking.

But the Conservative Party using Brexit to help itself is the norm.

After all, the Brexit referendum was called by Conservative prime minister David Cameron to please his own party. The president of the EU Council, Donald Tusk, even claimed Cameron admitted this to him in private. This is also the opinion of former Conservative chair Sayeeda Warsi.

Brexit is, and always has been, a self-indulgent Tory psychodrama. It’s the masochism of an entitled club of privileged spivs gambling away the country’s future in an inconsequential public-school debating society. And it’s the sad fantasy of a group of middle-aged men living out their childhood dreams of doing battle with foreigners.

And so May’s self-sacrifice is nothing of the sort. It is another unearned reward for a Conservative Party that deserves putting in the ground over Brexit.

As Corbyn said: “A change of government can’t be a Tory stitch-up, the people must decide”. Call an election, now!