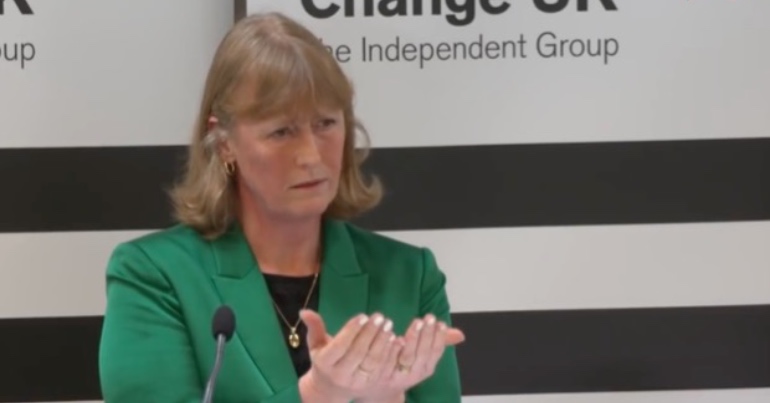 They say politics is the art of communication. But if that’s the case, centrist party Change UK is failing.

In the latest episode of centrist cringe-gate, former Labour MP and vote of no-confidence loser Joan Ryan, gave David Brent a new lease of life with a failed attempt at a choreographed hand metaphor. And people were less than impressed.

As The Canary recently reported, Change UK’s amateurish new logo, battle bus, and self-absorbed campaign literature have already provided plenty of fodder to laugh at. In short, its European election campaign is tanking. But the latest excruciating stunt might be the defining nail in its political coffin.

Change UK MP Joan Ryan: “Can everyone look at their hands please?”

****cue everyone holds out their hands in front them****

At this point there was only one thing on everyone’s mind: please god tell us there’s video evidence? And yes, the media gods were good to us:

Change UK's Joan Ryan: “Can you just look at your hands please?”

** everyone holds out their hands in front them **

“That’s it, it’s there, that's the answer to this. It's in your hands.” pic.twitter.com/3SvfTIsy4D

On social media, Ryan’s hand job was the gift that kept on giving. And within her palms, people found all sorts of hidden meanings.

Say hi to your buddy Angela Smith for me! pic.twitter.com/YzScQ2mf2E

Others used it as an opportunity to highlight Ryan’s voting record:

Joan Ryan consistently voted for the Iraq War. Those hands have blood on them. https://t.co/VEcH3wzRfz

Fear not, Joan reassures us, “it was really funny”

However, according to Ryan, social media just failed to understand her great humour:

You humourless lot! I love this, it was great everyone joined in . It was really funny. https://t.co/usbxAsajLV

But predictably, that didn’t help matters either:

Even David Brent got in on the action:

Add this to the end of your speeches, @joanryanEnfield. #Motivation pic.twitter.com/JXzUoNFa8X

And Young Labour’s international officer Marcus Barnett recalled an excuse Ryan had given for not calling a by-election when she quit Labour:

Joan Ryan actually believes that her individual qualities and skills inspired voters to turn out for her in such huge numbers in 2017, "in spite" of Labour and Jeremy Corbyn pic.twitter.com/FOnevLTAQL

But there’s no doubt Ryan and co can look forward to seeing many more hands in the future, as we wave them off into the political wilderness.