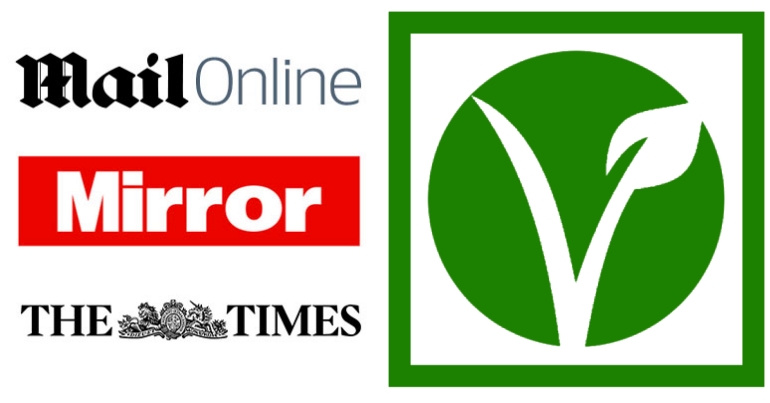 The image on this article was updated on 3 April 2020 following a request from the Vegan Society to not use its logo.

British media reported that Swedish parents were convicted for “gross negligence” after their child became dangerously malnourished. But headlines have focused on the family’s plant-based diet. And by doing so, the media is pushing myths about veganism.

A court in Gothenburg, Sweden, jailed two parents for “gross negligence causing bodily harm” on 23 May. Their 18-month-old child was dangerously malnourished and “close to death” when her parents took the child to hospital.

UK papers widely attributed the problem to the family’s diet. For example, the Mirror reported that “Parents who raised baby girl vegan jailed after tot nearly starved to death”. Meanwhile, the Daily Mail emphasised that the couple “raised their baby as a VEGAN” in its headline. But it wasn’t just tabloids. The Times said the parents put the child on a “vegan diet that nearly killed her”.

But these headlines are wildly misleading.

As the Times pointed out in its article, when the girl arrived at hospital she was “unconscious…[and] also had a fractured jaw and bleeding on the brain”. This was, presumably, why her parents took her to hospital. And whilst there, doctors discovered the child was malnourished. They subsequently called the police.

But other details about the family’s life suggest the problem was more than just what they ate. According to Swedish news website The Local, the court said:

her parents did not even report the birth to any authority, have her checked at a paediatric centre, or even weigh or measure her growth. Nor has the girl been vaccinated or examined by a doctor

The girl’s father told the court that these and other actions were taken to “avoid turning her into a person who is driven by her addiction”. Furthermore, the mother said the family ‘lived as nomads’ and that they got by because “most of what we need comes to us… the universe takes care of us”. The girl’s diet was, however, highlighted by the court as being “far from sufficient or adapted” for the girl’s age.

Journalist Jai Breitnauer made this point in an article for New Zealand publication the Spinoff. Writing about a recent Australian court case in which a malnourished toddler had a plant-based diet, Breitnauer said:

This child was being starved. It doesn’t matter whether the modicum of nutrients that were permitted to enter this darling baby’s body were meat or plant based, the important fact is that she wasn’t getting enough. She was neglected, and that abuse should not be hijacked by the anti-vegan brigade.

The NHS says that babies and children can get all the nutrients needed from a “well-planned varied and balanced diet”. A number of medical studies confirm this. But this is true of any diet, whether it contains animal products or not. In fact, one study suggested nearly four million children in Britain are at risk of malnutrition. But this isn’t because they’re vegan. It’s because unhealthy food tends to be cheapest and austerity has put millions of families in poverty.

But the papers aren’t headlining systemic problems such as capitalism and government policy for millions of malnourished children. The outrage is highly selective.

The Swedish girl’s diet must have contributed to her malnourishment. But anyone would be malnourished if they had a long-term diet of just two or three foodstuffs, whether that included animal products or not. The problem is that the parents didn’t respond to the clear needs of their child. They chose to ignore the fact she was “roughly half the normal weight for her age”. As did the couples’ friends with whom they stayed, apparently.

Plenty of parents raising their children on a plant-based diet wouldn’t let that happen. I have friends with children that have been vegan their entire lives and continue to thrive. And anecdotal evidence from across the world suggests children have no problems without animal products so long as parents are attentive to their needs.

The choice by the Mirror, Daily Mail, the Times and others to focus on veganism rather than neglect in their headlines is no doubt due to the rapid rise of veganism today. It’s a hot topic and will catch readers’ eyes. But it’s also misleading; falsely portraying veganism as inherently unhealthy for babies and children. At worst, it feeds into a culture willing to make plant-based diets for children illegal, as suggested in Belgium and Italy.

Not all vegans are healthy, by any means. Nor are all ‘carnists‘ – people that eat meat. However, this is lazy journalism that seriously misrepresents a case about neglect to bring in more readers. And that’s utterly wrong.