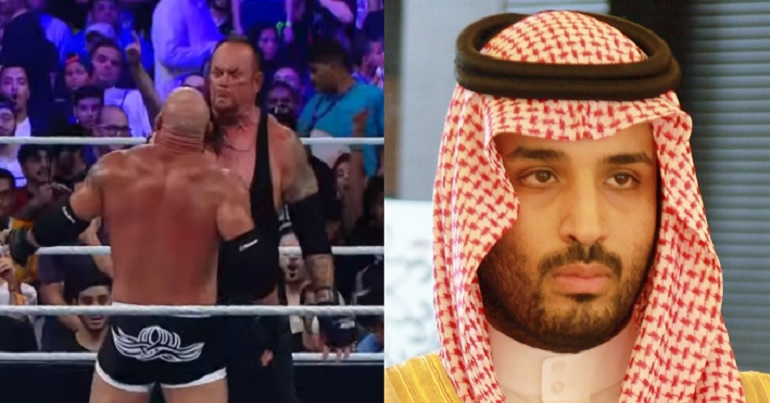 The match was riddled with mistakes – some of which were extremely dangerous. One even led to Goldberg suffering a concussion. Such botches are to be expected in a bout between two men whose regular wrestling days are behind them – one of which is reported to have had a hip replacement.

Asking two men to wrestle at a major match in sweltering heat after long careers of gruelling work and physical deterioration is bad enough. But it doesn’t even scratch the surface of why this show was morally questionable.

Super Showdown was the third show WWE held in Saudi Arabia. Naturally, these shows have been highly controversial.

The first saw the company face heavy criticism for featuring no women wrestlers, allegedly due to Saudi Arabia’s stances on women’s rights. The second of them took place at the height of the controversy surrounding the murder of journalist Jamal Khashoggi. All three have taken place against the backdrop of Saudi Arabia’s military intervention in Yemen, which has led to a famine and the death of at least 85,000 children from starvation. Some of WWE’s top stars including Kevin Owens, Daniel Bryan, and John Cena have subsequently boycotted the shows.

Super Showdown was even more controversial than usual. Reports allege that the Saudi government explicitly requested that Sami Zayn not be allowed to appear on the show. The reports also claim this was due to his Syrian heritage.

Unsurprisingly none of this has been good news for WWE’s public image. But this is apparently small fry to a company which some have suggested made over $50m dollars from Saudi Arabian shows in 2018.

The Saudi shows are one of the most talked about controversies in WWE right now. But they’re far from the only time the company has got its hands dirty.

The company has a long history of utilising story-lines within its shows that rely heavily on stereotyping, racist tropes, and sexism. That includes caricatures of disabilities, Arab characters portrayed as terrorists, and women being publicly mocked for their weight.

WWE’s ongoing dodgy practices extend outside of the ring too. Reports have emerged that WWE personality John Bradshaw Layfield (JBL) has a reputation for routinely bullying others in the company behind the scenes. This includes claims that WWE commentator Mauro Ranallo left the company due to emotional distress resulting from JBL’s bullying. Such incidents are regarded as extending well beyond JBL, and are allegedly endemic in the company.

More recently, John Oliver put a spotlight on the company on Last Week Tonight. He brought to mainstream attention what many wrestling fans had known for some time.

Oliver’s show highlighted the numerous high profile early deaths of professional wrestlers like Eddie Guerrero and Randy Savage. It drew on work from Five Thirty Eight which tracked the death rate among professional wrestlers, athletes in other sports, and the general population. The results were staggering. They showed wrestlers from WWE had a higher early death rate than all groups they were compared with.

Oliver also drew attention to the fact that WWE does not provide health insurance for its performers – in spite of the highly dangerous work they do. He further explained the dubious employment practices of the company which treat its performers as “independent contractors”. This is despite them having to work fixed dates and having exclusive contracts.

Links to Saudi Arabia, problematic stories, and sub-par employment practices are no surprise in WWE. Especially when you remember its former CEO Linda McMahon ran as a Republican for the US Senate twice, and until recently was a member of Donald Trump’s cabinet.

The truth is that despite WWE being the largest wrestling company in the world, it is well behind the times. Other wrestling promotions have picked up on this. And they’re offering a genuine alternative.

Recently, a new promotion – All Elite Wrestling (AEW) – got off the ground, helped by having the name value of former WWE performers Cody and Dustin Rhodes, and Chris Jericho. Its inaugural show – Double or Nothing – sold 11,000 tickets on May 25, and nearly 100,000 people bought the show on pay-per-view.

The show was a huge success. It was one of the biggest professional wrestling events in modern wrestling history to take place outside of WWE. So it seems AEW is starting to offer a genuine alternative to WWE.

That alternative isn’t just in relation to the wrestlers involved or the style of wrestling. It’s also an alternative in terms of its business practices. AEW has claimed it intends to equalise pay between men and women who perform at the same level on the card. The company is also exploring health insurance packages for its wrestlers and offering a less arduous schedule for its performers than WWE does. And AEW made specific provisions to make Double or Nothing accessible for autistic fans.

All of this shows that AEW is making positive steps to improve the wrestling world. Following in the footsteps of the likes of the UK’s feminist promotion Pro Wrestling EVE, AEW is setting out a progressive future for the wrestling business.

And it’s overdue. For too long, WWE has been engaging in dodgy business practices, pushing reactionary narratives, and maintaining unsavoury international links. It’s time for a change. Either it will come from WWE itself, or other promotions will replace it.