On 20 June, Conservative minister Mark Field reportedly ‘assaulted’ Greenpeace activist Janet Barker at the bankers’ banquet in London. The incident caused widespread outrage. On 21 June, Field was suspended. But before that, the BBC‘s chief political correspondent Laura Kuenssberg used the incident to score a cheap political point against Labour.

Shortly after the incident, Kuenssberg responded to Labour’s Dawn Butler who called the incident “horrific”. But there was no support. Instead, Kuenssberg stated it’s “clear Labour will push this tomorrow”:

Responses came in thick and fast to her tweet: 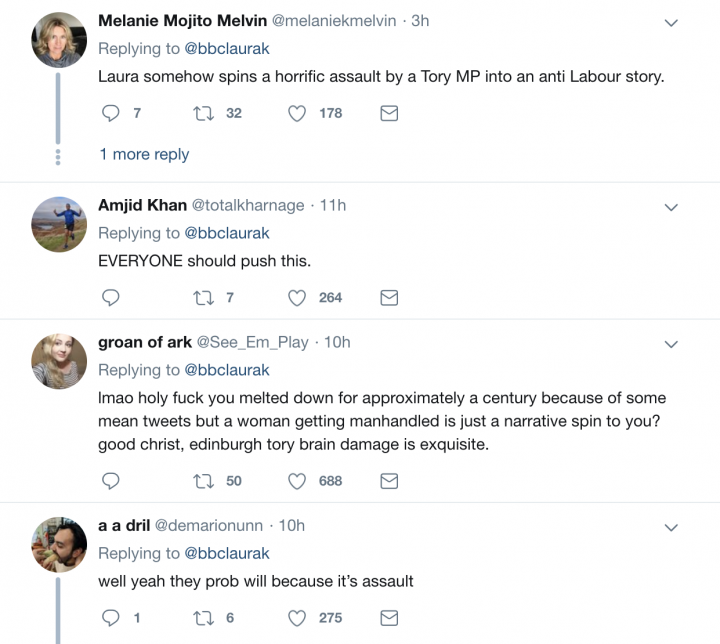 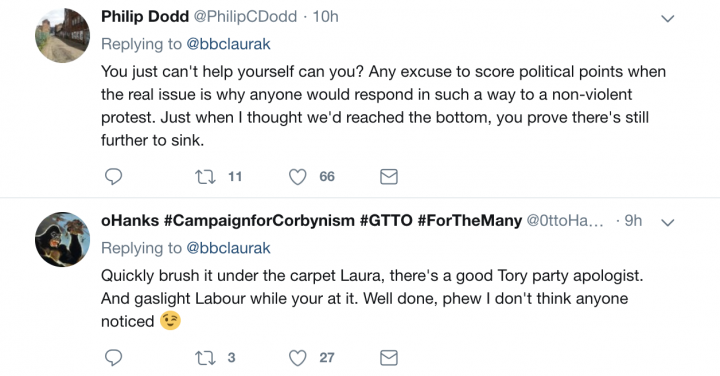 And let’s not forget, this is the same  – allegedly impartial – journalist that even the BBC had to admit “broke accuracy and impartiality rules” in 2017 during a report on Jeremy Corbyn:

Kuenssberg said she had asked Mr Corbyn a particular question, they then played video of his response … to a DIFFERENT question, then claimed she didn't intend to mislead?#corrupt #journalism #fakenewshttps://t.co/DjaCkOrQ0P

For a start, she used Butler’s response as her launch pad. As shadow minister for women and equalities, Butler’s rightly placed to stand up to this attack. And while this wasn’t a racist attack, Butler’s experience of inequality is lived. She’s faced “so many” racist incidents and was once ‘mistaken’ for a cleaner in parliament. In a separate incident, a Tory MP also told her to leave the members’ terrace and said: “they’re letting anybody in nowadays”.

As one of around 40 peaceful Greenpeace activists, Barker protested to make an important point. Their action intended to draw attention to the impact of the current climate breakdown. As Greenpeace’s head of politics Rebecca Newsome told Sky News:

We are living in a climate emergency. Business as usual is no longer an option. The people in that room, including Philip Hammond… Mark Carney and many of the financiers who prop up our current fossil-fuel-based financial system need to wake up to this reality… This was an important, peaceful protest.

The assembled guests are also architects of multiple layers of violence. From austerity to arms sales, and from war to soaring poverty, homelessness, and inequality, these people destroy lives on a daily basis. Little wonder then that each and every one of them just sat there and watched the attack, basking in privilege, entitlement and whiteness.

As for Kuenssberg, she scraped the barrel yet again. But using the shadow minister for women and equalities to take a snide dig at Labour is really going too far.