The mainstream media wouldn't publish this story on the Guido Fawkes scandal, so we are - The Canary 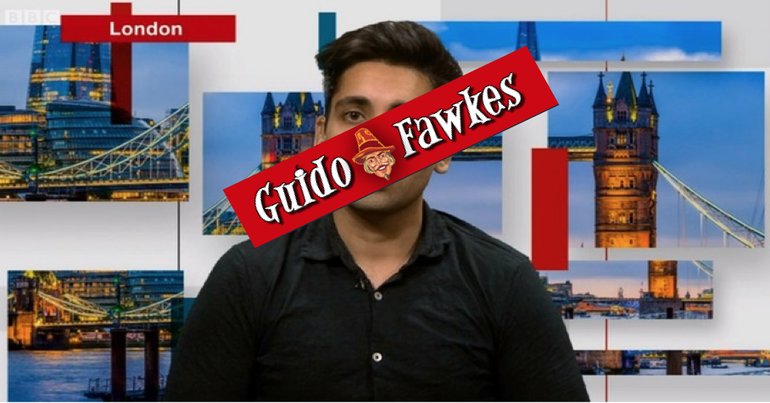 This story below is authored by Ally Fogg. It discusses the serious implications of the Guido Fawkes blog doxxing and denouncing an audience member on the BBC’s Our Next Prime Minister debate. It was originally published at Medium under the headline ‘The Aman Thakar scandal is the nadir of a digging & doxxing culture’. We are republishing here with the author’s permission, for reasons the author lays out in his own words below.

The Canary is choosing to republish this piece because we feel strongly that this conversation needs to happen. We won’t be naming and shaming the outlet either, out of respect for the author’s wishes. We just want the widest number of people possible to read it. Because it’s excellent, and vital. We could be charged with making the same mistakes in past work. And reading this gave us pause for thought. It made us reflect on our own approach to such issues in future. Any piece of writing that can do that deserves to be published.

Why this story is not being published in the mainstream press

After I tweeted this the other day, I was contacted by a commissioning editor on one of the major national media outlets who wanted me to expand it into an opinion piece.

Leaving aside the merits of the specific complaints, does no one else find it deeply creepy & disturbing that right wing attack dogs from Guido & beyond went about doxxing members of the public for just wanting to ask a question to the Tory leadership debate?

I don’t do much blogging/ hot-take-peddling these days, but it was something I felt strongly about & happily agreed. I submitted a piece. Shortly after, I was emailed back with a heavily edited version & asked for my consent to the edits. I had to say no, for one reason alone.

The edit had removed all criticisms of the mainstream media and professional journalists, who were, in my opinion, by far the biggest culprits in the story. We had some to & fro in search of a compromise but eventually had to agree to differ.

So, to cut to the chase, the article that didn’t appear is here, for you to peruse at your leisure.

The section that we disagreed about was primarily this. I offered to moderate the intemperate wording, but the issue was not the strength of the criticism, but any criticism at all.

You’re probably wondering why I’ve decided not to name the paper. Three reasons. Partly that the editors I engaged with were entirely respectful, professional and polite and the issue was the editorial policy they were enforcing. I’m happy to return that courtesy.

Partly because the same paper had actually been one of the better ones…covering Aman’s story and were one of the few to give his side of the story, and it would seem unfair if they end up being the ones who get dragged.

But mostly it’s because the editorial policy they were enforcing is, in my experience, pretty much identical to every other paper & outlet in the country. They all do this. They all routinely circle the wagons around other journalists, and refuse to criticise, even when criticism is quite clearly needed and deserved. It is not a problem with one paper, but with the whole of the British media, and it is a MAJOR reason why journalists can so often behave appallingly with impunity, knowing no one will hold them to account.

On Tuesday, amid the squalor of the BBC’s debate, Our Next Prime Minister, a viewer introduced as ‘Aman from London’ asked a question that many British people wanted to hear.

In the event that you are elected Prime Minister, when will you do the right thing and call a general election?

The question caused minimal problems to the five candidates, who batted it away with diverse paraphrases of “I won’t.” It was a rather different story for Aman.

Within hours, the Guido Fawkes blog identified him as legal assistant Aman Thakar, a Labour Party activist who briefly worked at party HQ during 2018. They apparently trawled through his catalogue of social media posts and uncovered this Tweet: “Hitler’s abuse of the term nationalism is, to me a nationalist, the most harmful part of his legacy.”

These words, turning a blind eye to the Holocaust and other crimes of the Nazi regime, were shocking enough that Thakar was immediately suspended from work. By the next morning, he was splashed across the front page of the Daily Mail, identified by name on BBC News, and featured prominently in pretty much every other national newspaper.

Just another social media millennial, hoist on the petard of his own bigoted opinions? Well, no. Thakar is no anti-semite or Holocaust revisionist. As any journalist with a trace of professional diligence could have uncovered in seconds, the Tweet was a reply within a conversation about the alt-right student activist Candace Owens. Aman Thakar was parodying her remarks to highlight their toxic stupidity.

Thakar, who never denied or hid his political allegiances or misrepresented himself to the BBC or anyone else, has now had his life and career ripped apart, been smeared as a Nazi-apologist and been dragged across the national press only for having the temerity to pose a question to candidates for prime minister.

The episode would shame the team at Guido, had they any shame to spare, but it absolutely disgraces the numerous ‘respectable’ political journalists who repeated the calumny without performing the most cursory factual checks, either by sharing and retweeting or worse, turning this scurrilous smear into mainstream reporting under their own bylines.

This gross injustice represents a nadir of an ugly recent trend in politics, to treat members of the public who appear on political debate shows as fair game for digging, doxxing and character assassination. It happened to another questioner from Tuesday, Abdullah Patel, an Imam who had previously Tweeted (truly) offensive remarks about Israel and sexual violence. He too has now been suspended from work. His Tweets are indefensible, but it remains baffling why anyone considered it necessary to disinter his ugliest opinions in response to a perfectly legitimate question about Islamophobia. One might also reasonably ask if it’s coincidence that it was the only two questioners from minority ethnic backgrounds who suffered this inquisition?

All this is deeply corrosive to political engagement. It is hard to see what happened to Aman this week and not conclude that participating in public debate may simply not be worth the risk. Who among us does not have some ill-worded Tweet or Facebook update which could be ripped out of context and used to destroy our reputation? Social media mining, trawling and doxxing can and should be understood as a blunt weapon to terrify members of the public out of political involvement.

This is far from restricted to the right. Leftist Twitter is infested with self-appointed sleuths crowing with glee as they ‘expose’ some bigmouth on Question Time as a Conservative councillor or whatever. Most of this stems from a silly myth that contributors to politics shows should be ‘neutral’ or free from bias. In truth, the vast majority of people with an interest in politics also have allegiances and histories of activism. It’s broadcasters’ job to ensure partial opinions are balanced by other partial opinions, not that all contributors are impartial. Meanwhile, the significant difference when the left dig and doxx, of course, is that those revelations tend not to be picked up and broadcast to millions by a large swathe of the nation’s media.

The paranoid scouring for ‘Tory plants’ or for ‘Labour stooges’ has become tedious and corrosive. Of course, it’s absolutely essential that viewers and voters are able to hold broadcasters to account and be alert to misrepresentation and falsehood (Newsnight’s dodgy vicar, anyone?) Most of us, whether political bloggers or just Twitter users have participated in this grim tit-for-tat. Perhaps it is time for all of us to step back and ask ourselves why we do it, and whether we are helping.

We could begin by resisting the temptation to dig, and by refusing to amplify the efforts of those who do. If that applies to us all as social media users, it holds many times over for those who are paid to know better.