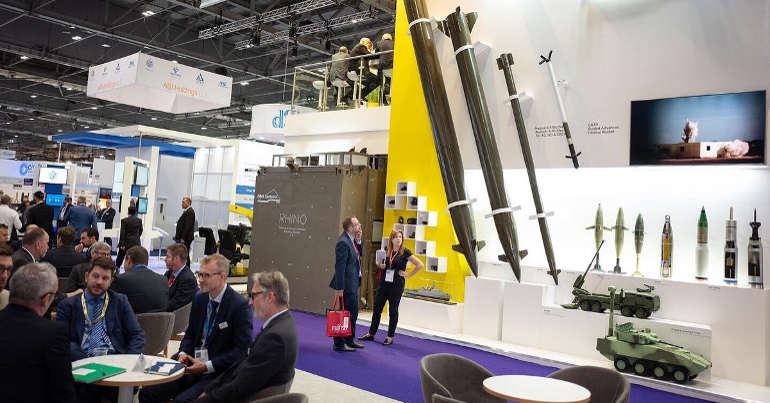 Boris Johnson has suspended parliament. His “unlawful abuse of power” has shocked many people around the country into taking to the streets and forming assemblies across the UK. Many are marching under the banner of “defend democracy”.

But there is no democracy to defend in Westminster. If we want real democracy then we need to create it.

Every two years, the world’s largest arms fair takes place in east London. The exhibition is attended by thousands of international arms dealers and manufacturers. Representatives of some of the world’s most repressive regimes attend the fair to shop for weapons.

At least 116 people were arrested protesting against this year’s event. Protesters have been blocking the two vehicle gates of the ExCeL Centre.

This year’s show of resistance is the latest chapter in the 20-year history of opposition to Defence Security and Equipment International (DSEI). Over the years, people have risked arrest countless times in their determination to prevent the fair from taking place.

In spite of this massive public opposition, the arms fair enjoys the enthusiastic backing of the British state. Andrew Smith of Campaign Against Arms Trade told The Canary:

Events like DSEI could not happen without the fundamental support of government. UK civil servants will be on hand to greet the array of human rights abusing regimes and dictatorships in attendance. Meanwhile government ministers will use it as an opportunity to sing the praises of arms dealers and do everything they can to sell even more weapons.

It’s not just DSEI that must be stopped, it’s the policies and mindset that allow these arms sales in the first place.

Councillor Daniel Blaney of the London Borough of Newham (where the arms fair takes place) tabled a motion in June, criticising the arms fair:

The London Borough of Newham is dismayed at the hosting of the world’s largest arms fair [and] rejects the economic arguments cynically deployed in defence of this trade, and resolves to work for a local and wider economy that promotes peace and sustainability.

The motion went on to say that the council should offer:

reasonable use of council owned buildings to those organising peaceful and lawful opposition to DSEI 2019.

The motion was agreed. Newham Council confirmed to The Canary that council buildings were used for an anti-arms fair event on Tuesday 10 September.

Mayor of Newham Rokhsana Fiaz sent the following statement to The Canary:

It is abhorrent that such an event should happen in Newham and it is important than we make clear our opposition to DSEI going ahead in our borough.

Newham is a very diverse borough and many of our communities have links across the globe to those areas that have been affected by conflict, displacement and the horror of war.

This council is taking a stand and, in line with the motion approved at Full Council, is doing everything we can to prevent DSEI coming to Newham ever again.

The people of Newham have been organising to oppose DSEI since it moved to the borough in 2001. Public opposition to the fair now runs very deep. The British state is imposing this immoral event on the people of Newham against their will. This is a clear illustration of the absence of democracy in the UK.

London mayor Sadiq Khan also came out in opposition to the fair:

London is a global city, which is home to individuals who have fled conflict and suffered as a consequence of arms and weapons like those exhibited at DSEI.

I will take any opportunity available to prevent this event from taking place at the Royal Docks in future years.

But even the opposition of the mayor and council of Newham, the mayor of London, and thousands of ordinary people has not been enough to stop the fair.

If we want power, we have to take it back

If we want power over what is happening in our lives and in the world around us, then we need to create a society that is truly democratic – a society where the state cannot force the people of London to stand by as arms dealers peddle suffering and misery on their doorstep.

We need to reject the façade of democracy represented by Westminster and create our own democracy from the bottom up. We have the power to do this – we just need to seize it.

Featured Image via The Canary