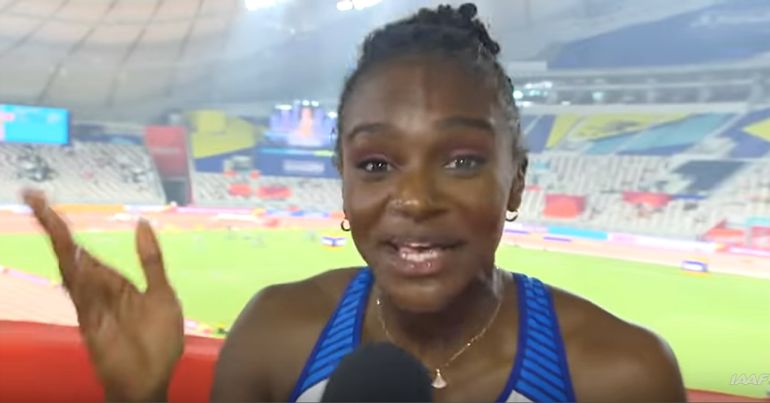 On 2 October, Dina Asher-Smith won the 200m gold at the World Athletics Championships. It was Team GB’s first ever women’s world sprint title. When Linford Christie won GB’s only men’s sprint gold in 1993, Asher-Smith was yet to be born. At the London 2012 Olympics, she was a 16-year-old volunteer, carrying kit boxes for the stars.

Asher-Smith didn’t just win her final. She crushed it. Cruising across the line in a new British record time, she was yards clear of the field. It was a performance of confidence, control and consummate ability. Yet it was a moment in the aftermath of her similarly dominant semi-final win that gave a real insight into Asher-Smith’s character.

“A champion, on and off the field.”

Asher-Smith eased through her semi-final on 1 October, qualifying fastest for the final. But after smiling and waving to the camera, she turned and noticed Anthonique Strachan of the Bahamas stricken on the track. Strachan was clutching her leg, having apparently pulled a hamstring with about 30m to go. Unable to get to her feet, she was in obvious pain. Asher-Smith hurried over and spoke to her rival before beckoning an official to summon medical assistance. She stayed with Strachan until a wheelchair appeared and then helped her into it. Sprint hurdles legend Colin Jackson, summarising for the BBC, noted Asher-Smith’s care for her fellow athlete and said: “A champion… on and off the field.”

All the best sport has the ability to tug on the heartstrings. There are the anguished near-misses, such as Asher-Smith’s team mate Adam Gemili’s fourth place in the men’s 200m. There are the times when human endurance reaches its ragged edge, as in the extraordinary story of Swiss marathon runner Gabriela Andersen-Schiess at the 1984 Olympics. And then there are the occasions when the rules just go out of the window and pure compassion takes over: triathlete Alistair Brownlee helping his exhausted brother Jonny; Derek Redmond’s dad helping his son complete an Olympic final with a snapped hamstring. Some sporting moments take on far wider significance, such as the famous podium protest at the 1968 Olympics.

The face of Team GB

Mr Speaker, yesterday marked the start of Black History Month, so I will begin by paying tribute to a young woman already making history this month: Dina Asher-Smith.

She went on to congratulate Asher-Smith on her 100m silver and wish her well in the 200m final. Asher-Smith’s subsequent win means that her already high profile within British athletics will both go global and go beyond athletics. She’s an athlete first and foremost. There’s no particular reason she should have to be anything other than a great runner. But she so clearly is more. Brilliant at her chosen profession, successful academically, and now shown to be kind and caring, she stands in such stark contrast to many of our country’s supposed figureheads.

So let’s celebrate Dina Asher-Smith, for what she’s done and who she is.