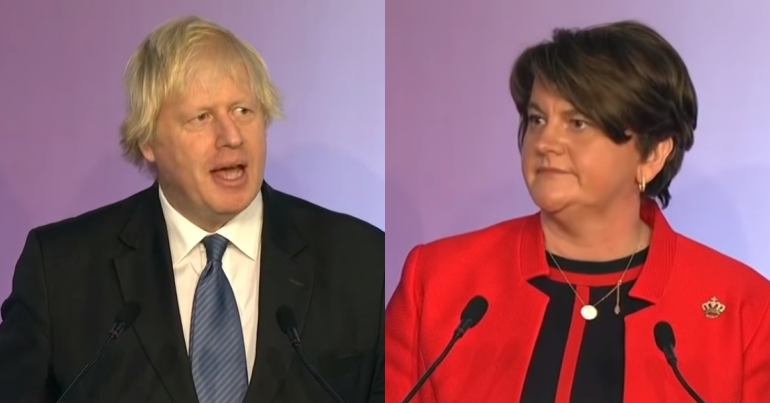 Reports of a change in “mood music” and talk of a “pathway” to a deal may indicate some progress has been made between EU and UK Brexit negotiators. This would indeed be welcome news and may allay people’s fears surrounding the potential damage a no-deal Brexit could cause. This damage would also be felt by both economies on the island of Ireland.

But this change in “mood” could also be an indication that the DUP’s days of influence at the heart of the UK government are numbered. And while there’s still some way to go, the end of those days would also be welcome news for many in Ireland and the UK.

The signs of the DUP’s demise have been there for some time. And on 10 October, secretary of state for Northern Ireland Julian Smith appeared on BBC‘s The View to give further hope it could happen. Smith said one community in the north of Ireland would not be allowed to have a veto on the UK’s Brexit plans. This comment was in direct reference to Johnson’s Brexit proposals submitted to the EU in the previous week. These proposals would effectively give the DUP that veto.

This would have allowed the DUP to dictate whether the north of Ireland followed EU or UK trading rules. This means the opinion of Sinn Féin and other parties in the north would effectively have been sidelined.

Instead, Smith said a simple majority could decide whether or not the north stayed within the EU single market. Initially, there was speculation that Smith hadn’t been briefed on this by No 10 before going on air. Nonetheless, it was a significant statement for a secretary of state to make and demonstrated a shift from Johnson’s initial position. Because if the veto is removed and a border is put down the Irish Sea, the DUP can no longer support the Tories. If it did, it’d represent a massive contradiction of its “blood red” line position.

And according to RTE‘s Europe editor’s report the next day, it appeared as if Smith hadn’t been acting alone:

3/ On consent, I understand Mr Barnier said the UK is signalling a willingness to accept a simple majority endorsement in NI, rather than a veto for one party. Whether this is via a Stormont Assembly vote or even a referendum on exiting the new arrangements is not clear

This was followed by further confirmation on Saturday 12 October. Although at this stage it’s not yet clear whether this simple majority would be secured in Stormont (the north of Ireland’s parliament) or in a referendum in the north.

Criticism of DUP within unionism

The DUP supported Johnson’s recent Brexit submission to the EU. And its support led to criticism from hard-line unionist quarters. So this statement from Smith, along with the above reports, has generated further criticism from the unionist hard-line.

Jim Allister of Traditional Unionist Voice (TUV) said any proposals that would lead to a border down the Irish Sea would represent:

a fundamental assault upon our position within the United Kingdom

The DUP claims its position hasn’t changed and that “the United Kingdom must leave the EU as one nation”. Arlene Foster stated the DUP couldn’t support any deal that would keep the north within EU structures. Ian Paisley Jnr said that if Johnson wants the 10 DUP votes in the Commons, “he’s got to earn them”. But as Johnson leads a minority government, the DUP should rethink how valuable those votes actually are.

Johnson has lost a number of crucial votes in the House of Commons, even with DUP support. So its support hasn’t been of any real assistance to Johnson. This is something that could well force Johnson to rethink.

The news we’ve all been waiting for

Should the Tories finally ditch the DUP, its departure will be welcome news. Firstly, it’ll be welcome for Irish republicans, who have opposed the DUP propping up a “pro-Brexit and pro-austerity” Tory government. It’ll also be welcome for those who oppose the DUP’s hard-right policies. And it’s good news for the UK, as the DUP is ultimately a one-trick pony that represents little or no interests but its own.

When that dark chapter in UK political history is finally put to bed, it’ll be time to do the same to the Tories.