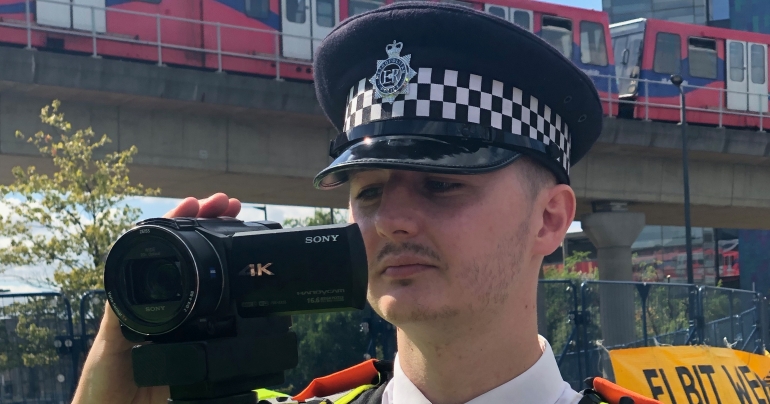 Ten years ago, I was one of a group of people that set up the Network for Police Monitoring (Netpol). I was part of the anti-police-surveillance group Fitwatch, and we worked alongside a number of brilliant organisations in an informal way. But we all did our own things; and speaking to each other, we realised the collective power we’d have coming together to form an umbrella organisation.

So Netpol was born to monitor, critique and challenge policing on protests and in our communities. Ten years later, and it has achieved a huge amount. But this work comes at a cost, and Netpol need to raise £10k to keep going. If you value that work and the freedom to protest, there’s one small way you can help: donate to keep that work going – or, if you can’t afford to donate, keep sharing the link.

Make no mistake, political policing exists in this country – whether it’s routine photography and intelligence gathering on those who attend protests, undercover cops infiltrating movements, or police attempting to use draconian legislation to stop protests.

But lists sound dry. And as Netpol states, “the consequences, however, are often significant”; and:

It can lead campaigners to think twice about whether to exercise their rights when faced with aggressive tactics or unwarranted attention by the police, simply taking part in a legitimate protest.

I know firsthand the reality of political policing. And it’s why I was involved in setting up both Fitwatch and Netpol.

My experiences with political policing led to two breakdowns. Excessive police harassment, violence, and being targeted as an organiser took its toll. It resulted in regular arbitrary arrests on bullshit charges that went nowhere, just because the cops didn’t like what I was doing. And it resulted in me being targeted by spycops, with intrusion into all areas of my life.

When we started Fitwatch in 2007, cops with cameras were outside every meeting. Me and friends were also followed during and after most protests we attended. And I was told by people that they didn’t want to be as involved in politics as I was as they wouldn’t be able to handle the level of police harassment I received; several people said they wouldn’t go to protests in London any more because of the policing.

Many of us ignored this type of policing for too long because it took our focus off the issues we were trying to address. But it got to the stage where it couldn’t be ignored. It was affecting our ability to mobilise and express dissent. And it was affecting our mental health too.

‘Forward intelligence policing’ (where the ‘FIT’ in Fitwatch came from) was designed to harass, disrupt and deter protesters. Any policing strategy that has this at its core is fundamentally about targeting people’s mental health. We could see the impact this was having, and we took action to stop it.

Together we are stronger

Fitwatch had an amazing amount of success – both in directly fighting back but also in changing police tactics. Evidence secured during Fitwatch trials for deliberately obstructing police cameras laid much of the groundwork for what we know today about police databases. And ultimately, Fitwatch actions mean you can now attend meetings without four or five cops standing outside with a massive camera.

But we were just one campaign. The strength of Netpol is that it brings together grassroots organisations so we can both unite our struggles and develop effective campaigning strategies. These are just some of the areas where Netpol is working:

Protect the freedom to protest

The right to protest is not something any of us should take for granted. Even if you’ve never been moved to protest in your life, defending the right of everyone to express dissent should be at the core of every true democracy.

Unlike some other civil liberties groups, Netpol comes from the grassroots and works with the grassroots. Importantly, it doesn’t discriminate between ‘good’ and ‘bad’ protesters – a game which only benefits the divide-and-rule tactics of the state. And equally as important, it doesn’t ever work with the police.

This puts Netpol in a unique position. And it’s why, although I haven’t been part of the steering group for many years now, it still has my full support. Ten years on, it’s going strong, and still doing vital work. And between all of us, we can ensure that work continues.