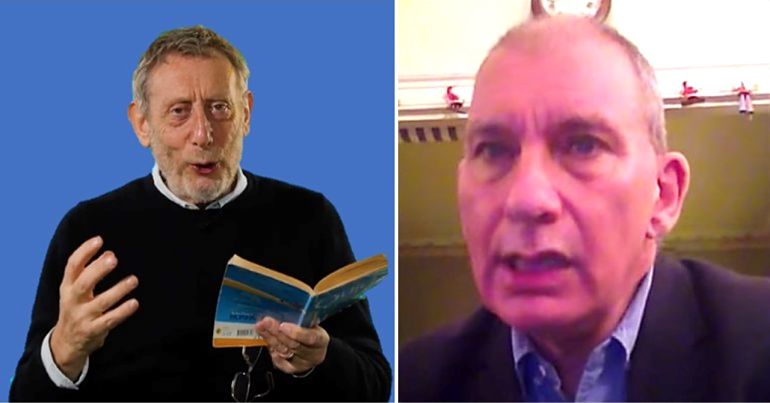 The antisemitism witch hunt’s latest target is renowned author and poet Michael Rosen. Rancid hate-goblin and Spectator columnist Nick Cohen is leading the charge. But there are a couple of problems with this. First, Rosen is himself Jewish, and progressive. Second, Cohen regularly contributes to a publication whose editors hang out with literal fascists.

This attack is an outrage, and sheds light on how cynical and detached from reality this witch hunt really is.

It’s been clear for several years now that the witch hunt is a systematic effort to shut down left-wing criticism of Israel by conflating it with antisemitism. The American Right and Donald Trump are deploying the same strategy against the US left.

Rep Tlaib wants to cut off aid to Israel. This is the new face the of Democrat Party? Read the AOC PLUS 3 statements on their hatred of Jews and Israel. Check out Rep. Omar (the great people of Minnesota won’t stand for this).

The search for antisemitism in the Labour party is the weapons of mass destruction of our age. I think there is the same absolute lack of evidence. There is the same substitution for emotion rather than rational debate. And in many cases it’s the same… people doing it. …

We are through the looking glass when antiracists are condemned by racists as being racists.

In reality, antisemitism is lower among Labour supporters than most other parties.

One antisemite is an antisemite too many. But facts are important. Especially when Labour’s opposition is the most racist government in a lifetime, and this sickening campaign is enabling it to continue.

Cohen is another of the witch hunt’s self-appointed moral guardians. In reality, he simply despises Corbyn and the left. But rather than oppose them honestly, with a compelling counter-argument, he’s joined the witch hunt. And his latest target is former Children’s Laureate Rosen.

Recently, the Chief Rabbi publicly urged non-Jews not to vote Labour on behalf of Jews. The intervention infuriated anti-racists, given the ongoing and disgraceful racism of Corbyn’s opponent Boris Johnson. Especially given that the Chief Rabbi considers Johnson “a longstanding friend”. 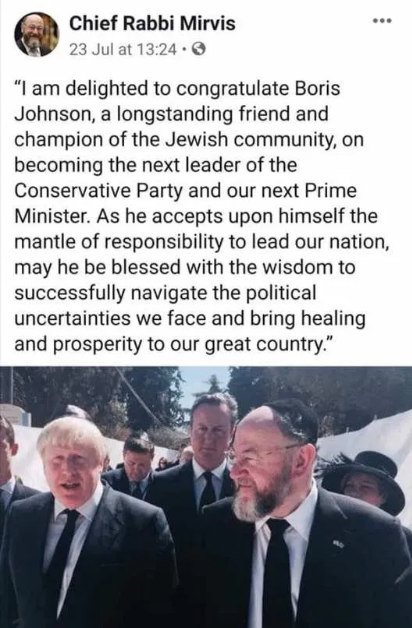 Neither of these statements is true or anything like true.

There has been significant and sustained opposition to the witch hunt by Jewish people. Prominent Jews have demanded the witch hunt cease ‘weaponising antisemitism’ against the left. But those who come forward then face being denounced as antisemites themselves. They’re even having their Jewish identity erased. Rosen describes his own experience of being a Jewish person against the witch hunt:

To say these things has invited Jews and non-Jews on twitter to call me a ‘kapo’ (a Jewish concentration camp guard), a ‘used Jew’ (that from the editor of ‘Jewish News’), someone who ‘dons the cloak of Jewishness’ (a Jewish DJ and actor), one of the ‘useful Jewish idiots’ (from the commentator Dan Hodges), ‘a cheerleader for Soros’ (from Lee Harpin political editor of the Jewish Chronicle), and a plea to the BBC to not employ me to present ‘Word of Mouth’ (from the QC Simon Myerson and the campaigner against antisemitism (!) Euan Philips).

Clearly some people think that the best way to combat antisemitism is to be antisemitic.

When Mirror associate editor Kevin Maguire shared Rosen’s blog, Cohen accused him of being ‘corrupted by Corbynism’ and whitewashing racism. And another pile-on began.

I have known and admired @Kevin_Maguire for decades. Corbynism has corrupted him and many other good men and women by compelling them to whitewash racismhttps://t.co/W3Xbopei9A

Cohen has no place to be talking about anyone whitewashing racism. His punditry comes off as the ramblings of an Islamophobic, neocon chickenhawk.

He’s one of those Centrist Dads still harping on about the righteousness of the invasion of Iraq that left over half a million people dead and sent the Middle East into chaos. And he’s not a fan of celebrating the history of LGBTQI+ people, once writing:

It’s Lesbian, Gay, Bisexual and Transgender History Month. Who on earth is that meant to help?

But his comfort zone is casual Islamophobia, and he’s indulged in the odd anti-Muslim conspiracy theory. Just last year, he wrote:

Just as Viktor Orbán can target Muslim refugees as there are hardly any Muslims in Hungary, so Labour faces few electoral costs from baiting Britain’s tiny Jewish minority.

Labour now needs the Muslim vote, and antisemitic prejudice is higher among Muslims than the general population. Although it is false to say all Muslims are antisemites, it is true to point out that antisemitism is endemic among the political Islamists who back Corbyn.

This is exactly the language of Nazi Germany’s “great betrayal” conspiracy theory about Jews. The whole argument is intended to leave you uncertain about ‘these people’ as a whole. The #NotAllMuslims qualifier is feigned objectivity in what is simply hate speech.

Funny that he should bring up the far-right government of Viktor Orbán in Hungary too.

Cohen writes regularly for The Spectator, which platforms the racist writings of Rod Liddle and Douglas Murray. The Spectator’s editorial team has also collaborated with a foundation funded by the far-right, antisemitic government of – you guessed it – Hungary.

This is hate speech. Mocking Rosie Duffield for having the courage to speak out about domestic abuse and calling for ways to stop British Muslims voting.

Rod Liddle is beyond the pale, but @FraserNelson how can you justify giving his bile a platform on the @spectator? pic.twitter.com/LEGW14iYKi

I think BBC producers should have a read of Douglas Murray's 'What are we to do about Islam?' Pim Fortuyn Memorial speech before they next invite him onto their shows. h/t @mehdirhasan https://t.co/MlsorXQQSS pic.twitter.com/QcNcVduUud

To be clear. Andrew Neil and The Spectator have worked with a foundation funded by Hungary's Fidesz government, and which is staffed full of former Fidesz officials

In Cohen’s world, sharing a Jewish person’s opinion about who is qualified to speak on their behalf is racist. But sharing a platform with the likes of Liddle, Murray and Orban isn’t. And neither is sharing anti-Muslim conspiracy theories, apparently.

Nick Cohen is a bigot, and a hypocrite. He is everything Alexei Sayle warned us about; a racist demonising anti-racists as racists.

He’d do best to pack in writing altogether, and opt for a change of career. Perhaps something in colorectal dysfunction. At least then he might have some use for shoving his head quite so far up his own arse.