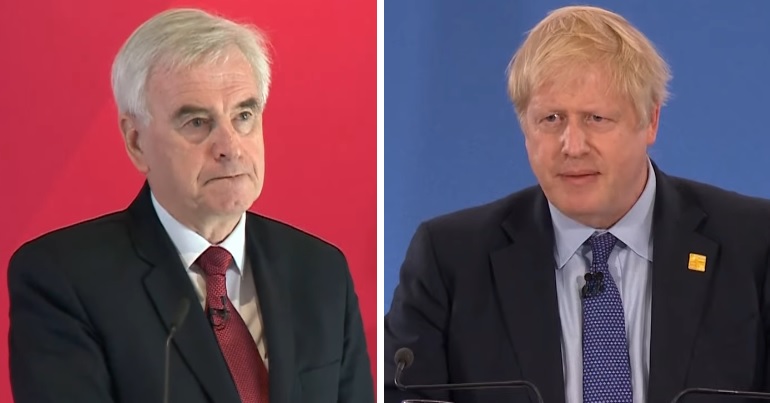 The difference between how Labour and the Conservatives tackle the bullying US president became very apparent on 4 December. Both Boris Johnson and John McDonnell found themselves having to respond to a situation concerning Donald Trump. Johnson chose to lie down. McDonnell chose to stand up.

In essence, it took one sentence from the shadow chancellor – alongside one pathetic attempt at damage control from Johnson – to unmask the latter as a coward.

A video of Johnson and other world leaders appearing to laugh at Trump at a NATO event circulated on 4 December. In the video, Johnson can be seen smiling and laughing along with the others during the conversation.

After the video went viral, however, a Downing Street source made the following grovelling comments:

The Prime Minister was hosting and engaging with world leaders. It is others that were having the conversations and Boris certainly was not leading, as can be seen from the clip.

You did not see any commentary from him except for an innocent question as to why one was late.

Contrast that with McDonnell’s answer to a question after a speech on the same day. Sky News asked him:

Is the president of the United States lying when he says that the NHS isn’t on the table in trade talks?

McDonnell responded, explaining why Trump’s recent claim that the US wants “nothing to do” with the NHS should be taken with a pinch of salt:

Donald Trump has a passing relationship with reality and truth sometimes.

In short, McDonnell didn’t bootlick, like Johnson, in a situation that could offend Trump. Instead, he called the president out.

The shadow chancellor also said: “all the evidence that we’ve seen has demonstrated objectively that [the NHS] is [on the table]”. He’s referring to the 400+ page dossier that Labour recently revealed. The documents detail discussions held between UK and US authorities on a post-Brexit trade deal. They show that the US wants “total market access” in the deal – meaning access to everything – and unless something is explicitly off the table, known as “negative listing”, it’s on the table.

The documents do not show that the NHS is off the table, so, by default, it’s currently on the table. Johnson has said that he would walk away from trade talks if Trump insists on the NHS being involved. But the Conservatives have had two years to rule the NHS out categorically since the talks began and yet haven’t. In fact, Johnson and nearly all other Conservative MPs voted on 23 October to ensure the NHS was included in any future trade deal, after Labour put forward a motion to protect it.

So don’t let the Tory-cheerleaders parading as journalists in Britain distract you by running stories linking the dossier to Russia. That story is based on a report by Graphika’s Ben Nimmo, who argues that “initial efforts” to “amplify” the trade deal documents online “resemble” Russian tactics seen previously. But the author himself says he doesn’t have the data to prove anything for sure, and no-one has claimed the documents aren’t real.

Plus, Nimmo is an ex-NATO press officer who worked for the Institute for Statecraft in 2015/16. The Institute became notorious after its Integrity Initiative was exposed spreading smears about Jeremy Corbyn in 2018. The UK Foreign Office funded the Integrity Initiative to the tune of £1.96m in 2018/19. Nimmo is a senior fellow at the Atlantic Council, which journalist Max Blumenthal describes as:

Who would you rather?

Given how vindictive Trump has shown himself to be, anyone who criticises him knows there may be consequences. But Labour is obviously willing to face them in order to point out the bloody obvious and protect the NHS.

In contrast, Johnson effectively ran about screaming “It wasn’t me! It wasn’t me!” when caught in a situation that might scupper Trump’s fondness for him. Although, like the US president, Johnson also has a tendency for fibs. So whether Trump can believe him is a whole other matter.

The most important question, however, is who would you trust more to stand up for Britain’s interests? I’d wager it’s those who aren’t tiptoeing around the president but are telling it like it is.