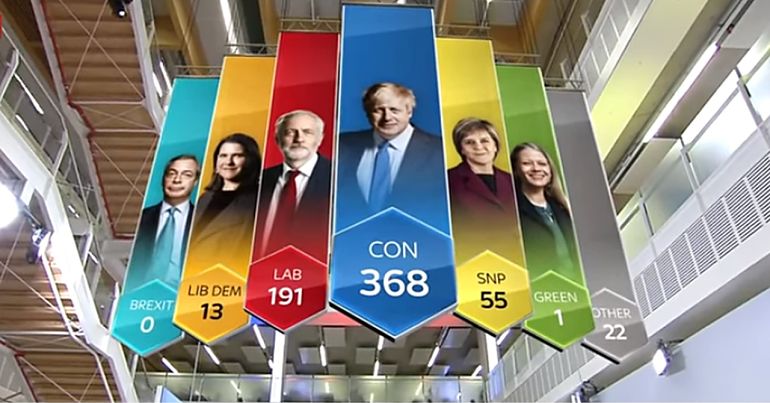 When I got home from the count, my Labour placard had blown down and was lying in the flowerbed. In rural Norfolk, my constituency was always likely to return a Tory MP. But I supported the Labour candidate anyway because the Labour manifesto made the most sense. Now, everything I thought I knew seems as secure as a placard in a high wind.

It makes absolute sense to me that after being ravaged by austerity for a decade, the UK is in desperate need of investment. Our run-down public services need rebalancing. And that’s what the Labour manifesto promised. It wasn’t the moon on a stick. It wasn’t some kind of crazy free-stuff-for-all Christmas list. It was a rebalancing. A recognition that dedicating a sensible proportion of the nation’s resources to things like the NHS, social care, public transport, and genuine social security is the best way to create a country that works.

At the moment, the country doesn’t work very well. We’ve created a National Lottery culture in which it can very easily seem that the only way to be financially secure is to be a millionaire. Simply working an honest job is often not enough. Our expectations have shifted so drastically that people are supposed to feel pathetically grateful if they get awarded a benefit or if they can make it through old age without losing their house. That’s ridiculous in such a wealthy country. And Labour had plans which would have reversed this headlong regression to the Victorian era.

At least that’s how it seemed to me. But what do I know? If everyone had felt the same, the results would have been very different. Across rural Norfolk (and in other parts of England), Conservative candidates took over 50% of the vote. Spirited Labour campaigns yielded distant second places. Huge numbers of people went to their polling stations and put their cross in the Conservative box.

Some people will have considered voting Tory a ‘common sense’ decision, just as it was for me to vote Labour. Whether through habit, learned behaviour or personal research, those folks will have a vision of Britain which is cast in dark blue. The sanctity of the polling booth may never reveal how many voted on a negative rather than a positive basis. Without question there was a major campaign to create fear around the idea of a Corbyn premiership. As laughable as it is to any of us who’ve seen him at close quarters, very many people are afraid of the peaceable old grandfather. They genuinely worried in some sense for the safety of the UK if Corbyn became PM.

The United Kingdom is unlikely to endure. Scotland is clearly on a different track to England. Westminster’s hold over Scotland, which always seemed slightly absurd, now seems obscene. The concept of part of Ireland being in the UK will struggle to overcome the complexities of Brexit. The relationship between Wales and England will continue to defy easy description.

England, strangely, looks more unified than it has done for a while. But the bluer than blue map hides a multitude of local dramas. Big-name MPs of all colours have been toppled. The idea, once put about by Chuka Umunna, that voters choose the person not the party has been comprehensively destroyed. The new house of commons is going to be full of people who are there for no other reason than their dark blue rosette. Labour and the Liberal Democrats especially, but also to some extent the Tories, will face a period of rearrangement and repositioning.

I have more questions than answers. The questions began with “Surely not?!?” at about 10.01pm last night. So far, the only answer is “Yes, really”. But I won’t be racing to tie down the answers. One thing that I think is pretty clear is that I hadn’t previously asked enough questions. In fact, I don’t think I even knew what the right questions to ask were. I still don’t. But that’s my challenge. At the moment, I really don’t understand what’s happened. More than hurt, my overwhelming sense is of confusion.

There will be many things to discuss over the forthcoming days and weeks. But I’m wary of it becoming a political discussion. This election felt like a rejection of politics and political solutions. To me, the Labour manifesto made perfect sense politically. The country voted against it. So my priority will be to speak to folks I know who aren’t political, who don’t dissect manifestos for fun; people for whom elections are neither a parlour game nor a matter of life and death but something they just do if asked. And I may get answers or I may not. But I suspect I might be a little closer to asking the right questions.