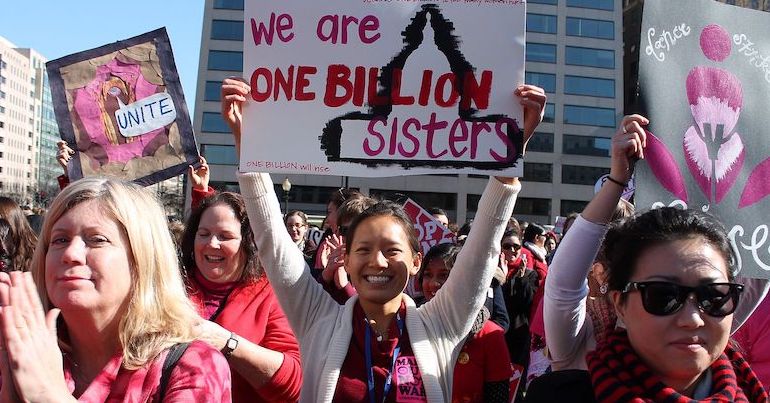 On 14 February, women around the world are taking a powerful stand against violence. One Billion Rising is “the biggest mass action to end violence against women (cisgender, transgender, and those who hold fluid identities that are subject to gender-based violence) in human history”. So on Valentine’s Day, people rose up to dance for revolution.

One Billion Rising (OBR) started in 2012. We can’t ignore the statistics behind this movement, because it started:

as a call to action based on the staggering statistic that 1 in 3 women on the planet will be beaten or raped during her lifetime. With the world population at 7 billion, this adds up to more than ONE BILLION WOMEN AND GIRLS.

Every February since then, actions have taken place:

in countries across the world – to show our local communities and the world what one billion looks like and shine a light on the rampant impunity and injustice that survivors most often face. We rise through dance to express joy and community and celebrate the fact that we have not been defeated by this violence. We rise to show we are determined to create a new kind of consciousness – one where violence will be resisted until it is unthinkable.

Resist violence “until it is unthinkable”

The 2020 action is vital. The theme is solidarity and revolution, because as OBR explained:

We are in the midst of a rising tide of right-wing nationalism, white supremacy, fascism, tyranny, hatred of and fear of immigrants, misogyny, femicide, homophobia, transphobia, corporate greed and climate destruction.

But what’s crucial is a powerful awareness that we can’t “beat fascists, rapists, climate deniers and plunderers on their terms”. The crucial distinction is that we’ll “never be that cruel, discompassionate, greedy, or murderous”. As OBR states:

We cannot let ourselves be changed by or sunk in their cynicism, hatred, divisions and destruction.

“What we can do”, meanwhile, is to “remember we are the many”. This means raising “the vibration through action, art, connection, imagination and love”. Since 2012, activists have gathered in solidarity to dance together. As simple as this may sound, it’s actually an incredibly powerful action.

One woman from Afghanistan – who needed to remain anonymous – explained the significance of OBR “as an anti-war movement fighting for women’s rights and democracy with altruistic intentions” because it:

has always stood against injustice, oppression, double-standards of governments, ignorance, colonialism, capitalism, and has sought to show its true and meaningful solidarity with people in every corner of the world. We witness this solidarity in Afghanistan by educating future doctors, engineers, lawyers… and helping young generation of girls to build their future, Your solidarity has taught girls to swim when their only option is to sink, this is indeed valuable. We are very proud to be associated with it.

In 2016, meanwhile, activist Yanar Mohammed stressed the importance of the movement in Iraq:

It was in this sisterhood that we were able to stand all these years against all odds which resulted from the heinous and inhumane invasion of Iraq and criminal manipulation of its political scene.

Activists have organised events around the world for 2020.

As time zones shifted on Valentine’s Day, women danced in the Philippines:

With this year's slogan RAISE THE VIBRATION
RISE FOR REVOLUTION, we celebrated OBR 2020.#OBR2020 pic.twitter.com/7T5jA7OSeD

Kurdish women are also taking a powerful stand against violence:

Women will stand up against violence on 14 February

One billion women worldwide have been raped or harassed. Women refuse to assume passively this violence. The One Billion Rising campaign called on women to get on their feet and protest on February 14.https://t.co/gFJhjpWsky

Actions took place around Europe too:

As well as highlighting the global situation for women, especially in areas of conflict, OBR also plays a powerful role in local communities. Women in Cornwall, for example, explained the significance of the movement:

Joe Buncle spoke to activists rehearsing a dance ahead of tonights One Billion Rising demonstration in Truro. Protestors will perform outside of Truro Catherdral at 6pm pic.twitter.com/FiqSGIMRZW

Kyla Goodey, Kerpow (Kernow Power of Women) co-founder and one of the organisers of the Cornwall action, told The Canary that Kerpow is “a newly formed company”. It works to explore “how to use art, connection and conversation to raise consciousness around women in Cornwall”. As she also explained:

We became aware of this global movement via the amazing work of Eve Ensler, author of the Vagina Monologues and Vday. We also discovered the inspiring work of The Women’s Centre Cornwall. Maggie Parks, its chief executive, spoke at a Kerpow event last year. She gave us an insight into the devastating issues experienced by women in Cornwall.

Since then, members of Kerpow felt it was important to engage and support this important global movement.

Kerpow is very proud that our local community are gathering to unite with the rest of the world in this mass action to end violence towards women and girls.

Although a storm is incoming, as Goodey stressed: “Storm Dennis will not stop us, we will rise!”

As a rape and domestic violence survivor, I’ll also be dancing with OBR today. The scars of abuse are still healing. But knowing that my feet move in solidarity with my sisters around the world is one of the most powerful acts of resistance I can possibly take.