Ash Sarkar was right about immigration on BBCQT, but there's so much more that needs to be said - The Canary 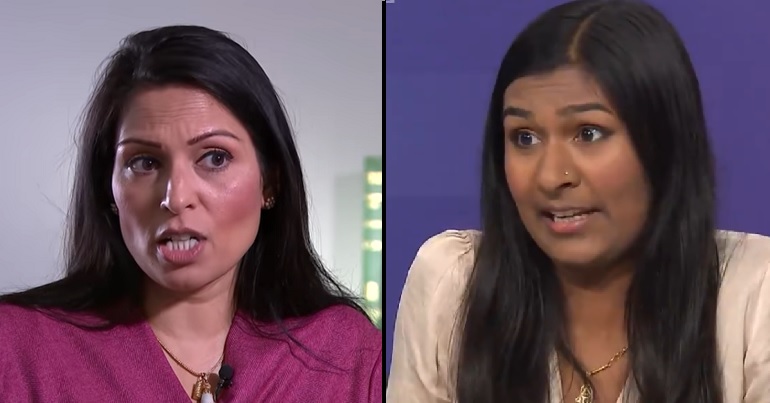 Home secretary Priti Patel has announced new, stricter rules on immigration. Under these rules, those termed “low-skilled” workers will not be able to migrate to the UK.

Following the news, a debate on BBC Question Time saw arguably one of the most openly racist, anti-immigrant rants aired on the show. In response, panellist Ash Sarkar tried to make the economic as well as human case for immigration. While Sarkar’s points on both counts are valid, the human case for immigration goes much deeper than a few minutes on Question Time will allow. Below are some reasons for why stricter immigration is a fundamentally inhumane position.

It’s no coincidence that people who hold passports from wealthier Western countries are able to travel freely. And those from developing countries face the most draconian restrictions. This is a deliberate effort to restrict the movement of poor people only. Passports and visas cost money, so those who can afford them can still move freely. While those too poor to afford these, who are usually also labelled as ‘unskilled’ labour, are left behind.

Many people in this country don’t realise how strict immigration controls already are. Moreover, they don’t realise that a classist system is keeping them in place. In 2017, Theresa May increased the income threshold for people wanting to apply for spouse visas. This has placed an unfair burden on the many people who found partners from other countries, but don’t earn enough to be able to live together in the UK. Moreover, asylum applications are so selective that thousands of poor, displaced people are turned away every year. And if you want to apply as a migrant for any other reason, the system is rigged against you.

The rules are bureaucratic and require a strong command of English. The immigration lawyers who can help you navigate them cost money. Every application from a spouse visa to Indefinite Leave to Remain to British citizenship costs money. The ridiculously hard Life in the UK test, a requirement for citizenship, costs £50 for every attempt. At every stage, the government taxes and penalises first-generation immigrants for wanting to live in the UK. And submitting applications doesn’t guarantee their success. In fact, at one point people from Pakistan were most likely to be refused visas. Those who are fortunate enough to be able to afford every step of the process, and have the Home Office approve their application, get to stay. Those too poor to apply through the formal routes, or who have their application denied, face immigration bail, detention or deportation.

There’s no doubt that Britain’s immigration policy is racist. Nothing represents this better than the Tories’ Hostile Environment. The many thousands of refugees whose asylum claims the Home Office has refused are also People of Colour. They’re denied a home in the UK despite the UK’s role in the conflict that displaced them to begin with, e.g. in Syria or Yemen. Whenever people complain about ‘immigration’, it’s almost always code for ‘too many people who aren’t white’. And the criminalisation of Jamaican immigrants in the ongoing Windrush scandal is nothing if not racist.

The Home Office deported 17 people to Jamaica on 11 February despite concerns that detainees didn’t have enough legal advice. The government’s excuse for these deportations was that these people have committed criminal offences. It doesn’t seem to matter that they served time for their offences; the Home Office decided to deport them anyway. What’s interesting is the targeting of Jamaicans in this instance. Are no other immigrants guilty of criminal offences? Of course they are, but they’re still allowed to carry on living in the UK.

If there are no planes of deportees heading off to Australia, Canada, or New Zealand, we must assume that people from those countries never commit crimes or offences. Unless there’s another reason…???

The problems with immigration controls don’t end there. What we tend to overlook is that immigration enforcement is necessarily a violent process. At least 11 wrongfully deported Windrush victims have died. Human rights abuses at the UK’s Yarl’s Wood detention centre are well-documented. The United States’s detention of mostly Central American refugees, including children and babies, at its border wall is abhorrent. Six children have died in US immigration custody since September 2018. Australian immigration has similarly committed human rights violations against refugees in detention.

So much of the language of immigration debates revolves around the dehumanisation of People of Colour. Especially those who are poor, displaced, or both. And when People of Colour are dehumanised, justifying violence against them becomes easy. Building on that, labelling people ‘illegal’ becomes an excuse to justify state violence in the guise of immigration enforcement.

The reality is that the so-called ‘crisis’ around immigration isn’t a crisis at all. People who blame immigrants for a purported strain on public services are looking in the wrong direction. While public services for e.g. health, education and housing have been stretched, the clear reason for this is Tory austerity. Cuts to vital services across the country have left the NHS severely understaffed, hospitals under-equipped, schools underfunded and more and more people homeless. But the government did manage to spend almost £50bn on defence in 2019 alone. So it’s not that we can’t afford to strengthen these services and repair the damage from cuts. Rather, it’s that the government chooses not to.

Meanwhile, tax loopholes have caused hundreds of billions to be lost in taxes. The figure for 2014 alone was estimated at an astonishing £122bn. Closing these tax loopholes, as Corbyn had pledged to do, could easily cover the cost, and improve the provision, of public services. Yet the Conservatives refuse to do so, because they continue to serve the interests of the top 1%.

Will those on the political right ever accept that they’ve got it all wrong on immigration? Probably not. But in the meantime, those on the left would do well to remember that there are many reasons to oppose stricter immigration rules. The economy is only one of them.