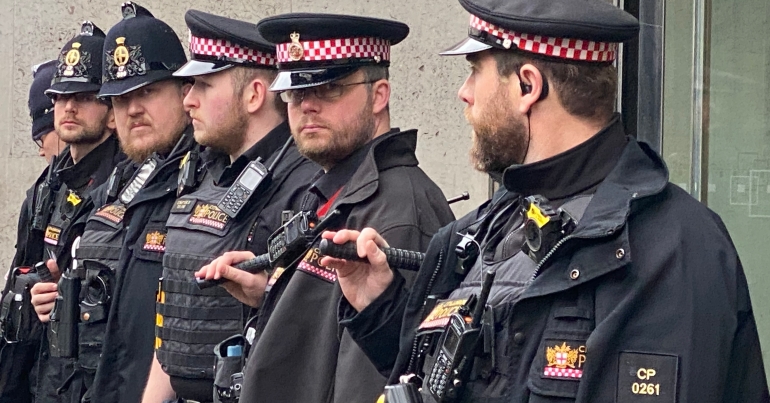 The Network for Police Monitoring (Netpol) has issued a warning about the police powers contained in the coronavirus bill that parliament is currently debating. It is calling for “restrictions to police powers and a strict time-limit on ‘draconian’ Coronavirus Bill”. And it’s a warning we all need to hear.

The following is reproduced, with permission, from Netpol.

Police powers are invariably used in a disproportionate manner

While everyone is currently very anxious about the future, it is important that any emergency response the government plans to adopt and implement to contain the coronavirus (Covid-19) outbreak is fair and proportionate.

The difficulty is that during every emergency, police powers are invariably used in a disproportionate manner.

There are obvious examples from our work: the use of counter-terrorism to justify the classification of entirely legitimate campaigners as “extremists”, or the recent, unlawful attempt to ban climate protests in London. That is why giving the police tough new powers is always fraught with risk.

In the current crisis, we can look straight away to examples in Italy, where the police have detained and assaulted people out jogging, an activity that is permitted under the country’s lockdown arrangements. In Germany, the police have taken advantage of the coronavirus to use overwhelming force to clear a reception centre for refugees. In France, people have been violently detained for not having the correct documentation. The idea that none of these actions could ever happen in Britain is simply wishful thinking.

This is what is so alarming about the decision of the British government to introduce, in the Coronavirus Bill, the most severe powers we have been in over 70 years – not for the 30 days set out in existing legislation, the Civil Contingencies Act 2004, but instead for two long years.

People are already having their freedom curtailed by the necessity to self-impose restrictions on their lives to try and stay healthy. Thousands, however, are pulling together and joining activities to provide mutual aid and support to their neighbours.

These are exceptional times, but by starting from a position that imposing further coercive controls and treating us as potential criminals is necessary for the next two years, the government risks further fuelling people’s fears.

It also risks creating a situation where it quickly becomes normal for the police to have absolute authority to decide when and whether a gathering in a public place may go ahead, even after the current crisis starts to abate and in circumstances that have little to do with stopping the spread of the virus.

People are avoiding the term, but this is pretty much the definition of a police state.

The government has not even considered the human rights implications of its decision to severely limit public gatherings between now and 2022. The bill’s ‘summary of impacts’ talks solely about commercial gatherings in terms of the understandable need for compensation for venues. There is nothing about the need to protect rights to freedom of assembly as a vital mechanism for holding the government to account.

The Metropolitan Police has indicated it is unlikely to regularly use one provision in the bill, which if passed will enable:

police and immigration officers to detain a person, for a limited period, who is, or may be, infectious and to take them to a suitable place to enable screening and assessment.

Aside, therefore, from questioning why it is included if it is not a pressing requirement, this part of the legislation may have its greatest potential impact at the point when the number of Covid-19 cases has dropped substantially and the crisis is starting to seem like it is receding.

The risk to criminalised communities

As Amnesty International has said: “quarantines impact individuals’ freedom of movement and, depending on how they are implemented, can also amount to arbitrary deprivation of liberty”. As this power is not only aimed at people who are sick but those who are simply suspected of infection, it raises the question of how police and immigration officers are equipped to make what is a medical judgment? Will they rely instead on “gut instincts” and all the bias and subjectivity that involves, or on (potentially malicious) reports from others?

Even the government in its ‘summary of impacts’ has admitted that “any provisions giving broad powers of detention would be highly likely to be controversial with stakeholders who regard police and immigration officer detention as needing to be strictly limited and subject to several safeguards against abuse”.

We would hope everyone believes “safeguards against abuse” are always important.

There is an obvious risk that communities already discriminated against by the police and immigration authorities will face a new way of categorising them as a “threat” – in this case, a threat to public health. The bill also says obstructing an immigration officer or a constable in the exercise of this power would constitute a criminal offence, which leaves anyone objecting to the misuse of this sweeping power at risk of detention themselves.

Netpol supports calls made by other human rights groups for severe limits on the length of time any emergency powers are introduced. The proposal for six months is, however, far too long. The government must be forced to reassess the need for such restrictive measures on a month by month basis and demonstrate that measures are needed to protect people’s lives.

We also believe the need for additional detention powers are unproven and should be removed from the bill.

We think it says something deeply concerning about the government’s priorities that more time has been devoted to including draconian new powers in emergency legislation than into the kind of mass testing that the World Health Organisation says is immediately needed.