We’re in the middle of a pandemic. All evictions need to stop right now. - Canary 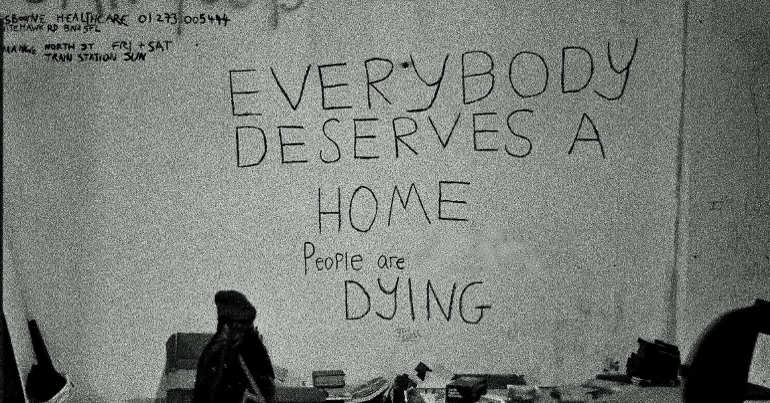 Another eviction has taken place of homeless people self-organising to keep a roof over their heads. According to squatters website Squat.net:

Yesterday (1 April) the DiY Kodak Collective… were again illegally evicted from a building. This is the second time in a week. This time it was a squatted basement flat, part of the complex which used to be the Hostelpoint at Pool Valley coach station in central Brighton.

A collective self-organising to house themselves

On 27 March, Eliza Egret wrote for The Canary:

Despite widespread calls for people to practise social distancing to help stop the spread of coronavirus (Covid-19), the police and landlords seem to view carrying out evictions as essential business. According to the DIY Kodak Collective’s account:

Three men claiming to be the owners came by at noon to threaten violence unless the squatters left by 9am on 2 April. They then came back at 7pm the same day with a sledgehammer and smashed their way in. While they did so, a passerby flagged down a police car. Instead of arresting the angry men brandishing a sledgehammer, the police entered the squat, quoting PACE 17 which is complete nonsense. The legal warning was on the door stating that anyone using force to enter was breaking the law. No-one wanted to stay and wait for more violence to come, so we decided to leave.

Members of the DIY Kodak Collective told The Canary that people had been living in the Hostelpoint building for a week, and had been self isolating.

The DIY Kodak Collective’s statement also points out that those carrying out the eviction were not practising social distancing:

none of the four police or three other men wore any masks or gloves, and they weren’t social distancing… It’s no surprise that owners act like thugs or that police don’t respect the law.

The Canary contacted Sussex Police for a comment about the above account but hadn’t received a reply at the time of writing.

“We will be back with better barricades”

Gary from the DIY Kodak Collective was, however, positive about the grassroots solidarity and mutual aid that’s flourished since the start of the Covid-19 epidemic:

There’s a lot of talk of police overreaching their powers in this new situation, but grassroots solidarity is also blossoming everywhere. We will be back with better barricades

But it’s a reflection of the callousness and cruelty of our current society that evictions like this take place at all. Homeless people are routinely thrown out onto the street to protect the interests of landlords.

And in the midst of a global health crisis, when all of us should be practising social distancing, this eviction shows an extreme disregard for life.

The people who had taken shelter in the Hostelpoint building had self-organised so they had somewhere safe to live and self-isolate amid the epidemic. The eviction puts them at greater risk. And for what? It seems unlikely that the owners of this derelict building will be able to rent it or carry out building work during the ongoing coronavirus lockdown.

The government has repeatedly called for people sleeping rough to be housed so that people can socially distance themselves. And homeless people who are still out on the streets are facing police harassment and fines.

Rough sleepers need a safe space to socially distance like the rest of us. We need to respect and support their efforts to claim that space and demand an immediate end to all evictions.