While whining about declining civility in politics, right-wing pundits have given the real culprits a free pass - Canary 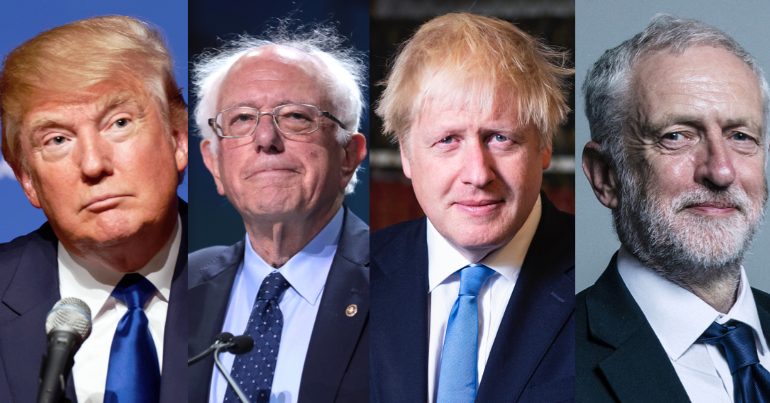 It was perhaps fitting that the end of Jeremy Corbyn’s term as leader of the UK Labour Party and the suspension of Bernie Sanders’ 2020 presidential campaign in the US happened just a few days apart. There have undoubtedly been numerous parallels – both positive and negative – between the progressive insurgencies they’ve led in their respective countries. While each man certainly made his fair share of unforced errors, hostility from corporate-owned media was undoubtedly the major cause behind their failure. Sanders and Corbyn weren’t only denied a fair hearing but were subjected to vicious and uncompromising attacks based on flagrantly fabricated smears and false accusations.

And what makes this outcome all the more dejecting is the fact that they not only put social democratic ideas back on the agenda, they also brought back a much-needed element of civility, decency, and dignity to public affairs – the very things that right-wing pundits at corporate media outlets have been castigating the loss of for decades.

As the dust settles and politics returns to the status quo ante, it’s time we call out the shameless double standards of these pundits. Particularly those who have spilt ink whining about a decline in public decorum, yet attacked Corbyn and Sanders while simultaneously giving a free pass to their political rivals, no matter how crude and vulgar they might have been.

The media’s race-to-the-bottom has included all the usual suspects. Throughout Corbyn’s leadership, the UK’s (overwhelmingly billionaire and corporate-owned) mainstream press has plumbed new depths – from outrageous headlines at the gutter tabloids like the Sun and Mail, to less sensational, but just as dishonest, attacks in higher-brow publications. Scholarly research has confirmed an overwhelming media bias against Sanders and Corbyn. One report found that 75% of the coverage about Jeremy Corbyn was not only biased but actively misrepresented him and his views. A similar study in the US by Fairness and Accuracy in Reporting found that the Washington Post had run 16 negative stories about Bernie Sanders in 16 hours.

In a highly competitive field, the prize for the most glaring peddler of wilful bias may go to the conservative essayist Anthony Daniels, better known by his pen name Theodore Dalrymple. Beginning in the 1990s, Daniels has become moderately well-known in literary circles for his essays about the British ‘underclass’.

Daniels’ writing often focuses on what he sees as the decline in manners, self-respect, decency, and personal responsibility in both public and private life in the UK. And for Daniels, the blame for this decline lies squarely with Britain’s political and intellectual class, along with their purported embrace of popular culture at the expense of high culture. This criticism, however, is seemingly reserved almost exclusively for those who he considers left of center.

He made much, for example, of Tony Blair inviting Oasis’s Noel Gallagher to an official reception at No 10 Downing Street shortly after Labour’s 1997 election victory. Recalling an Oasis concert he once attended himself, where he witnessed one of the Gallagher brothers making liberal use of the ‘F word’, Daniels noted an “attitude of untouchable snarling insolence”. Daniels concludes:

What is the point of restraint and circumspection if such stream-of-consciousness vulgarity can win not merely wealth and fame but complete social acceptance? For the hundreds of thousands of young men and women who have been to Oasis concerts, what is good enough for the Gallaghers and the prime minister will be good enough to them.

…but not even-handedly, it seems

If Daniels applied this standard evenhandedly, he should have celebrated Corbyn and Sanders’ entrance into the political mainstream. After all, they have been noted (even by political rivals) for their gentlemanly conduct. Throughout their political careers, they have made a point of never engaging in personal abuse against their political adversaries – even when there’s been flagrant provocation.

But for Daniels, apparently, none of this even merits an aside. Rather, he’s been a consistent peddler of all of the usual smears against both Corbyn and Sanders. This has included the hackneyed and completely discredited argument that ‘socialism always fails because Venezuela’ (in an article titled I Have Seen London’s Future and It Is Caracas) and the equally discredited antisemitism smear (in an article that contains as its subheading the absurd statement “Leftist anti-Semitism is inseparable from leftist economic doctrine”).

Yet when it comes to politicians on the political right, he takes the complete opposite tack. Far from castigating the horrendous effect that Donald Trump and Boris Johnson – the two leading figures of the political right in the US and UK respectively – have had on public discourse, he’s been (at best) giving them a free pass.

A long, chequered history of disgrace

This can only be described as base hypocrisy, given that Trump and Johnson are two of the most vulgar and prurient-minded individuals ever to have achieved political office in any country. The list of their disgraceful comments and thuggish behavior is far too long to exhaustively list here. But to give a short summary, Trump’s ‘highlights’ include:

Needless to say, if Corbyn or Sanders had ever said or done anything remotely resembling any of these examples, we surely would have never heard the end of it from the likes of Daniels. Yet we haven’t heard a peep out of him on any account.

Rather, Daniels has seemingly engaged in desperate mental contortion in order to defend these two characters. He wrote one article, for instance, in which he ridiculed comparisons between Trump and 1930s European fascist leaders – in spite of Trump’s obvious and well-documented fascistic tendencies. He states:

You could only compare Mr Trump to Hitler if you had absolutely no faith in the American political system, and if you thought every last provision in the Constitution for restraints on power had been vitiated.

Of course, the very same thing was naively said about the constitution and political institutions of Germany’s Weimar Republic shortly before Hitler’s rise to power. And Trump has even himself retweeted at least one quote from fellow fascist leader Benito Mussolini, whose totalitarian dictatorship in Italy fought alongside Hitler’s Third Reich in World War II. This is in addition to reportedly stating to advisers that he’s “not going to be beholden to courts anymore”; given tacit endorsement to racism and political violence, and openly mused about whether he might “stay [in office] longer” than he is constitutionally allowed – three of the classic hallmarks of fascism.

Nonetheless, in the very same article, Daniels described the use of the word “resistance” on the part of Trump’s critics and political opponents as “absurd, but also dangerous”. Note the incredible intellectual duplicity going on here. For Daniels, Trump ought to be judged not according to his behavior or public pronouncements, but according to the US constitution’s ability to constrain him. With the goalposts now conveniently shifted to how he wishes to frame things, Daniels can denounce Trump’s critics as the “dangerous” ones rather than Trump himself.

Upon learning of Boris Johnson’s re-election in 2019, meanwhile, Daniels spoke of his “great relief” at hearing the result. The article in which he wrote this was titled No Final Victories – which ironically is part of a quote from Corbyn’s political mentor Tony Benn.

And what Daniels doesn’t say is just as revealing as what he does say. He stated in a 2018 article, for example: “of all the forms of music that I abominate, rap is by far the worst”. Yet when Donald Trump held a meeting in the Oval Office with Kanye West, a rapper whose lyrical content makes Oasis songs seem like nursery rhymes by comparison, Daniels wrote nothing in response. It seems that it’s only when left-of-center politicians give tacit approval to the vulgarities of popular culture that Daniels’ outrage is piqued.

What is the motivation for these clear double standards? It’s tempting to engage in the kind of pseudo-Freudian analysis that Daniels casually applies to his adversaries on the left, because such condescension is so often a form of psychological projection. As it happens, Daniels’ father was a communist who collected a vast trove of Marxist tomes. Could it be, then, that his writing career has been a lifelong rebellion against his father?

…because that’s what pays

Alas, the explanation is far more mundane. Right-wing publications and think tanks have, for rather obvious reasons, much more money than their counterparts on the left. The Manhattan Institute with whom Daniels is a fellow, for instance, receives money from the ‘charitable’ foundation of the family of the late chemical and munitions tycoon John M. Olin and other such right-wing billionaires. Attempting to feign jest (which, of course, is often revealing), Daniels freely admitted during an interview on Brazilian television, “I’m a man of principle; I write for anyone who will pay me”.

In other words, he’s an intellectual mercenary. So his attacks on Corbyn and Sanders are as cynical and calculated as his pathetic attempts at defending Johnson and Trump. He knows that on both counts, this is what his wealthy, right-wing paymasters want to hear. And as progressives regroup in the wake of the Corbyn and Sanders eras, the need to call out Daniels and his ilk on their puerile nonsense and shameless double standards become greater than ever.