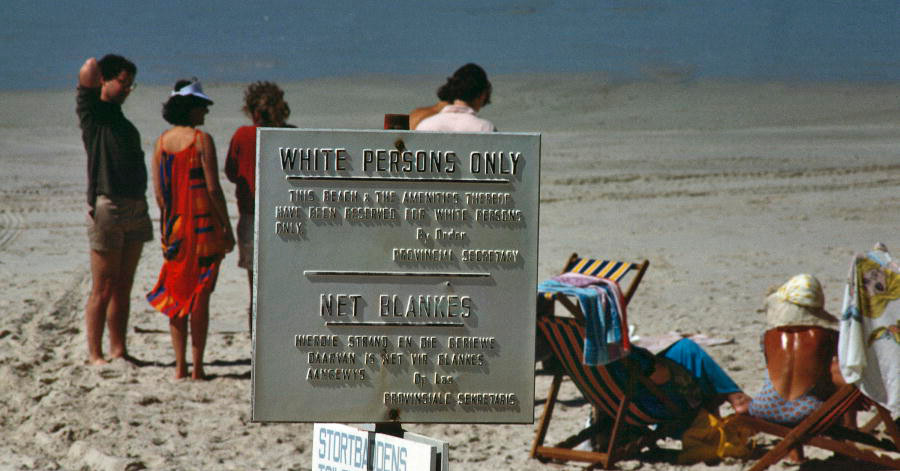 Sometimes it’s hard to see the systems of oppression we’re living in. This is especially true when you’re not directly subjected to that oppression yourself. I say this as a caution, not as an excuse. Here’s why.

I was born in South Africa in 1974. That year John Vorster, a staunch proponent of apartheid, was re-elected president in a ballot in which only white people could vote. Nelson Mandela was in prison and the ANC was a banned organisation. I grew up in a whites-only suburb of Johannesburg, went to a whites-only school, and rode on whites-only buses to get there. My parents both worked and were rarely around after school so it was Nancy, our Black maid, who welcomed me home each day, made me food, and asked how my day was. Nancy was someone who cared for me and who I loved in return.

The only other Black people I knew were the domestic workers of friends and family, or people working in other service roles around me, and my interactions with them were always friendly and positive. It wasn’t until I left South Africa, aged 10, that I heard the word apartheid or had any real inclination that something was deeply and systemically rotten in the country of my early childhood. Looking back now, it seems almost impossible to believe that I didn’t know what was going on – but that was the case.

My family didn’t talk about ‘politics’

Part of the reason was that the South African government was very good at keeping the worst of apartheid crimes hidden. During my time in South Africa, I never heard about the uprisings in Soweto, the murder of Steve Biko, the constant struggles for justice, or the violent repression by the police and military. State censorship of the media was ubiquitous and enshrined in law and my family didn’t talk about ‘politics’. There were, however, signs of the rot of racism in the everyday speech of white people around me, common tropes often repeated, that Black people were ‘lazy, stupid, dangerous, dirty…’.

One day, Nancy was unceremoniously fired and kicked out of the ‘maids quarters’ where she lived at the back of our house after a loud argument with my parents. My hurt and tears were brushed aside, and no proper explanation was given as to why she had to leave. It was the last time I saw the person who helped raise me, a far from uncommon tale in a country where ‘the help’ often had closer relationships with the children than the parents did.

I want to pause at this point to acknowledge that I feel deeply ashamed about all of this, and that this shame sometimes keeps me from speaking about it. But I also know that not speaking up and being honest, even when it’s painful or shameful, is part of the problem. I also want to acknowledge that the vile views expressed by people around me have surfaced in my own mind over the years, not because I agree with them, but because they were planted there by a white supremacist society when I was a child. And that is exactly how racism works, and why we must be vigilant to any unconscious biases that might arise in ourselves as a result.

Although the sorts of racist views expressed by individuals in South Africa were horrendous and damaging, they were just the tip of the iceberg of the systemic and structural racism that surrounded me but was never talked about or acknowledged. In so many ways, as a white child, the white supremacist system of apartheid was hidden in plain sight.

When I arrived at a south London comprehensive in the 80s, that all changed. The questions I tended to be asked by the other kids were, “did you grow up in a mud hut?” and “why do you hate Black people?” The first amused me, the second shocked me. It was a baptism of fire and I quickly understood and was horrified by why people would think that.

As a result of these experiences, I learned to question what is presented and accepted as ‘normal’ by the society we are living in, and to try to seek and listen to the perspectives of others who might have different lived experiences to my own. I don’t pretend to know what it’s like to live in Black or Brown skin, or even to be assumed to be non-white (my pale freckled skin and red hair point strongly to my Scottish ancestry). So I make sure I listen closely to those who have first hand lived experience of what it’s like to be a Person of Colour in a racist, white supremacist world.

Apartheid in South Africa effectively ended in 1994 with the election of Nelson Mandela and the ANC, but the white supremacist legacy that enabled it to exist in the first place lives on in the hearts and minds of millions of white South Africans. They may not say so openly, but many still don’t see Black South Africans as equals and cry crocodile tears at being ‘disadvantaged’ by Black economic empowerment, while the Black majority are still overwhelmingly in service to the white minority.

Although South Africa’s blatantly racist apartheid policies make it an obvious example of systemic racism running throughout all levels of society, the US and UK’s history and current condition are still very much part of that same white supremacist legacy. The rallying cry “Black Lives Matter” is only necessary because time and again it has been shown that on a deep and structural level in many parts of society, from the police to politicians, Black lives are not seen as being as important as white ones.

When a white supremacist like Dylan Roof can gun down Black people in a church then be calmly arrested but an unarmed Black man like George Floyd peacefully going about his business is choked to death by the police in front of witnesses, you know that Black lives are seen as less valuable by those police officers. When the president of the United States tweets about shooting unarmed Black people and Britain elects someone who described Black people as “piccaninnies” with “watermelon smiles”, you know we are still living in a white supremacist state.

Just as I couldn’t see the apartheid system all around me in South Africa because of my privilege as a white person within it, many white people today cannot see the white supremacist oppression that exists around them. They don’t have direct lived experience of it.

We cannot move beyond our shameful legacy of colonialism, slavery, and apartheid until we collectively and publicly acknowledge that they live on in the hearts, minds, and actions of millions of white people at all levels of society. We need to accept that every white person benefits from white supremacy and all Black lives are still massively disadvantaged and adversely affected by it. Until we acknowledge this, we will never truly be able to address the systematic racism that exists across every sphere of our society.