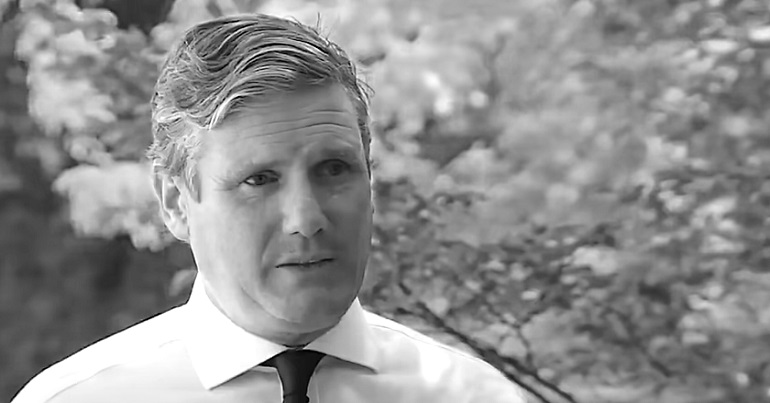 Keir Starmer has announced a revived approach to the military from the Labour Party, to coincide with Armed Forces Day. But his approach just cements the notion that the new, rather “Blue“, Labour leader is little more than a political opportunist and charlatan; one who’s willing to out-Tory the Tories in an attempt to gain power.

Bring out the bunting

As LabourList reported, Starmer has renewed the party’s views on the military. It wrote that he:

has launched a new Labour Friends of the Forces engagement programme on Armed Forces Day, declaring that he is ‘proud of my country and proud of those who serve it’.

The Labour leader will reboot the scheme – originally founded in 2011 – today with a virtual roundtable joined by members of the service community to ‘open up Labour again to our armed forces’.

This follows on from shadow defence secretary John Healey’s statement on Friday 26 June. Both used the military’s work during the coronavirus (Covid-19) pandemic as part of the reason for their praise of service personnel. Healey wrote that:

It is time to end this decade of decline. And I want to see ministers act on three fronts. First, give military personnel the priority they deserve with a full chapter in the government’s integrated defence and security review later this year – just as Labour in government did in 1998. Second, overhaul the country’s covenant with serving forces to make good the failings of the last decade. Third, speak up more strongly in public to support the very special service the men and women in our armed forces give to this country. And not just on Armed Forces Day.

But is Labour’s sudden surge of commitment to the armed services really something new?

All a bit Corbyn. Kind of.

On the face of it, Jeremy Corbyn’s 2019 manifesto commitments on the armed forces actually went a step further. Corbyn’s manifesto pledged:

An end to failing privatisation

No mention of this from Starmer and his team. So, it seems that Starmer and Corbyn weren’t that far apart on military policy. But they were actually a world away. Because the key difference is the ideological positions they come from.

Corbyn has always been anti-imperialist, but claimed in 2017 not to be a “pacifist”. What he does oppose, however, is Western-led wars that serve corporate and colonial interests. Starmer’s record, meanwhile, is a mixed bag of liberal, blue-tinged centrism. He voted against an investigation into the Iraq war; for the renewal of Trident but against military action in Syria in 2015. As a lawyer, he even wrote a piece in the Guardian in 2003 which essentially questioned the legal basis for the Iraq war. And as the Oxford Political Review wrote, he ‘dovishly’ pledged during the Labour leadership campaign:

Yet, he appointed Healey (who voted for the Iraq war) as shadow defence secretary. His appointment of Lisa Nandy as shadow foreign secretary is also a mixed bag. She too voted against Syrian intervention in 2015, but voted for action in Libya.  And Starmer himself was still a member of the hawkish, extra-governmental and crony capitalist Trilateral Commission in 2018, while in Corbyn’s shadow cabinet. Clearly his foreign policy and military views are nearer those of the centre-left than, say, Tony Blair. So, why this flag-waving, bunting-adorned move now?

Starmer probably thinks supporting the armed forces is being class conscious. He clearly has the ‘Red Wall’ that fell to the Tories last year at the forefront of his mind. And, as I previously wrote, it’s all a bit “Blue Labour” – patriotic, flag-waving and Sun-reading, but with lots of renationalisation in the mix. Except what Starmer is doing in his bid to win back de-industrialised former heartlands is showing his contempt for working class people. And he’s also demonstrating his own internal biases.

People in the lowest social grades (that is, the poorest people) aren’t stupid. Nor are they all white and Staffordshire Bull Terrier-owning. We don’t all bring out the bunting every VE Day, nor watch the Queen’s speech at Christmas. And for those that do, there’s a reason for this. It’s centuries of conditioning, propaganda, poverty, and misery that’s been forced down their necks by the feudal, initially industrialised, and finally corporate capitalist systems. Yes, some working class people are ‘lager louts’, racist flag-wavers who are just plain nasty. A man living in my neighbourhood would quite happily come out and clap for the NHS every Thursday. He also threatened to “burn” his “black c*nt” neighbour’s house down.

But the correct response to these paradoxes of diversity and bigotry isn’t to try and ‘dovishly’ appeal to the latter. It isn’t to dress up corporate capitalist narratives as liberal patriotism. Nor is it to use the army’s coronavirus work as a cynical hook. It’s to try and understand why these views exist in the first place. Then to come with an argument and agenda that can change people’s minds and ultimately unite all of us. It’s where Corbyn tried, but where him and Labour leaders who came before him have failed. You only have to look at the gradual drift of working class voters away from the party over 15 years to see this.

Moreover, it shows Starmer’s lack of principles. Clearly he possesses some anti-war inclinations. But he’s also willing to abandon these if he thinks it will give him political leverage. This exploitation of class, and the use of stereotypes, aren’t the actions of someone interested in egalitarianism. They’re of a charlatan from a fairly working class background who’s pulled the ladder up.

Starmer could argue that the army is a representation of everything that’s wrong with the world. It exposes rich people who’ll quite happily kill off poor people for their own benefit. He could break down that nearly every war is about money and power for the few. That war is not in the interests of collective humanity – including the poorest people in the UK’s poorest communities. But he won’t. Instead he’s merely out-Johnsoning Boris Johnson in his bid to win back voters. And it’s tragic yet damning to watch.