'Police defunding' might not make sense in a UK context, but we still need nuance - Canary 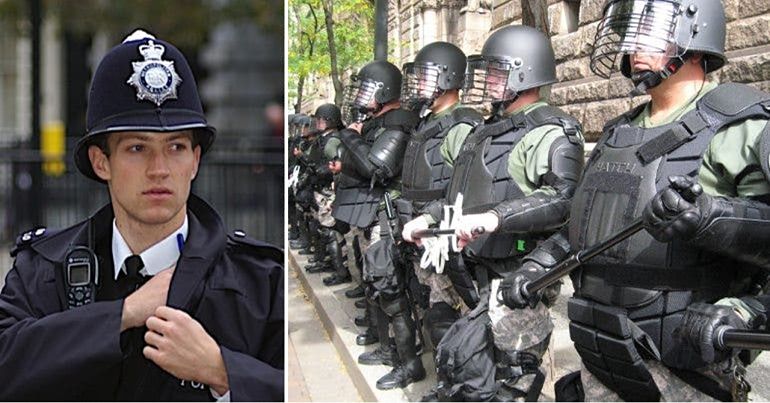 I recently wrote an opinion piece about Keir Starmer’s comments on ‘police defunding’. Its arguments have been met with considerable hostile reaction on social media. In particular, some readers have commented that my criticism of Starmer’s position is hypocritical given that The Canary has previously attacked the Conservative government for cuts in police spending and praised Jeremy Corbyn’s proposal to increase police numbers by 10,000.

I appreciate constructive feedback from readers and recognise that this article had a blindspot insofar as it did not make a distinction between the very different nature of police spending in the US and the UK. Whereas police forces in the US are often highly militarised and overfunded in order to purchase weapons and other military-style paraphernalia, in the UK the police force is even now still largely unarmed. In a UK context, therefore, ‘police reform’ is a more accurate term.

In short, the article lacked nuance. However, so did Starmer’s comments. Although I agree that the literal objective of defunding the police may not be applicable to the UK, Starmer’s position still demonstrated a lack of understanding about what motivates people in the US calling for ‘police defunding’ and how these ideas might apply in a UK context.

Is Starmer righter than the right?

On 29 June, Starmer responded to a question about ‘police defunding’ during an interview on BBC Breakfast. He described the idea as “nonsense” and said that he “would have no truck with that”. Worse still, he said that “nobody should be saying anything about defunding the police”. This appears to be a wanton call to suppress open debate about these matters.

My previous article argued that this puts him to the right of conservative commentators Anthony Daniels (aka Theodore Dalrymple) and Peter Hitchens. This is because, although they’re generally critical of the UK criminal justice system and think that it’s currently too lenient to criminals, their positions on the police nonetheless seem to be closer to those of ‘police defunding’ advocates than that of Starmer.

Let’s look at the original quotes

The quote from Daniels’ 2006 essay in City Journal, again, is:

In Britain, we once prided ourselves—rightly—on our unarmed police force. The police were the servants of the law-abiding citizenry, nothing more and nothing less.

Recently, though, the police have become more militarised in manner and appearance. Increasingly, they look like an occupying army, festooned with the paraphernalia of repression. This is not to say that they are effective in suppressing crime, however. On the contrary: the more aggressive they look, and the more bullying they become, the less effective they grow.

The quote I included from a blog post from Peter Hitchens written in 2015 at MailOnline is:

the job of the police is not primarily to ‘catch criminals’. Robert Peel persuaded a reluctant Parliament to agree to set up a police force because it would *prevent* crime.

Each crime and each arrest represents a *failure* of the prime duty of the police, which is to prevent crime and the disorder which encourages it. The system of regular preventive patrolling was developed to create an atmosphere of safety on the streets, to deter crime and disorder.

Standing by my argument, but adding nuance

My previous article argued that because of these sentiments, Daniels and Hitchens are to the left of Starmer on policing issues. Furthermore, I argued that Blairites generally are, in some respects, on the right of the political spectrum on law and order and civil liberties issues. For example, it was the Labour-right government of Tony Blair himself that introduced antisocial behaviour orders (ASBOs) and attempted to introduce identity cards. It was subsequently left to the Conservative government of David Cameron to repeal both of these disastrous policies.

I stand by these arguments. However, although the UK does itself have problems with police militarisation and would benefit from Hitchens’ idea of a more preventative model, the idea of ‘police defunding’ comes originally from the US where conditions are very different.

For one thing, spending on police in the US is much higher than in other developed countries. One recent report estimated that the US spends a total of $115bn per year on policing, which dwarfs most other countries’ military budgets, let alone police budgets. And at the same time, most US cities spend more on policing than on services such as education and housing.

As a result, in the US the police are often used as the first port of call for dealing with society’s problems. For example, the police are often tasked with responding to issues such as homelessness and violence within schools that would be better addressed by other kinds of interventions. As an article in the Atlantic puts it:

the United States has an extreme budget commitment to prisons, guns, warplanes, armoured vehicles, detention facilities, courts, jails, drones, and patrols—to law and order, meted out discriminately. It has an equally extreme budget commitment to food support, aid for teenage parents, help for the homeless, child care for working families, safe housing, and so on. It feeds the former and starves the latter.

This disparity manifests itself in some increasingly bizarre ways. For instance, according to some estimates, US law enforcement spends over 20% of its time dealing with people suffering from mental illness.

Proponents of ‘police defunding’ in the US are not necessarily advocating for the abolition of the police altogether. Rather they suggest that local and state governments re-channel some of the funds currently spent on police to more appropriate and effective ways of dealing with social issues which police aren’t well-suited to dealing with. This could include publicly-funded treatment for people with mental health issues and programmes to transition homeless people into secure housing. As one article in the Guardian put it:

The basic principle [of police defunding] is that government budgets and “public safety” spending should prioritise housing, employment, community health, education and other vital programmes, instead of police officers.

Therefore, as contradictory as it might seem on the surface, the central principle behind ‘police defunding’ is not incompatible with Corbyn’s proposal to increase police numbers. For starters, the UK doesn’t spend anything like as much as the US does on policing in the first place, which perhaps explains why Black Lives Matter UK remains neutral on the issue of ‘police defunding’.

Moreover, while Labour leader, Corbyn also supported heavily increasing spending on many of the above-mentioned services in addition to increasing police numbers. In fact, a Corbyn-led government would have almost certainly placed these in higher priority to his pledge to increase police numbers, which would fit the aforementioned definition from the Guardian.

But there is also another, more subtle, reason why Corbyn’s proposals adhered to this principle. And that’s the kind of policing that Corbyn was advocating wasn’t that far of a stretch from what ‘police defunding’ activists propose in the US. The Mirror reported in May 2019 that:

Mr Corbyn attacked the Tory cuts to police which have seen their numbers shrink by 20,000.

But he also emphasised the need for “community-based policing so we have policing by consent within the community”.

A few years earlier during an interview with CNN’s Anderson Cooper, then-shadow home secretary Diane Abbott likewise spoke of “the importance of having more community-based police officers”. Indeed, this is exactly what I argued in my original article on this subject:

[an alternative] could resemble a community-based public safety approach that works to prevent crime by, for example, settling disputes peacefully within neighbourhoods. This already forms an (albeit small) part of the UK’s law enforcement apparatus in the form of ‘community liaison officers’.

If Starmer had a more nuanced understanding of what is meant by ‘police defunding’ and how its proposals might play out in a UK context, he could have at least mentioned some of the above facts. But as I argued in my original article on this subject, and as others have argued elsewhere at The Canary, Starmer appears to want to position himself as a centre-right Blairite. Because, according to the Blairite narrative, this is the only way to be electable. And as I’ve previously argued, this forms just one part of a larger picture showing that he doesn’t have any interest in handing an olive branch to the outgoing Labour-left leadership.

To conclude, I accept and apologise for the lack of nuance in my first piece. However, I stand by my criticism of Starmer and the wider point that the UK does have something to learn from those calling for ‘police defunding’ in the US – notwithstanding the fact that police reform along these lines in the UK would not necessarily involve a literal reduction in funding.