As Chris Packham launches a stinging letter at Nicola Sturgeon, this eagle's death has to be the last - Canary 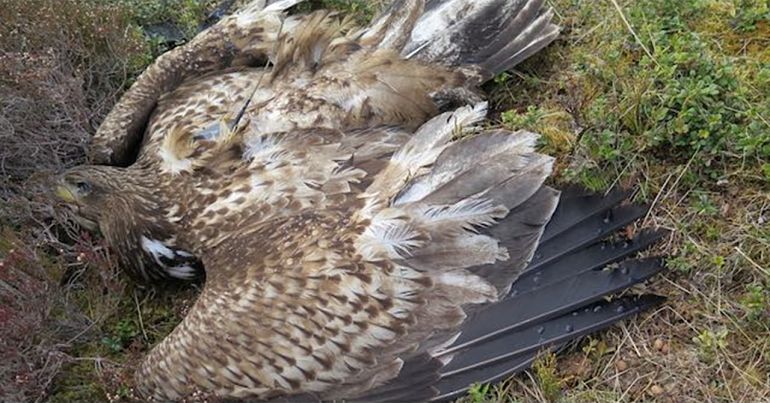 The Canary has reported on wildlife crime with depressing regularity. While it’s easy to associate ‘wildlife crime’ with activities such as poaching, trophy hunting or smuggling in various exotic corners of the globe, the UK is itself a hotspot.

A cockeyed approach to nature

There are deep-seated reasons for this. But the overarching problem is the division of animals into ‘sport’ species and ‘pest’ species. This has led us to an absurd situation where, for example, millions of non-native, artificially-reared pheasants are released into the wild every year, completely unbalancing the ecosystem. And then to protect them, there’s a zero-tolerance approach to any pre-existing creatures that might consider eating them.

Grouse shooting is slightly different from pheasant shooting in that the birds aren’t artificially reared. Instead, the moorland on which they live is managed extremely intensively to create, in effect, an open-air grouse zoo. But again, there’s what can only be described as a zealous obsession with removing any predatory threat to the ‘game birds’ in question.

Gamekeepers are allowed by law to kill certain species, such as carrion crows and stoats. But all birds of prey (raptors) have full legal protection. Despite this, it appears that some in the shooting community cling to outdated, pre-legislation attitudes. It would be fair to say that gamekeepers traditionally took a dim view of anything with a hooked beak. To the extent that the presence of such birds on an estate would have been seen as a poor refection on the local keeper. Of course, to hold such a view publicly nowadays would be to stand in opposition to the law. And yet…

As The Canary reported on 27 July, a dead white-tailed eagle (also known as a sea eagle) was found in Aberdeenshire. In fact, it was on a grouse moor within the Cairngorms National Park. Police confirmed the bird had died as a result of “pesticide poisoning”. No further details have emerged. This incident is just the latest in a shocking litany of deaths in the area. A year ago, The Canary reported on a young golden eagle seen close to the royal estate at Balmoral with a cruel spring trap clamped round its leg.

This poisoned eagle needs to be the tipping point. It’s one in a long line of victims that have been illegally killed inside this supposed National Park but it has to be the one that brings change. The Scottish Government simply cannot continue to ignore this depravity.

With seemingly no end to wildlife crime on the current Scottish government’s watch, TV presenter Chris Packham has written a stinging letter. Addressing first minister Nicola Sturgeon and environment cabinet secretary Roseanna Cunningham, Packham raises the recent white-tailed eagle poisoning. He suggests that an ongoing review of the grouse shooting industry “will be corrupted by parties with a vested and nefarious interest in protecting their criminal element”. He also punctures the myth of grouse shooting being vital to the Scottish economy, saying:

Figures suggest that almost one fifth of Scotland is given over to driven grouse shooting and yet if Scotland’s economy were the size of Ben Nevis this industry’s contribution would be the size of a small banjo.

He concludes by telling the ministers:

You are in dereliction of your duty to protect Scotland’s wildlife. You are demonstrating a wilful blindness to a national disgrace which shames your government, people and country.

It seems clear that waiting for the shooting industry to obey the law is pointless. And waiting for authorities to uphold the law is frustrating and largely fruitless. Many conservationists and nature lovers have sought instead to focus on raising awareness of the threat to some of the UK’s most charismatic birds. The hope being that as social attitudes develop, communities will become intolerant of those whose attitudes to wildlife belong to an earlier time.

The annual Hen Harrier Day seeks to do this. Named after the species perhaps most associated with moorland crime, this event aims to inform people about the issues and inspire a campaigning and educating response. This year, due to the coronavirus (Covid-19) pandemic, the event is taking place online on 8 August. It’ll be hosted by Packham and Megan McCubbin. In a press release, McCubbin said:

Hen Harrier Day 2020 will be a virtual event like no other, filled with science, art, music and the conservation of one of the UK’s most iconic birds of prey. It’s a day to celebrate the hen harrier’s glory, but also to highlight the environmental injustices of driven grouse shooting and illegal wildlife persecution. I am thrilled to be hosting it this year from the New Forest where we will be talking to the experts and encouraging our audiences to get involved so that hen harriers can safely soar across our moorland for generations to come.

I am looking forward to a great day helping raise awareness of this wonderful bird and its terrible persecution on driven grouse moors. I will be talking to inspiring young people, great experts and many others who want to see urgent change in our uplands so that hen harriers can continue to be part of these landscapes.

With so much wrong with the state of nature in the UK, it’s heartening to see any sort of response. Let’s hope people in general can move to a more enlightened understanding of the natural world. And then who knows? Maybe we’ll eventually drag the lawmakers and landowners along with us.