Dear Guardian journos: Johnson's not just 'workshy'. He sums up class privilege in how we define hard work. - The Canary 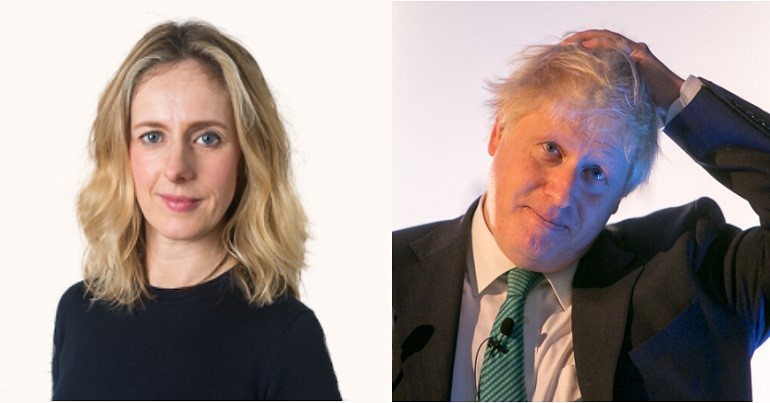 Boris Johnson’s been on holiday, in case you missed it. Much of the mainstream media has quite rightly been up in arms. But a column by Guardian writer Marina Hyde has branded the PM as “workshy”. And while Hyde’s piece is moving the narrative in the right direction, she sadly misses the point. Probably because she’s in the same social class as he is.

Infamy! Infamy! They’ve all got it in for me!

The outrage from all sides over the PM’s holiday in Scotland continues. The Daily Mail first revealed Johnson and his family were holed up in a holiday cottage, along with a tent, with the inevitable Carry On… film headline:

Johnson may well feel a bit like Kenneth William’s ‘Caesar’ after that:

Next, and the National reported that the PM didn’t get permission from the farmer who owned the land before he pitched his tent. It wrote that the farmer said:

Mr Johnson is meant to be leading the country and yet he is not setting a great example. Usually if people want to go inside a fenced area they ask for permission first, but I was not asked at all. He could have put up his tent in the garden of the cottage and there would have been no problem – but didn’t do that.

As writer Alex Tiffin pointed out, Johnson pitching his tent in a field probably wasn’t breaking any laws:

If Journalists want to shout about Boris Johnson illegal settings up a tent, at least learn how Scotland's land access laws work first.

Freedom to roam applies and unless there's crops, (grass isn't considered a crop), pitching a tent is legal.

But Johnson did reportedly leave the burnt-out embers of a fire by the tent; a mess which someone else had to clear-up – and an analogy which in a few years may well be endemic of his time as PM.

Then, on Saturday 22 August, Guardian columnist Marina Hyde waded into the ‘Johnson holiday’ debate, with a scathing piece on his “workshy” approach to running the country.

must be the chilliest place the prime minister had ever secluded himself, until I remembered he hid in a fridge during the general election.

Hyde went on to catalogue Johnson’s history of absenteeism:

Unless it involves self-advancement, of course, Johnson has always been workshy. Present, but not involved. When he was London mayor, he appointed deputy mayors who did his entire job for him, freeing him up for technology lessons and so on. The only bit he had to do was figurehead stuff – and yet, when his own city exploded in riots, who couldn’t be arsed coming back off his holiday but the mayor himself. The pattern has been repeated for every crisis, from floods to Covid Cobra meetings.

Of course, as with much of the middle class, liberal left, Hyde is quick to admonish the PM, while accepting no responsibility for his election last December. Maybe if her and others from the Guardian hadn’t actively worked to undermine Jeremy Corbyn’s Labour Party, we wouldn’t be having this conversation about Johnson and a “yurt” in the first place. But all this misses the bigger point with Johnson’s lackadaisical attitude to running the country. And it’s not that he’s lazy. He’s just behaving as entitled people of his socioeconomic background do.

Look: no one more than me understands the realities of a backbreaking few hours down the whimsy mine.

But I think she misses the point. Johnson’s workshy attitude and her own implied admission that column writing isn’t really hard work avoids the bigger issue: that the poorer you are, the harder any type of work is.

I’m writing this as someone who has experienced various worlds. I’ve worked in a sausage factory, processing meat at 5am; I was a kitchen porter for a well-known pizza chain; I was a hotel manager responsible for 150 members of staff and a budget of £6m; I was a support worker for learning disabled people and now I’m a journalist/columnist and broadcaster. I can hand-on-heart say that working a 28-hour shift in a hotel, without sleep and just with fag breaks, is not more or less hard work than the extreme levels of concentration required to write an in-depth analysis of why Dominic Cummings is responsible for the A-Levels chaos. One type of work is physically demanding, the other mentally. Both burn calories (the brain accounting for at least 20% of a person’s energy use), and both have their challenges. The difference is what else you’re trying to juggle while doing said work.

Alongside my current jobs, I’m also an unpaid carer to my chronically ill and disabled partner. We’re on Universal Credit, as I can’t work the hours required to give us a living wage. If I was, say, in Hyde’s position (privately then Oxford-educated, and probably earning a decent whack for writing 1,000 words) then yes – my writing wouldn’t be half as difficult as it is. It would still be ‘hard work’, though.

What makes my job so difficult is everything else I have to contend with:

She’s literally gone into a gastroparesis flare as I’m writing this – so that’s me up and down the stairs, emptying her sick bucket every half an hour.

This is the point Hyde misses, in her well-meaning attempt to show class consciousness. Rating work in terms of how hard it is is unhelpful, as is distinguishing Johnson as workshy. Because it’s your socioeconomic status which determines the perceived ‘difficulty’ of the work.

Johnson and Hyde don’t have to worry about whether or not the council tax will be paid this month. Nor do they have to concern themselves with setting aside enough money to buy their child’s school uniform – and what this cost is going to be at the detriment of. Food? Hot water? I’m not sure, yet.

Nor do either of them live in socioeconomic “time poverty” – a notion not often recognised but one that disproportionately affects the poorest people. People like Hyde and previously Johnson (when he was a Telegraph columnist), as she puts it, work down the “whimsy mine” and have a shower “during” their shift, too. Meanwhile, I struggle to find the time have one every other day.

The PM may well be workshy. But the bigger point is that him and Hyde are in positions where, due to their socioeconomic status, they can get away with it.

Johnson’s holiday during a time of national crisis may well be ill-judged. Maybe he shouldn’t have gone on holiday at all. He has been described as lazy, with, as Hyde puts it, the:

Mind of a show pony, body of a Shetland pony.

But of course he is. He’s upper class. His and Hyde’s ideas of hard work are worlds away from mine, because they don’t have umpteen external and uncontrollable forces increasing the pressure on them ten-fold. Johnson probably believes he works hard. Hyde seems to believe she doesn’t. If I could do my job out of a private home office, with no distractions and Waitrose on speed-dial for lunch, then maybe I, too, would make the “whimsy mine” analogy. But that’s not the world I and millions of the poorest people in the UK inhabit.

Until we realise Johnson’s laziness is more about his worldview due to his socioeconomic status than whether or not his job is hard, then we’ll continue to judge people based on societal perceptions of what’s hard work and what isn’t. Life makes work harder for some than others, not the actual job itself. And until there’s a level playing field in society, where we can all focus on work as much or as little as we want to, then many of us will still be held back. Poverty and institutional, systemic classism drive hard work.

With that in mind, I’m off to clean up sick, while Hyde is enjoying reading a column in the Financial Times. Where Johnson is, that’s anyone’s guess – and in all honesty, I don’t really care. On my poverty-induced list of priorities, his whereabouts and work ethic are really low down. They really shouldn’t be. But the fact that they are ultimately sums up the problem.

Featured image via the Guardian – screengrab and Chatham House – Flickr