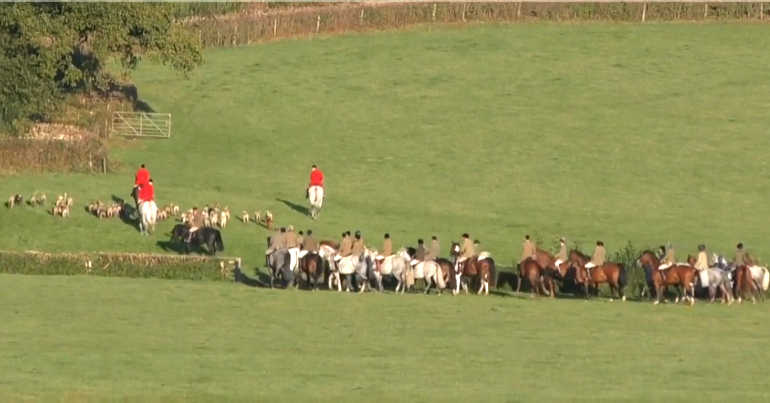 Right now, chainsaws are cutting down some of the UK’s last remaining ancient woodlands for corporate profit, and protesters are being assaulted. Meanwhile, not far away, the rich continue to use our woodlands as their playground, hunting fox cubs for pleasure.

Our countryside isn’t for the likes of you and me: it’s a haven for the wealthy to do as they please and for corporations to plunder.

This reality becomes even starker if you’re unlucky enough to come across hunters on horseback terrorising foxes.

Latest footage filmed by Somerset Wildlife Crime (SWC) shows around 60 huntsmen of Blackmore and Sparkford Vale Hunt (BSV) sending their hounds into woodland to hunt for a fox cub, while the men surround the trees to make sure that the cub can’t escape. After 40 minutes, the fox does escape, and the men yell at their dogs to chase the poor creature.

They chased foxes right in front of our cameras, no social distancing. Dorset police attended and stated social distancing was NOT enforceable, and that they were exempt from [the] rule of 6 AND there was no limit to how many could attend. This was a day that saw 6,042 new COVID cases.

This practice is BANNED. It is an illegal activity. Since 2004 the practice of hunting with hounds was made unlawful following the Hunting Act. They aren’t following a trail, as you will see from the video, they’re chasing foxes, intentionally and deliberately.

SWC’s latest video shows cub hunting, or cubbing. Bobbie Armstrong is one of SWC’s monitors. She explained the practice to The Canary:

Cub hunting involves small wooded areas being surrounded by the field riders… Once the hounds are in the wood, the huntsman will encourage them to hunt using a range of voice and horn calls. The riders surrounding the wood are tasked with keeping the fox in: they don’t want an open chase. The idea of cubbing is to train the young hounds to chase and kill in a controlled environment: if you like, it’s their induction to hunting!

Most hunters tend to wear tweed, or ‘rat catchers’ during cubbing. This is a tactic to avoid looking like they’re hunting. They often claim that they’re doing ‘hound exercise’, but as our video shows, they are most certainly chasing cubs. The Blackmore and Sparkford Vale do wear redcoats during cubbing: they’re a particularly defiant and arrogant bunch.

Literally getting away with murder

In January, a BSV huntsman was found not guilty of offences under the Hunting Act. This verdict was met with anger, as the court was given footage which showed a pack of hounds as they chased a fox through the churchyard. The huntsman and other hunt staff made no attempt to call the hounds off the fox.

But it comes as no surprise in a country that serves the upper classes. Animal rights campaigners Stop The Cull say:

Whilst most of the country grapples with new coronavirus laws, Boris and his chums can continue with their “sports” of pheasant shooting (which starts today) and fox hunting, the rule of 6 doesn’t apply to them for some reason.

As you read this, there are activists on the ground actively intervening to try and stop the murder of badgers and foxes. And there are more up in treehouses, trying to protect the last of the badgers’ and foxes’ habitats. Join them.