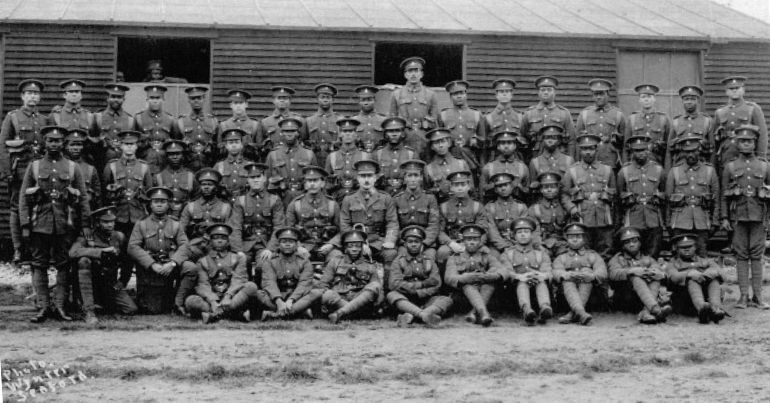 At the outbreak of World War I, Britain recruited people from its colonies in India, Africa, and the West Indies to contribute to the war effort. As a result, millions of Black and Brown soldiers and auxiliaries saw service. However, from the British West Indies Regiment and the King’s African Rifles to the African American Harlem Hellfighters, the non-white servicemen who fought, worked, and died in the war have been eradicated from our history.

Beyond the western front

While recently erected war memorials in Brixton and Cardiff dedicated to servicemen of Colour are a step in the right direction, they present a deeply sanitised version of history. Black and Brown servicemen and auxiliaries experienced the horrors of the war alongside their white counterparts, but were also subjected to racist abuse in life and neglect in death.

During World War I, white supremacist ideas about racial difference were used to justify the use of non-white servicemen as cannon fodder. Black troops were the first to be deployed in battle, thought to be ‘savage’, “primitive”, and less able to feel pain. It’s reported that WWI resulted in the deaths of more than one million people in East Africa. Those who attempted to escape were whipped, others killed.

The immediate post-war period saw a resurgence of racist violence across Europe and the US. This was stoked by fears that Black and Brown servicemen, emboldened by the experience of fighting white men and sleeping with white women, would seek to challenge the established racial heriarchy. In 1919, anti-Black race riots erupted in British port towns and cities where Black veterans had settled. Black Britons were targeted, and some were murdered, including Charles Wotten, who had recently served in the war. Meanwhile, white servicemen led mob violence against Black veterans, lynching Black servicemen in cities across the US to restore the ‘Jim Crow’ racial order which had been threatened by African American contributions to the war effort. The collective amnesia of these post-war atrocities is unacceptable.

The defacement of Churchill’s statue in Parliament Square during the 2020 Black Lives Matter protests shone a light on the whitewashing of British history. As secretary of state for war and chairman of the Commonwealth War Graves Commission during the first world war, Churchill was responsible for the policy of burying hundreds of thousands of African troops and auxiliaries who died serving Britain in unmarked mass graves. In contrast, German prisoners of war were buried in individual graves with engraved headstones alongside their British enemies. This speaks to the unifying power of white supremacy.

The remembrance of those whose lives were taken during both world wars forms an integral part of our national heritage. The unjust omission of the contributions and experiences troops of Colour feeds into the ahistorical narrative that Black and Brown people haven’t contributed to British history, and therefore don’t belong in its present. If we want to build a positive future, we must acknowledge and atone for the atrocities that have taken place in the past. It is time for us to make a concerted effort to undo the whitewashing of British history.