Gun-wielding hunters use a JCB to attack an activist's vehicle, trapping people inside - The Canary 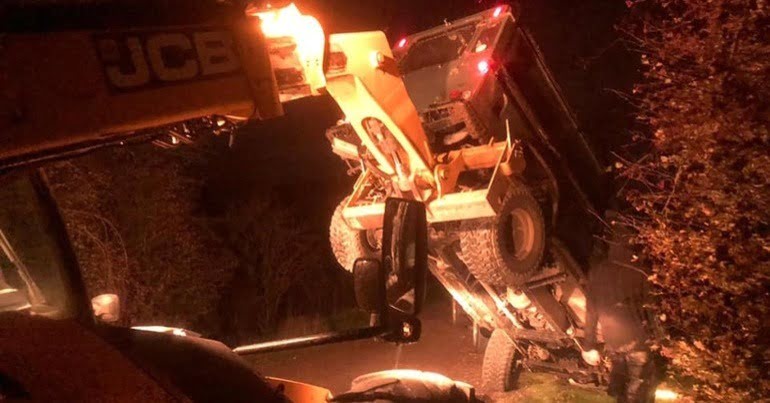 While we’re in the grip of lockdown number two, many of us are stuck in cities, getting our exercise by jogging in parks or down polluted streets. The gyms, swimming pools, and sports clubs are closed. But for a bloody-thirsty hunting community in Kent, seemingly not much has changed with a number of people continuing their ‘sport’ as normal.

At dusk on 20 November, animal rights activists were attacked by hunters on the Isle of Sheppey in Kent. The hunt saboteurs had received a tip-off that shooting was taking place, so they actively intervened to try to save the lives of ducks and geese. The activists also say that they were protecting marsh harriers from being shot. Marsh harriers are amber-listed birds, meaning the species is in the second-most critical group of conservation concern. The shooters deny that they were hunting the protected birds.

Tipping up a vehicle with people inside

It comes as no surprise that people who murder birds as a fun pastime also happen to be pretty aggressive towards humans. Needless to say, they turned on the activists.

The Hunt Saboteurs Association stated that:

[The shooters] became angry and frustrated on finding that they had sabs at their killing spree and turned their natural aggression on the sabs, pushing one into a ditch, attempting to run others over with a quad bike and breaking phones and cameras. When these attempts were unsuccessful they blocked the sab vehicle in on a narrow lane before attacking it with a spiked JCB.

Video footage shows the hunters using a JCB bulldozer to lift the activists’ vehicle up at a 45° angle, flipping it up onto its front tyres. Two people were trapped inside and could have been seriously injured.

The activists called the police, who did nothing. According to the Hunt Saboteurs Association, the police “were aggressive towards the sabs and refused to arrest the attackers”.

Don’t expect the police to help

[Saboteurs] face an uphill struggle to have their problems taken seriously by the police even when there appears to be clear evidence of assaults.

It seems that the police and the courts can be provided with all the footage in the world of illegal hunting, or assaults on activists, yet they continue to turn a blind eye. In fact, the Hunt Saboteurs Association recently published a leaked webinar, which stated:

what better than to produce a video to the court to say it wasn’t us encouraging the hounds on, it wasn’t our hounds in full cry, it was the gismo. It wasn’t an accidental kill because they interfered with the trail… what it will do is create that smokescreen or that element of doubt that we haven’t deliberately hunted a fox

Despite this, hunt saboteurs continue to go out, intervening to save animals and birds, in the knowledge that the police will do nothing to protect them from gun-toting thugs.