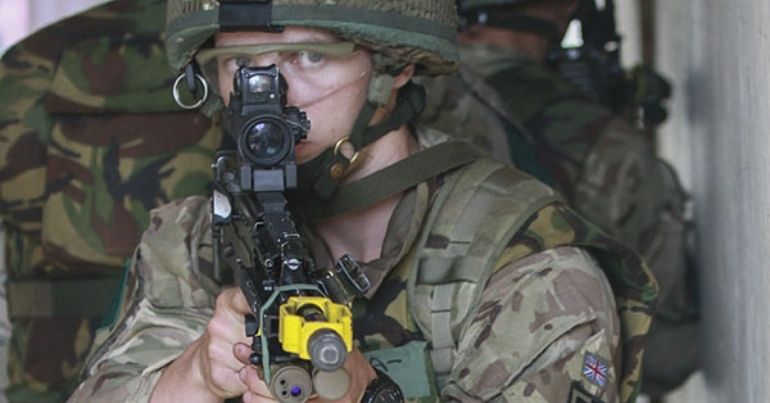 The British Army is reporting a substantial rise in recruiting due to the pandemic. A source told the Guardian that army recruiting quotas look very likely to be met, with the coronavirus (Covid-19) crisis serving as a “rallying cry”.

General Tyrone Urch, the British Army officer who was responsible for overseeing the Nightingale hospitals, was also interviewed. He told the paper:

In a uniquely demanding year for us all, it has been remarkable and really encouraging to see the huge numbers of talented young people looking to join the army.

Since recruiting was partly privatised in 2012, there has been a serious downturn in people joining. Recruiting targets were reportedly missed for “six years in a row”.

Unmentioned by both the military and the mainstream press was the way in which the Ministry of Defence (MoD), Tory MPs, and the military itself actively used the crisis to push recruiting campaigns.

Details were extensively reported in a Declassified UK investigation published in May 2020 which I co-authored. The investigation also examined how the crisis was being used to heal the reputational damage the armed forces sustained in the Iraq and Afghanistan wars.

Moreover, very little has been said on how job insecurity, poverty, and fear of a recession resulting from Brexit and the pandemic might also be driving the recruiting upsurge.

The army usually launches its recruiting campaigns every January, and 2021 was no different. This year’s theme is #FailLearnWin.

What's the first step towards victory? Failure.
You fail. You learn. So you win, when it really matters. #FailLearnWin

The campaign was developed by the PR firm Karmarama. This firm has also produced a number of army adverts in recent years including the ‘This is Belonging’ campaign.

A report into the #FailLearnWin adverts on the campaign website also seems to suggest the new video plays on young people’s anxieties:

The campaign is supported by research showing 76% of 16- to 25-year-olds feel held back by a fear of failure when taking on new challenges but 83% agree that failure is an important part of learning and growing.

Brigadier Phil Prosser joined Boris Johnson in the coronavirus press conference on 7 January. Prosser is an army logistician who will lead the army’s support for the vaccine rollout.

Both men adopted the kind of military jargoneering that would be familiar to any veteran.

Johnson vaguely told the press that the military would be using “battle preparation techniques” ahead of their deployment. His failure to clarify exactly what that meant (fuelling up vehicles? having breakfast? cleaning your teeth?) seems to suggest the term was more about sounding butch than any actual existing military process.

The Army will use “battle preparation techniques” to keep up the pace of Covid-19 vaccine rollout across the UK, with hundreds of thousands of doses per day administered by the middle of this month, Boris Johnson has said.https://t.co/bJG8mgeAZ9 pic.twitter.com/77iLBbdGWU

Prosser, likewise, slipped into military jargonese. It seemed to have been designed more for the press to carve out soundbites rather than public understanding.

The vaccine should be “in arms not on shelves”. The operation was “unparalleled in its scale and complexity”. “Extensive operational and logistic experience” would be brought to bear.

The military has made a big deal of its coronavirus work, some of which was undeniably positive. Other parts have, arguably, been somewhat misleading. One example is its touted support scheme for schools and colleges, which just turned out to be providing a helpline and webinars on testing.

It remains to be seen what impact the army’s renewed coronavirus response will have, or how well the new recruiting campaign will go. But, given how the military has brazenly used the pandemic to pull in recruits, its continued involvement demands proper scrutiny.