2,000 Canary articles later, I have a message for you all - Canary Workers’ Co-op 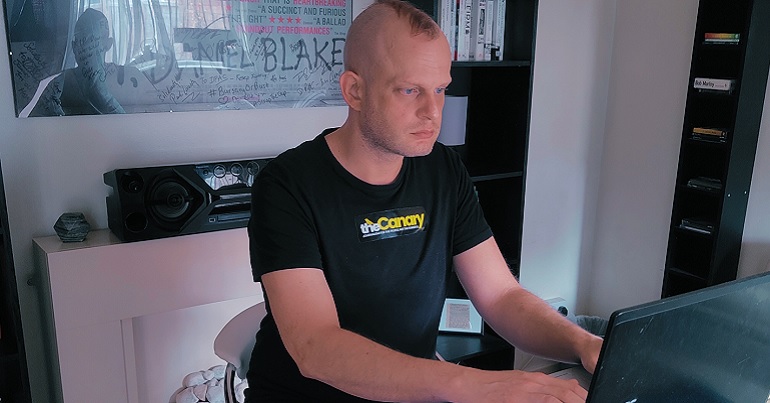 I’m overwhelmed and somewhat perplexed to say that this is my 2,000th article for The Canary. That works out at, after I factor in the year I stopped writing, over one article every day since April 2016. So, for this “accomplishment” (my editor’s wording) I want to tell you about mine and The Canary‘s journey to this point. But I also want to talk about the idea of ‘hope’ – and how, even when all seems lost, it’s the one thing that we have to hold on to with all our might.

The Canary: what a ‘journey’

I’m not a fan of insipid, X Factor-style ‘journeys’. But The Canary‘s flight from its humble beginnings to this point has been quite the voyage of discovery.

We started off with £500 and a vision of a different kind of media. After launching, things quickly progressed. I joined in April 2016 and soon realised that we were rattling a few cages. I’ll never forget former Unite the Union boss Len McCluskey mentioning one of my stories on the Andrew Marr Show. Things blew up – and the rest is kind of history. We had over eight million readers in the run up to the 2017 general election; my partner always reminds me of the time she watched me ‘sleep-typing’ in bed. I’ve had articles that have caused questions to be asked in parliament. My welfare coverage was being read by hundreds of thousands of people a month.

So, The Canary and my time with it has been unforgettable. I have to extend a huge thanks to the editorial team. Throughout my time here they’ve supported me 100%. This is despite countless errors of judgement on my part.

But alongside all this, The Canary has also been a central part of my life through what have perhaps been my defining years: a period that saw me finally finding my path in life after being on-and-off benefits since 2008; managing my alcoholism after a very public relapse in 2016; finding a partner accepting of my bisexuality; moving to London and gaining a stepson; coming to terms with my mother’s dementia diagnosis – and within all this, finding and developing my voice and guiding mantra in life.

But it can be exhausting living, observing, and then writing about the chaos that constantly engulfs our society. I live in appalling social housing. My family is answerable to the Department for Work and Pensions (DWP) via our reliance on Universal Credit. My partner is chronically ill and disabled and I’m her full-time carer. Money is a constant struggle. Ill-health permeates our lives. So, I know the dread that you feel every single morning when you wake up: wondering what pain, stress, or trauma the system and life will inflict upon you that day.

Hope springs from the darkest of places

But I also know that in the bleakest of times there can often be the faintest glimmer of hope; a chink of light piercing through the seemingly impenetrable dark. Moreover, life is transient, fluid, and in a constant state of flux. Whatever pain you currently feel will eventually wane. Whichever disaster has landed at your feet today will eventually be in the past – whether that be tomorrow, next week or in a year. And none of us definitely know what the future holds.

Yet the notion of hope is not an individualised phenomenon. We rely on other humans to ignite it and keep it burning in us. I see hope in my stepson’s eyes. I’ve seen it when disabled people blockaded Westminster bridge. I hear it when I listen to music. And I feel it when I embrace my partner. Hope also fills me when I look at The Canary and enter our newsroom. Because behind the garish, little yellow bird, the bold and brash headlines, and the smears that have been levelled at us throughout our short existence, there’s a team of people who really do care.

You may not always like the way we do things. Sometimes, you might not feel we live up to the expectations placed upon us. And you might not always agree with what we have to say. But we are a group of people who passionately hold dear the wellbeing of every other person and creature on this planet. We try every day to bring you the stories and information to start enacting change. So, we’re trying. And I know that each and every one of our actions come from a place of good.

The Canary is all about hope. It’s what started us in 2015. Kerry-Anne, Nancy Mendoza and Drew Rose hoped for something better for the media. Society’s hope is what drove us to the unexpected heights we reached during the 2017 general election. It’s what kept us going when financially we nearly sunk. And hope is what gets each and every one of us into the newsroom every day – despite the challenges many of us face. But hope is also what needs to form the next stage of The Canary‘s and, maybe, my own journey.

The Canary: where next?

We have reached a defining moment. Kerry-Anne has left. We have perhaps our most diverse team of talent to date. But what next?

For me, The Canary (and independent media more broadly) needs to be reaching the people that need it. Social media is all well and good. But we’re often only talking to the same people. It’s a club which needs more members; those we’re currently not engaging with. So, The Canary has to work out how we reach out into the most marginalised and oppressed communities in the UK. They’re communities like my own. Here, poverty and inequality are rife – but hope is often sparse.

Our failed systems of economics, government, and politics have shown that for things to change in this country and around the world we need to take things back to basics. We have to go back to planting the seeds of change in the smallest of communities. Then, we nurture them to grow from there. The Canary has to be central to this. But how we position ourselves there is an ongoing conversation we need to have, not just with ourselves but with our readers too.

We have to decide

I’m privately a bit of a Lord of the Rings geek. Of the many passages from J.R.R. Tolkien’s work that stand out, one always comes to the forefront of my mind:

‘I wish it need not have happened in my time,’ said Frodo.

‘So do I,’ said Gandalf, ‘and so do all who live to see such times. But that is not for them to decide. All we have to decide is what to do with the time that is given us’.

I believe this is fitting for the times we currently live in. Humanity is perhaps at its most monumental crossroads since the dawn of civilisation. The struggles most of us face have not changed, but the backdrop of the climate catastrophe has shone a glaring light on them. Saving our species and the planet is one challenge. But with that comes another: not allowing ourselves to continue in the way we have before. We have to find a new way of existing. It must be one where everyone is truly equal and power is no longer in the hands of a few. Because it’s this which has led us to this point in the first place.

One person is enough

So, we need hope. The Canary has been and always will be a part of that. You, our readers, are too. I often feel hope is far easier to lose than it is to keep. It is too often out of reach. But those of us who can hold on to it, even fleetingly, have a responsibility over it. We need to spread hope as far as our eyes can see. It’s not some specific idea of what the world could look like. It’s the idea that the world can look different to the one we inhabit now. That’s up to all of us to achieve.

My work has always been driven by one underlying hope. If I can reach one person and change their life, then my job is done. If one person can give someone else the hope to begin to enact change in their own lives, then with perseverance it can spread like wildfire. So far as a species we have failed to do that. But I believe we can, if we worry less about ourselves and those in power and start thinking more about the people around us. For my next 2,000 articles I commit to doing that. And I think in your daily lives, you should commit to spreading hope too.

We can be better and we must be. It’s up to all of us to make that happen.