Could sectarianism run so deep in the DUP that it will break up the UK? 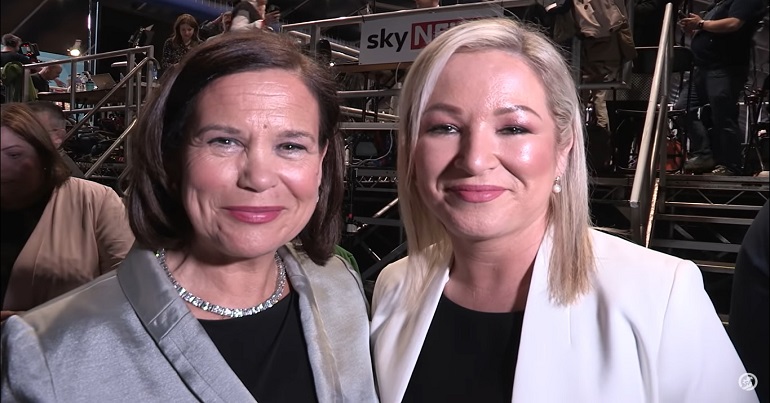 It’s both official and historic. Sinn Féin, under the leadership of Mary Lou McDonald and deputy leader Michelle O’Neill, is the largest political party in the North of Ireland. It won 27 of the Northern Ireland Assembly‘s 90 seats in the 5 May elections, as the British unionist DUP crashed to second place. O’Neill is now in line to be the North’s first minister. Sinn Féin also won the most first-preference votes. This is the first time any Irish republican political party has achieved this.

Whilst we try to work out what this result could mean for the North’s position within the UK, the DUP appears to be have its head in the sand. The system of government in the North is such that Irish republicans and British unionists must work together. However, the DUP refuses to commit to entering government with Sinn Féin despite the historic and democratic result. Its position isn’t at all surprising. Try as the DUP might to use the fallout from Brexit as an excuse for not entering government, its thinly veiled sectarianism is fooling nobody.

Was this the most important election?

DUP leader Jeffrey Donaldson billed this election the “most important in a generation”. Donaldson said he believed it would decide the future direction of the North of Ireland. He urged unionist voters to transfer their votes (the Assembly uses a Proportional Representation Single Transferable Vote system) to other unionist candidates. According to Donaldson, this would have helped to stop Sinn Féin from winning the election and thwarted its aim of holding a referendum on the North’s status within the UK.

Additionally, according to Donaldson, voting in this way would demonstrate unionist opposition to the Northern Ireland Protocol (NIP – the post Brexit agreement). Of course, Donaldson neglected to focus on the fact that the DUP was an ardent supporter of Brexit during and since the 2016 referendum.

The DUP, once again, pulled out of government in the North of Ireland in February this year, citing its opposition to the NIP. It said the NIP creates a border down the Irish Sea, thereby treating the North differently to other parts of the UK. As such, the DUP claimed that it won’t re-enter government until this is resolved. However, it’s also possible that it realised support for Sinn Féin was such that the DUP would be its junior partner in government. This would be unacceptable to a unionist mindset that’s used to having the upper hand in a statelet which has been anti-Catholic from its very foundation.

Donaldson’s plan to stop Sinn Féin failed miserably. Not only did the two main unionist parties not make gains, they in fact suffered losses. The DUP lost three seats, while the other mainstream unionist party, the UUP, lost one. The DUP’s first-preference vote dropped by almost 7%, while Sinn Féin’s increased by more than 1%. But Donaldson, in a way, may have got something right – the generation that voted in this election showed how unimportant the dominant DUP position is.

There can be little surprise at unionist reluctance to work with their republican neighbours as equals. Over the last few decades at least, they’ve made no secret of their feelings for their Irish Catholic and republican neighbours. From fostering suspicion to ensure that they couldn’t gain employment to comparing them to animals, there’s little doubt as to the real reason for the DUP not wanting to enter government.

But that’s on them. The electorate in the North has shown in this and indeed previous elections that they reject such sectarian politics.

The DUP hasn’t got the message

24 years on and the Good Friday Agreement (GFA) has not been the stepping stone towards a united Ireland that leading Irish republicans promised it would be. However, in all my years observing politics on this island, this is without doubt the first time I can remember people from outside Irish republican circles talking about the realistic possibility of a united Ireland. Even if the shape of a potential united Ireland is something that concerns me.

Regardless of its ineffectiveness for achieving a united Ireland, the DUP had nothing but contempt for the GFA. This is mainly because it means sharing power with its republican neighbours. Following the election result, Donaldson is still refusing to listen to the electorate, and he is instead engaging in ‘I told you so’. He appears oblivious to what has just happened to his party, and how a sectarian mindset has led it here.