Homophobia at an LGBT+ Conservative event? Colour me shocked - Canary 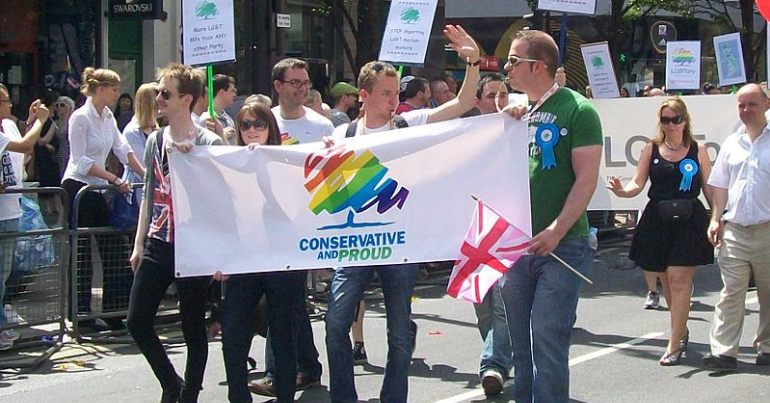 An LGBT+ Conservative party at the Reflex nightclub in Birmingham was disrupted by homophobic abuse. The event took place on the final night of the Tories’ annual conference. Anyone with a conference pass could attend.

Sources told ITV News that at least two individuals had to be removed for the use of derogatory, threatening, and deeply homophobic language directed at other partygoers. One victim reported that:

We kicked someone out who was blind drunk and called me a dirty l***** and that I needed to watch my back.

I don’t feel like I morally fit in anymore.

We have had discussions with LGBT+ Conservatives regarding this incident, which took place outside of the conference secure zone, and offered them our support.

If those involved are identified as members of the Party, we will launch swift investigations.

Any form of discrimination or abuse is wrong and complaints can be made in confidence under our Code of Conduct.

I must ask though, is anyone really that surprised at homophobia at a Tory conference? The Conservatives have a long and storied history of voting against gay interests. 136 of them voted against gay marriage, including Priti Patel, David Davies, and Kwasi Kwarteng. 30 Tory MPs tried to halt the fast-tracking of a bill to ban conversion therapy. More recently, Thérèse Coffey – whose voting record is strongly anti-gay rights – disregarded advice to procure extra vaccines against monkeypox.  It just so happens that monkeypox is thus-far disproportionately affecting gay and bisexual men.

On the opening day of the conference, the LGBT+ Conservatives shared an image of their badges:

yOu cAnT bE gAy aNd a ToRy pic.twitter.com/Oa5ZmyEll3

They used the caption “yOu cAnT bE gAy aNd a ToRy”. Though meant sarcastically, this obviously isn’t true. What is true, however, is that it takes someone willing to vote against their own interests to be LGBT+ and Tory. It takes someone who is willing to act as an ineffectual fig leaf for the party’s deep-running phobia. It takes someone willing to ignore a party that loathes them. This is a party that, at last year’s conference, just happened to put the LGBT+ Conservatives in section 28, recalling one of the most horrific acts of state hatred inflicted on queer people in the UK in modern times. The law known as Section 28 outlawed the promotion of homosexuality in schools and other institutions, and was only repealed in 2003 in England and Wales.

Homophobia on the rise

The news of homophobia at the LGBT+ Conservative party came just as the government released its official statistics on hate crime in the UK. The number of recorded homophobic hate crimes has increased by 41% since last year alone, rising from around 18,500 incidents to over 26,000. In turn, transphobic hate crimes have risen by 56%. This is a stark reminder of what any LGBT+ person living in the UK could already tell you: the UK is becoming a more openly hostile place for queer people to exist, day by day.

We all saw the naked transphobia that was on display during and after the Tory leadership contest. Of course, openly hating trans people was always going to be the thin end of the wedge. Truss and Sunak, in particular, targeted ‘woke’ issues (read, anything remotely progressive) more broadly, leading LGBT+ Tories to fear that their rights were being weaponised for electoral points scoring.

In an almost poetic illustration, the LGBT+ Conservatives tweeted an image of their pledge boards:

Thank you also to our patron and @Conservatives blond icon @Mike_Fabricant for coming and seeing us today. Thank you so much for your support. pic.twitter.com/TPwgorHp6K

We can see numerous signatures on the board proclaiming “I pledge to be an ally to the LGBT+ community”. Beneath it, we can also see a board with maybe four signatures in total. It reads “I pledge to support trans rights”. This is a clear demonstration of what should be obvious: a Tory will drop their support for marginalised genders as soon as it becomes politically expedient. Why would this not be the case for marginalised sexualities, too?

Every Tory MP is a member of a party which has never done more for LGBT+ individuals than they absolutely had to in order to maintain a thin veneer of tolerance. When the party says that it supports LGBT+ people, we know that the ‘T’ was always silent – why else would it invite the LGB Alliance to its events? As the mask slips, as homophobia becomes increasingly normalised, we will watch every one of those other letters fall silent in turn.