Julian Assange protest is ignored by the BBC and Guardian 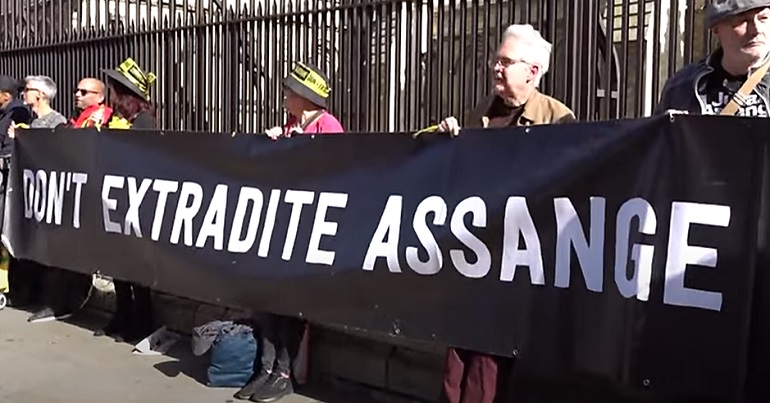 On Saturday 8 October, thousands of people converged on the area around the UK parliament. They came out to form a human chain to show solidarity with imprisoned journalist Julian Assange. However, there was a bitter hypocrisy at the heart of the protest. While the National Union of Journalists (NUJ) officially supported the action, the allegedly left-wing Guardian and our public service broadcaster the BBC failed to report on it.

A human chain for Assange

As the Morning Star reported, on 9 October:

Thousands of campaigners joined MPs over the weekend to form a human chain around Parliament and protest against the extradition of WikiLeaks founder Julian Assange. A chain of protesters snaked along Westminster Bridge on Saturday, along South Bank and back around Lambeth bridge completely surrounding the Houses of Parliament.

Assange’s wife Stella was at the demo and shared a video of it on Twitter:

As one Twitter user showed, the human chain was huge:

The International Federation of Journalists (IFJ) calls on journalists unions, press freedom organisations and journalists to mobilise and express their solidarity.

Journalists should have responded accordingly to this. Outlets like the Evening Standard, the Independent, Reuters and Sky News did report on the protest. However, the coverage was watered down at best, with an Independent journalist saying “hundreds” of people attended, and Reuters calling Assange an activist when it knows full well he’s a journalist and publisher. However, all these outlets did better than the Guardian and the BBC – they didn’t report on the human chain at all.

Guardian and BBC silence on the demo

The last time the Guardian reported on Assange’s case was 27 August. So, it seems odd that it would not cover the demo – and even more so when, in June, it published an editorial defending him against extradition. The BBC‘s coverage is worse – having not reported anything since 1 July. This is despite the NUJ as an organisation fully supporting the demo. The trade union’s members joined the human chain, and its general secretary Michelle Stanistreet previously supported Assange against state prosecution:

it is vital for the UK government to make clear that extradition and prosecution of Julian Assange for these charges would be a grievous blow to the media freedom it promises to champion.

As Jeremy Corbyn summed up at the protest:

If… Assange is extradited, it will set forth fear among other journalists of doing anything to expose truth. It becomes a self-censorship of journalists all around the world.

Yet still, the Guardian and BBC failed to report on the demo.

Assange: fighting for freedom for us all

Maybe our increasingly fascist Tory government has made Guardian and BBC bosses cower for fear of persecution. Or maybe bosses’ worldviews don’t really marry with those of their worker-journalists – a not-uncommon phenomenon. Either way, for the UK’s biggest media union to be at the protest, and then for two of the UK’s biggest media outlets not to report on it, seems off-balance.

In a video message, Stella said that Assange would be “energised and thankful for the support” that people at the human chain and beyond had showed him:

Julian Assange's wife Stella thanks protesters who surrounded the UK parliament on Saturday in a historic first: "Julian will be so energized and thankful for the support that you have shown for him" #SurroundParliament #FreeAssangeNOW @StellaMoris1 pic.twitter.com/ipRze5NMZ8

Sadly, we now know that Assange has tested positive for coronavirus (Covid-19) while languishing in Belmarsh prison. The least the Guardian and BBC could have done was report on the protest in support of him. Not only is Assange fighting for our freedoms, he’s fighting for those of the journalists at those outlets, too.