Starmer's EU stance is a clear indicator of his devious character 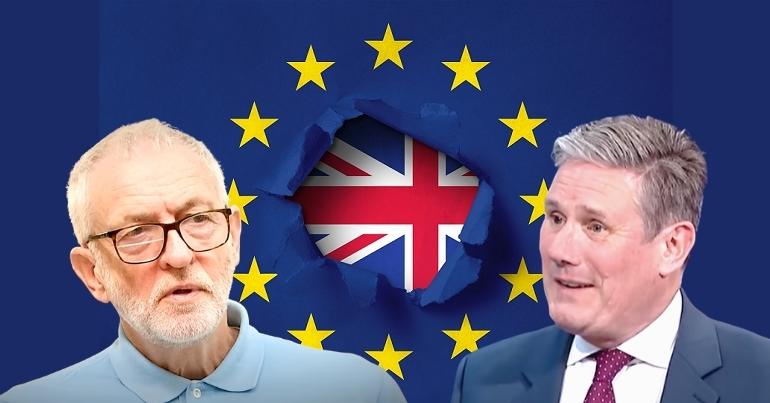 Keir Starmer’s hypocrisy knows no bounds, as demonstrated by an interview he gave recently. The Labour leader not only carried out a Tory-style break-neck U-turn but also exposed yet more betrayal of former leader Jeremy Corbyn. Moreover, Starmer continues to sell out left-wing Labour members down the river. This is because he just backtracked on a 2019 policy pledge that helped sink Labour at the last general election. It’s about Brexit – and it shows Starmer for the rank opportunist he is.

The second Brexit vote and Labour

In Labour’s 2019 manifesto, it committed to a second referendum on Brexit. The party stated that, firstly, it would scrap then-PM Boris Johnson’s deal. Next, Labour would negotiate another one with the EU. Finally, the party would:

put it to a legally binding referendum alongside the option of remaining in the EU. This will take place within the first six months of a Labour government.

However, this policy was flawed. As associate law professor at the London School of Economics (LSE) Michael Wilkinson wrote:

This was a historic mistake which led to defeat in the General Election… Labour should have respected the vote to Leave and offered a platform for change based on a future outside of the European Union.

But it didn’t, and we know why. As Wilkinson wrote, Corbyn capitulated to remainers in his own party and pressure groups in an attempt to please everyone. This was disastrous, losing Labour’s so-called ‘Red Wall’ seats to the Tories, and losing voters elsewhere. Of course, one of the people behind the campaign to force Corbyn into a second referendum pledge was Starmer.

The evidence is there that Starmer was central to the second vote policy. As the Guardian wrote:

Starmer felt so strongly about the Brexit referendum result in June 2016 that he quit as a junior shadow minister under Jeremy Corbyn. A few months later he returned to the Labour frontbench as shadow Brexit secretary and spent the next four years campaigning to mitigate the result, which he described as “catastrophic”, while at the same time retaining voters in “red wall” constituencies. But he was a remainer. He campaigned against a no-deal Brexit and for a second referendum to give the people a “confirmatory vote” on any deal with Brussels.

Starmer was also one of the early proponents of a second referendum. He defied Corbyn’s position of ‘no second vote’ in 2018, going on the record as saying:

We respect the result of the first referendum. But we’re not ruling out a second referendum.

Then, as iNews wrote:

Don’t forget that in 2018 he won his first roar from a Labour conference, when he thundered “nobody is ruling out Remain as an option!”

Central to the defeat

Starmer was his party’s shadow Brexit secretary. And it’s worth recalling that in the long “Brexit wars” from 2016 to 2019, he was not a mere observer but a very active participant. During private talks between Theresa May’s government and Corbyn’s team to try and find a compromise Brexit deal that could get through the hung parliament, her former chief of staff Gavin Barwell claimed in his memoir: “Starmer was not prepared to settle for anything that didn’t include a confirmatory vote.”

So, the now-Labour leader played a fairly sizeable part in the undoing of the former one. However, Starmer is also a stinking hypocrite.

A hypocrite and a snake

On Monday 24 October, LBC was interviewing Starmer. In short, after a caller asked him if Labour would “reverse Brexit”, Starmer said:

It’s a straight no from me! We’re not going back into the EU. We do think that we should make Brexit work.

This is shutting the stable door after the horse has bolted. Opinion polls now say the majority of people want to rejoin the EU, and the economic impact of Brexit under the Tories has become clear. Starmer saying we won’t rejoin now is a clear indication of his courting of Tory voters – but this is too little, too late. If he had pushed this position in 2019, Labour may have forced a hung parliament, and the past three years would have been a very different story.

But Starmer didn’t. Given the lies he told during his leadership campaign around his ‘ten pledges’, it is likely that he knew the second vote position would kill Corbyn’s Labour. This would clear the way for his leadership bid – in which he could proclaim a wish to continue a “radical socialist tradition” while keeping his fingers crossed behind his back.

Starmer’s position on Brexit has all been about his career. He cannot be trusted to run Labour, let alone potentially lead a UK government. Due to his Brexit position, he condemned the rest of us to the hellscape that has been the past three years – he should be nowhere near power.