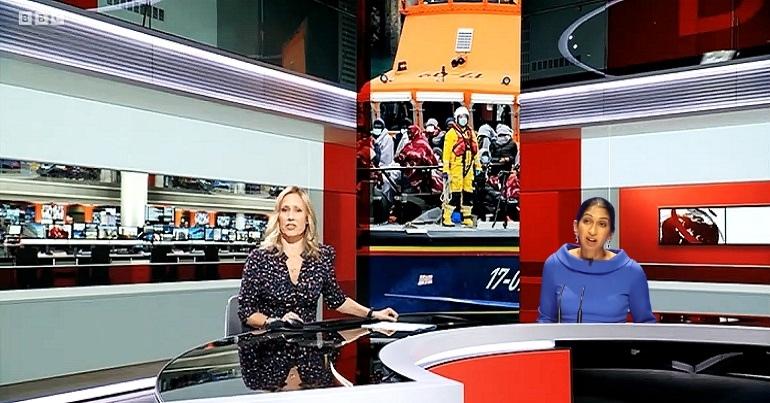 Clearly the BBC shares a similar dream to first-sacked, now-back home secretary Suella Braverman: demonising refugees and deporting them to Rwanda. Or rather, you’d think that was the BBC‘s goal if you saw the hideous and frankly immoral segment on its News at Six on Wednesday 26 October.

BBC News was reporting on the number of refugees that had crossed the Channel this year. Host Sophie Raworth noted that:

The normal response to this news should be fear and sorrow for the brave people risking their lives in one of the world’s busiest waterways. However, this was not on BBC News‘s agenda. Instead, the segment generally focused on the economic and social impact of refugees. And it was straight out of right-wing politicians like Braverman’s playbook.

Reporter Mark Easton set the BBC stall out from the off. Amid images of the Royal National Lifeboat Institution (RNLI) pulling near-drowning refugees out of the water, he commented that these were:

Distressing images illustrating the challenge posed by record numbers of migrants trying to reach the Kent coast in flimsy boats.

Never mind that these people could have died. It’s a “challenge” – the implication being for those having to deal with the situation, not the refugees themselves. Easton and the BBC then hammered home the point that 10,000 of the people who crossed were “single men” from Albania. ‘They aren’t refugees!’ you can almost hear the gammon squealing. No – they’re desperate humans, exploited by gangs which have taken thousands of Euros from them, only to potentially send them to their death or a UK prison camp. However Easton still dropped in the tired, right-wing trope that somehow these people are ‘illegals’ – when under international law no migrant, immigrant or refugee is ever illegal when they first enter a country to claim asylum.

If the idea of single men coming over here illegally wasn’t enough to send Middle England’s blood pressure rocketing, then the BBC knew what would give it a coronary: these people are costing YOU, the hard-working taxpayer, money! Easton claimed that:

Many migrants are being housed in hotels like this one in Scarborough. The cost? Almost £7m a day.

‘Fucking immigrants! Living it up in our hotels! Costing us £7m!’ would be the cry from Middle England. But as Scarborough News reported, the government dumps refugees – often those fleeing the Taliban in Afghanistan – there:

with no facilities, no buses, nowhere to go.

But if £7m a day has boiled your piss – wait until you hear what everyone’s favourite right-wing girlboss Liz Truss pissed away with her mini-budget. She managed to wipe around £10bn a day off the UK economy after the announcement. So actually, refugees are costing us 0.07% of Truss’s clusterfuck and just 0.00003% of the UK’s gross domestic product (our overall wealth) in 2021.

To be fair on the BBC, it did show evidence given by the independent chief inspector of borders and immigration to a parliamentary committee. He called the conditions in one refugee camp “pretty wretched”. However, Easton couldn’t help but frame this as the inspector had written to “warn” the home secretary of the “dangerous” conditions there. This implies that Braverman and the government didn’t know of the situation, which is unlikely. This is because the media started to report on it over a month ago, and historically governments have always managed refugee centres like prison camps – the appalling Yarl’s Wood centre being a case in point.

But this is the BBC – and in the face of an increasingly authoritarian government it has to play by the rules. So, not one refugee was interviewed in the segment, nor were any advocacy groups or charities spoken to. Instead, it was little more than a piece of right-wing propaganda, dressed up as public service broadcasting.

Of course, the only service the BBC is performing is to Braverman and the government – not the 150 plus people who have died in the past five years trying to get to the UK. When we have a state broadcaster as cold, heartless and cynical as the BBC, it’s little wonder the public keep electing politicians with those exact same characteristics.

Featured image via BBC iPlayer – screengrab and the Guardian – YouTube