Brown deceived Scotland with the Vow, and he's doing it again 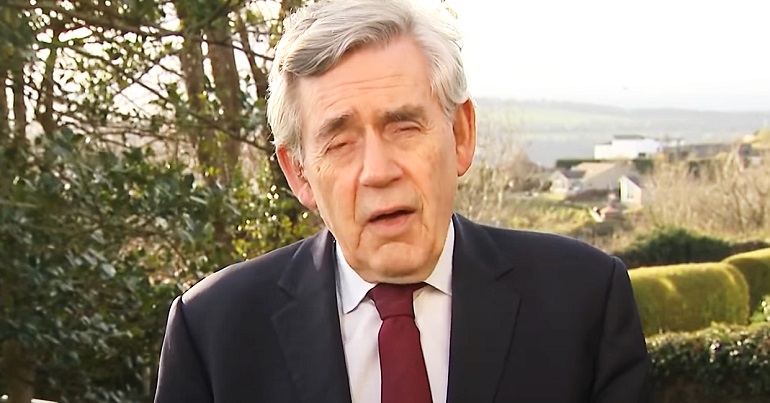 Like a bad smell, Gordon Brown is back again, desperately trying to keep Scotland in the stinking United Kingdom. The problem is, not everyone has short memories – and a video montage of the former PM’s comments surrounding independence and federalism gives reason enough for people not to trust Labour or Brown ever again.

As reader L. McGregor wrote in the Herald‘s letters page, the “Vow” was a last-minute pledge by unionists during the 2014 Scottish independence referendum. It was an attempt to sway the vote towards remaining part of the UK. McGregor noted:

All three unionist party leaders in 2014 swore to implement the Vow, devised by Gordon Brown, promising the nearest thing to Home Rule, guaranteed membership of the EU, 13 frigates starting to be built on the Clyde within a year, Holyrood’s status made legally inviolate in perpetuity, the Sewell Convention made law and more.

Of course, a lot of this never actually happened. McGregor said:

What did we get? On September 19, 2014, English Votes for English Laws, and since then Holyrood has been overruled several times, even taken to court to overturn the signing of a UN charter, we are out of the EU, the power to dissolve Holyrood still rests with Westminster, and Sewell is only a custom “normally” observed.

Now, with the SNP sticking to its guns over the next general election being a de facto independence vote, unionists have rolled out the ‘Broon‘ – as he’s known – once more to try to con the Scottish public again.

Rolling out the Broon

Broon has delivered what some people are calling the ‘Vow 2’:

The Vow 2.0
The original Vow has proved to be unionist lies and fiction.
Nothing will change from Brown. pic.twitter.com/im3WIYeeyH

Like some two-bit, zero-budget B-movie sequel, Broon and the Labour unionists have once again been bandying around things like “extra powers” for Scotland, as part of the party’s plans for constitutional reform. As the Herald reported, Labour’s offering for Scotland includes:

scrapping the House of Lords, and replacing it with an Assembly Of The Regions And Nations, with an “enhanced Scottish representation” and a “constitutional role to protect the devolution settlement.” It also calls for “devolution within Scotland” with new directly elected mayors or provosts for Scotland’s major cities.

Aren’t Scottish people lucky? Except they’re unlikely to fall for it again. This is not least because Broon had previously let slip that he seemed to realise the last Vow was actually a con.

The art of deception

Filmmakers Phantom Power put together a clip of all the times Broon claimed that the Vow was a kind-of federalism – and then the times when he said federalism wouldn’t work. A Sky News presenter previously challenged him over the fact that Broon previously said:

‘we’re going to be, within a year or two, as close to a federalist state as you can be’

The host said people felt like Broon and the unionists “deceived” them. In response, the former PM admitted:

look at the small print.

‘Federalism doesn’t suit the UK’ Gordon Brown admits a federal UK with Home Rule for Scotland is impossible. Brown deceived the Scottish people to damage the Yes campaign lead during the final week of the 2014 independence referendum with an offer he knew couldn’t be delivered. pic.twitter.com/CspYlKahMZ

As people on Twitter were pointing out, on this basis why would Scotland trust Broon and Labour unionists again?

"look at the small print" that conceding you deceived straight away

So, with the “yes” to Scottish independence vote currently leading in the polls, and Broon proven to be at best deceptive, many people are unlikely to fall for ‘Liebour’ and its flaccid attempts at devolution again. Scottish people seem to want independence or bust – and at this rate, with Broon at the helm of the yoon campaign, it may well be independence eventually.