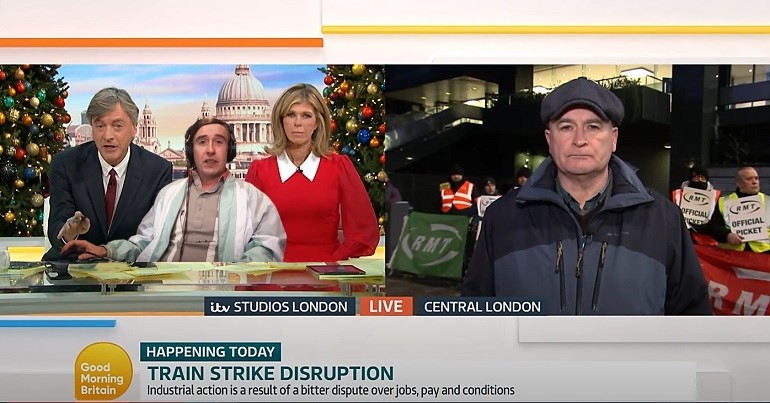 Good Morning Britain (GMB) host Richard Madeley managed to unite much of social media against him on Tuesday 13 December. It came after the archaic TV presenter ‘interviewed’ (if you can call it that) National Union of Rail, Transport and Maritime Workers (RMT) general secretary Mick Lynch. The segment on GMB was such a disaster that some viewers thought comic character Alan Partridge had invaded their screens.

RMT members were out on strike on 13 December. It was part of a series of walkouts after the union rejected a pay offer by Network Rail that was well below the rate of inflation. The RMT is taking action on:

Of course, the action over Christmas won’t directly affect passengers because few trains run on Christmas Day and Boxing Day. This hasn’t stopped the corporate media fueling anti-strike sentiment, though – with the BBC pushing fake stories about the RMT disrupting people’s Christmas plans, and the Guardian using its best divide-and-conquer tactics to foment disquiet. So, to continue this trend, enter Madeley on GMB – doing his best Jeremy Paxman impression, but ending up looking more like Alan Partridge.

Madeley was tasked with interviewing Lynch – no mean feat to be fair, given the RMT head’s reputation for making corporate journalists soil themselves. However, the GMB host clearly believed he’d had his Weetabix on 13 December – it’s just that no-one else thought so.

The former This Morning presenter put it to Lynch that “many people” were:

appalled that you are striking over Christmas, over this Christmas week.

This seemed to be in reference to the RMT’s 24-27 December strikes. Madeley asked why the union couldn’t have taken strike action in January. Lynch began to answer by saying:

Well, we’re not targeting Christmas. It isn’t Christmas yet, Richard. I don’t know when your Christmas starts, but mine starts on Christmas Eve.

The GMB host then lost it. He accused Lynch of being “disingenuous”, saying “commercial Christmas starts in December”. Madeley continued to labour this point – despite it not being what he originally said in his question. Lynch attempted to answer, but Madeley continued his rant, saying:

Of course, what Madeley is actually talking about is not your Christmas or mine – one that, given the catastrophic cost of living crisis, is likely to be a miserable affair. The GMB host is talking about business owners (the same class of people denying RMT members a proper pay rise) and the middle and upper classes – for whom December is all about spending. You’d be forgiven for struggling to pick up that point from Madeley’s incoherent waffle, though – as Lynch asked:

Richard, why don’t you just interview yourself

So, narcissist Madeley channeled the best bit of script from the 1980s Ladybird Book of Journalism:

I’m holding you to account on behalf of the viewers

You could almost feel his ego swell as he thought he’d duped the audience into believing he was something other than a washed-up, right-wing hack from a bygone era:

'Will you answer the question Mr Lynch, I won't let you get away with nonsense'@richardm56 grills the General Secretary of the RMT, Mick Lynch over striking over the Christmas period pic.twitter.com/htcqFREQM9

Sadly for Madeley, most people weren’t fooled by his piece of am-dram performance art:

This was not a grilling bbz, this was a madman ranting about when Christmas “starts” lol https://t.co/EbK9aMHEOm

Mick Lynch, at the end of this bizarre exchange, finally gets to explain he was in the middle of giving a perfectly rational answer to the question posed by Madley when he was interrupted with an agressive rant demanding he answer the question he was already answering. TV gold 😂 https://t.co/3jueEdqZ67

It was more @AccidentalP than a grilling! He didn’t allow Mick to answer.. When he did answer Richard Partridge had no follow up as Mick washed the floor with him! #GMB #AccidentalPartridge https://t.co/l6LcpyAosu pic.twitter.com/2HjFTsN8VB

Madeley looked and sounded like a dickhead. Of course, the broader point here is that that’s exactly what GMB bosses want. The host acting like a clusterfucking TV character is a ratings win for ITV. It’s hopefully a win for the RMT too – as Lynch came across like the rational one to Madeley’s Partridge. ‘Back of the net’, you might say.