Scaremongering around drag is clearly an American far-right import 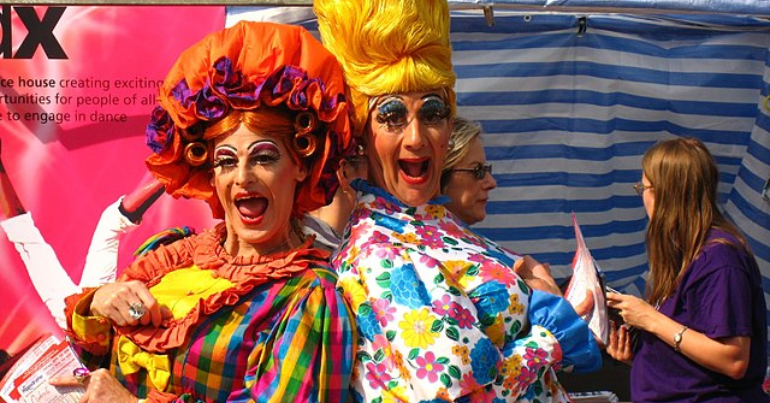 The moral panic around drag queens currently sweeping America has arrived in Britain. Conservative and homo/transphobic reactionaries are working themselves into a froth around the idea of (usually, not necessarily) a man in a dress entertaining children. The problem? It makes zero sense in a country with a proud tradition of… a man in a dress entertaining children. Of course, there’s no way a bigot would let a little cognitive dissonance stop them.

The US is currently getting itself all het up about drag acts. Sometimes, the opposition is supposed to be specifically against children watching drag. Often, it’s simply about the idea of drag, full stop. Whatever the focus, it’s part of a much broader assault on the existence and rights of all LGBTQ+ people in America and elsewhere.

The effects of the anti-drag movement have been wide-ranging. In Texas, legislator Bryan Slaton made moves to introduce legislation barring children from watching drag. Florida’s governor, Ron DeSantis, suggested that child protective services should be called on parents who allow children to attend a drag show. Meanwhile, in Canada, libraries were threatened simply for hosting drag queen storytellers.

However, the bigotry has by no means been confined to the idea of minors seeing drag. Individuals carrying Nazi banners gathered at a fundraiser for the non-profit Rose Dynasty, run by drag queen Momma Ashley Rose.  A donut shop in Oklahoma was firebombed after it hosted a drag-themed event. More recently, five people were killed in an attack on Club Q, Colorado, which was hosting a drag event. Since then, the attempts at intimidation have only intensified.

A study by Gay and Lesbian Alliance Against Defamation (GLAAD) stated that the US had seen:

Reporting on the GLAAD study, Them noted that the attacks came:

after encouragement from Republican politicians, far-right pundits, or social media feeds like Libs of TikTok, who have increasingly labeled transgender people and drag queens as “groomers” who are dangers to children.

Panic in the UK

With a depressing inevitability, the moral panic around drag has made its way to Britain. The Canary has previously reported on the fascist organisation Patriotic Alternative protesting outside a drag event in Cornwall. A homophobic mob have attempted to arrest a queen performing at a library in Reading. Multiple threads on the reactionary parenting site Mumsnet are calling for an end to drag events for young audiences.

Drag Queen Story Hour UK wants to show the world that being different is not a bad thing, and by providing imaginative role models for children to look up to, we can change the world book by book!

The events aim to increase the acceptance of LGBTQ+ identities in the next generation – and to prevent the perpetuation of exactly the kind of bigotry that is directed at them.

As we gear up for Christmas, it’s high time to remember that the UK historically has been fine with the idea of men wearing dresses, big makeup, and wigs as children’s entertainment. In fact, we’ve built a whole bloody tradition around it. Oh yes we have!

The origins of the pantomime tradition are murky, but it seems to stem from the much older c16th Italian Commedia dell’arte performances. The use of stock characters and elaborate costumes grew into a form of Victorian theatre. It’s use of stage magic, quick changes and trap doors delighted British audiences. In particular, the over-egged, melodramatic plots proved popular with working-class patrons.

Today, children and families still crowd out theatres to join in with the traditional Christmas pantomime. And, as part of that, they’ll see the pantomime dame – usually played by a man wearing over-the-top makeup and feminine garb. The dame provides comic relief, and is arguably the most recognisable aspect of the panto. She’s also often played by a well-known celebrity – this year, Ian McKellen is taking to the stage as the titular Mother Goose.

So what’s the difference?

Absolutely not! If that was the difference, it would mean that this whole moral panic is just a hastily repackaged homophobia. It even plays on exactly the same hateful tropes as every other moral panic around gayness. Like Section 28 before it, it is rooted in the fear that if children are shown that it is OK to be queer, they might grow to accept the queer people living in the world around them.

But that couldn’t be it, right? Not a clumsy import from the American far right that makes absolutely no sense in the cultural context of the UK, no sir. But if you can think of a better difference between the drag queen and the dame, I’m all ears.