A singer-songwriter's new mixtape is a revelation - The Canary 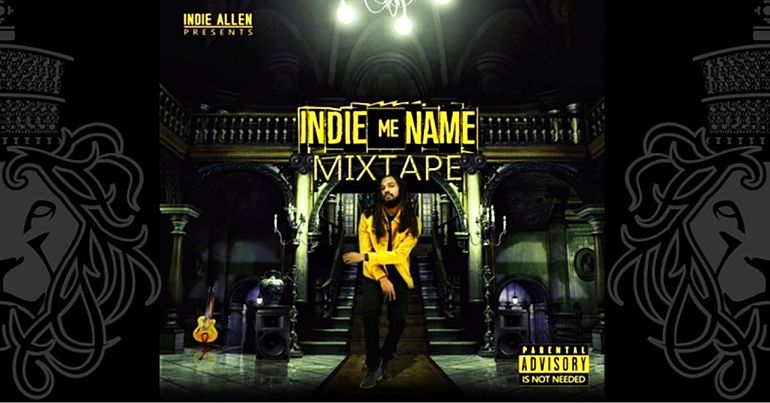 A singer-songwriter has just released his new mixtape. Far from being a collection of songs in a specific genre, the record showcases the artist’s full range of styles. But moreover, he’s created a project which is arguably a stroke of genius.

Indie Allen hails from Montego Bay in Jamaica. Having appeared on Jamaican talent show Digicel Rising Stars, he trained at the Edna Manley College of the Visual and Performing Arts. After making various moves, he released his debut EP Indie Moment in 2016. Success followed, with the 2018 track Catch a Fire cementing his status as a name to watch. Now, he’s just released his first mixtape. Called Indie Me Name, it showcases Allen’s musical diversity and talent. But it also proves that he’s not an artist you can put in a box.

So I caught up with Allen for the Topple Uncaged podcast. We discussed Indie Me Name, his influences, conscious music and what 2019 may hold for this multi-talented artist. You can listen to the full interview below:

A mixtape is traditionally a collection of songs by various artists, But in more recent years they’ve evolved into vehicles for artists to introduce their music to fans, or to release tracks for free.

Musically, Indie Me Name is a deliciously eclectic affair. It swings from the folksy, acoustic-sounding The Come Up to the modern, RnB-led Loyal via trap/drill in Watch This Freestyle. It also makes persistent nods to roots, dub and soul. Overall, the mixtape fully showcases Allen’s abilities not only as a vocalist but also a skilled songwriter.

Take Father’s Day, a rousing move from Allen. The track is inspired by his relationship and love for his own father and his admiration for his brother, also a dad. It discusses how he hopes to be as a father and also what all men should aspire to. But Allen has backdropped this narrative with a bang up-to-date afrobeat RnB track. Putting a poignant message on an urban track is inspired.

Contrasting Father’s Day are tracks like Suga Daddy. You’d be forgiven for thinking Madness had suddenly rocked up on Allen’s album. Because the song is a distinct nod to the ska subgenre of reggae. The double-time bass guitar, punctuated with a synth bass on the offbeat, and the persistent, stomping bubble pattern piano instantly let the listener know just where Suga Daddy is at. Jazz horns take you to New Orleans while clipped, Calypso-like backing vocals send you to the Caribbean. Combined with Allen’s attitude-laced vocals, you’ve got a 2019 reimagining of 20th-century ska.

But it’s the soul, RnB and urban tracks which possibly showcase Allen’s vocal ability the best. For example, Herbalist swerves between being a modern, smooth RnB track and a sultry dancehall banger. But this is secondary to Allen’s vocals. They glide then groan effortlessly between a soaring, Maxwell-like falsetto and a rich, provocative tenor. He then slides into a winding singjay (a Jamaican mix of singing and rapping), finishing off this masterclass in vocal dexterity.

The one and only frustrating part of Indie Me Name is the track Kings and Queens. Don’t worry. It’s not frustrating in a bad way, because the song is gorgeous. The sounds of a storm menacingly rattle behind a piano and acoustic and bass guitars. This sparseness leaves room for Allen to display one of his best vocal performances on the mixtape. Rich yet perfectly measured, Allen shows the right amount of restraint, letting his voice carry itself with grace. The frustrating part? It’s less than two minutes long, leaving you wanting to hear the complete work.

But despite this musical and vocal ingenuity, it’s the mixtape’s narrative and messages which truly stand out.

Martin Luther had a dream…

Dreams opens Indie Me Name and serves as a fitting start for Allen’s story and the message behind the whole project. It’s a distinctly dub affair. Allen’s echoing, staccato vocals are set against a backdrop of off-then-on-key horns, a regimental piano trotting out the bubble pattern and swiping synths. But the message behind Dreams sets the tone for the rest of Indie Me Name. Allen talks about how everyone should have a dream. As he notes in the track:

Martin Luther had a dream;

Marcus Garvey had a dream;

Bob Marley had a dream…

This is the point. Because Allen is telling the listener that it’s OK to have dreams and aspirations. But if you do, they need to be spiritually and consciously sound; being a force for good. He also issues a warning for those that entertain the perils of the system.

The truth is tragic,

So the minstrels entertain us;

Distract you with the lifestyle

They choose as entertainers…

I never, ever want to end up like those guys,

Who chant down duty Babylon

And use Selassie I

To make a profit.

So don’t you believe the hype;

The branches do break

The higher the monkey climbs…

What’s also apparent from Dreams is that Allen is setting out how his own journey started. So it perfectly launches the narrative of the whole voyage that he maps out in Indie Me Name.

The deepest of voyages

The mixtape’s messages and themes mostly centre around Allen’s own experiences of following the path to becoming a musician. The Come Up, perhaps the stand out track of Indie Me Name, sees him emotively chart how he got to the point of releasing a mixtape. It’s a moving experience, enhanced by the stripped back, acoustic feel. As track number two, it follows on perfectly from Dreams. Track number three then takes the emerging story to its next chapter, with Everything Takes Money. Allen discusses the noxious nature of capitalism, with hints at the issues of this within the music industry.

Then, from Father’s Day onward Allen discusses relationships, love and loss. You can feel he has charted his journey to find spiritual love via tracks like Loyal and Sweeter. The latter sees Allen using his airy falsetto throughout. It turns what is a dub-like track into more of a modern neo-soul affair.

The West is the mixtape’s penultimate track. It’s a searing narrative on what life is like in his hometown of Montego Bay: violence, poverty and corruption of the state and its arms. You sense Allen has placed this track near the end as a stark reminder that despite dreams, success and love, the often horrific reality of life in the system we live under is never too far away. The track is made all the more poignant because his cousin was shot there recently. He appears on the interlude First Call, which plays after The West, to discuss this.

But The West also serves as an analogy for life under capitalism around the world. Finally, Allen juxtaposes this misery by bringing Indie Me Name full circle to its last track, The Prayer. A rich, delicate ode to his spiritual father, it again shows Allen’s ability to produce a restrained yet powerful vocal. But moreover, it completes the story he tells throughout the record, showing that in spite of everything, none of it for him, from his Dreams to surviving in The West, would be possible without his faith.

It’s this complete picture which perhaps sums up the mixtape.

Allen has struck a perfect, intricate balance with Indie Me Name. Musically diverse, it gives dazzling glimpses into his songwriting abilities and eclectic mind. Vocally sublime, the mixtape effortlessly showcases his soaring yet delicate timbre, impressive range and dexterity. Lyrically and soulfully profound, Allen has woven together the sum of his experiences and presented them to the listener as a wholly accessible yet transfixing package.

But Indie Me Name is more than that. It is a genius move on Allen’s part. Because in its final flourish, The Prayer, he hints at what’s to come. Lulling the listener into a false sense of glorious security, he has teased you musically and spiritually, probably without you even realising. Because Indie Me Name is merely the introduction to this artist’s extraordinary ability, with an album set to drop in the near future. It’s a taster, even though it feels like his seminal work. So, if the best is yet to come, Allen is headed for truly remarkable heights.