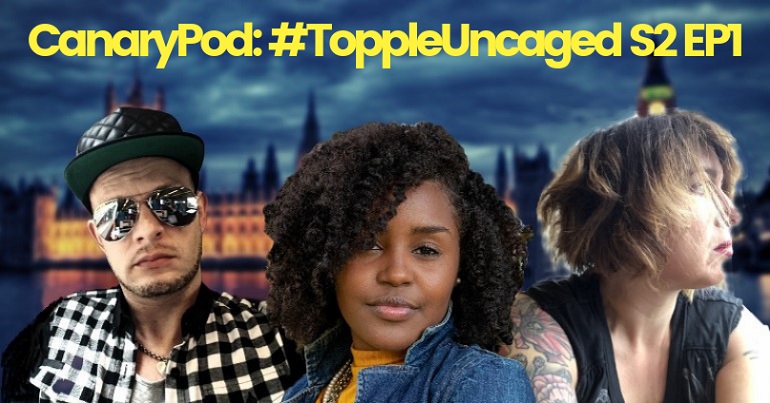 THIS PODCAST CONTAINS LANGUAGE AND CONTENT SOME PEOPLE MAY FIND OFFENSIVE

The Mayor of London : We Call For the Immediate Suspension Of Romford Based, Met PC Kevin Rawley Immediately . – Sign the Petition! https://t.co/6DaldOG4k0 via @UKChange

Petition: we the community Lewisham Borough

@Snowbombing YOU PROCKS.!!! got caught trying to cover up your racism pic.twitter.com/It5BNChvhs

Turkey articles from The Canary

Kurdish people protesting in and in front of @amnesty buildings have been subjected to disproportionate police interference for days. Hypocrisy at its finest! pic.twitter.com/YPauPokSaA

Kurdish activists are asking people to contact their local MPs to draw attention to the hunger strikers and the isolation of Abdullah Öcalan.

Get involved with your local Kurdistan Solidarity group

Instead – join in Twitter Chirps Back 🐤 on my weekly #podcast – #ToppleUncaged

YOU to tell ME what YOUR views on the biggest stories are#JillDando? #WCAdebate? #Brexit? 😱

REPLY TO THIS TWEET & I'LL READ THE BEST OUT ON SUNDAY ⬇️ pic.twitter.com/tBXRv1HxMk

Without Me by Eminem via Benjie Espleguera