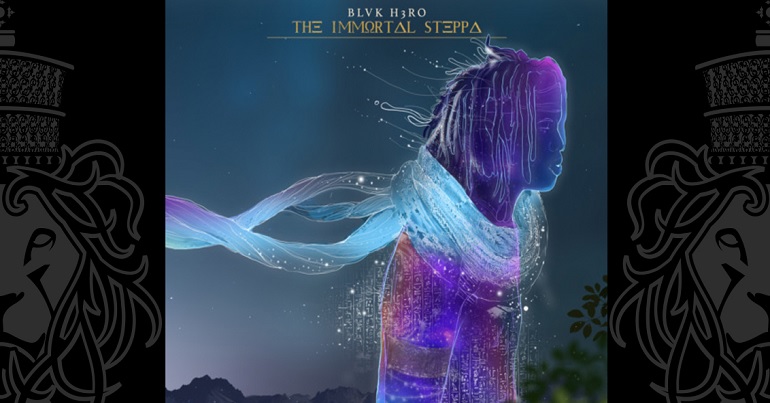 A Jamaican artist’s debut album has taken the rule book for the reggae genre and smashed it to bits. In doing so, this ‘hero’ has created one of the most musically experimental releases of the year. The end result is a triumph, with echoes of Prince at his finest.

Blvk H3ro hails from Waterford, Jamaica. His musical grounding began early on in his life. Aged eight, he was playing the drums. By 13, he was singing in his local church choir and performing on stage at school. Then, in 2012, he started his journey as a recording artist, collaborating with other musicians and releasing several singles. He dropped his debut EP, THC: The Herb Connoisseur, in 2017 which propelled him firmly into the mainframe of the roots reggae/Revival movement. But now he’s back with his first full album. So, I caught up with Blvk H3ro for the #ToppleUncaged podcast. We discussed his influences, the system, his faith, Africa and of course the new album, The Immortal Steppa.

Listen to the full interview below:

The Immortal Steppa as a debut album is an extremely bold move by Blvk H3ro. It sweeps across numerous genres: reggae, ska, funk, neo-soul, trap/drill, afrobeat, hip-hop – and some of Blvk H3ro’s own creation. But his boldness has thoroughly paid off, as it’s a work of pure delight.

No fail in sight

It opens with the almost introspective Feet Don’t Fail. The track is about maintaining faith in what you believe in and holding firm on the path you’re treading. Lyrically it’s a fitting opening for the album. But musically, it sums up the whole project. Because it’s really difficult to pin down just what Blvk H3ro has created.

While at first glance it appears to be a reggae track with some ska influences, scratch the surface and it’s far from this. The bubble pattern, where an instrument plays off the beat, is a key device in reggae music. But on Feet Don’t Fail, Blvk H3ro uses it sparingly via keys and horns. But at times Blvk H3ro drops the bubble pattern entirely. The hip-hop kick, snare and cymbal/hi-hat drum combo take Feet Don’t Fail away from reggae into rawer territory. The bass guitar does a fairly consistent RnB ‘lick’ (a repeated melody, rhythm or both) throughout. The whole package is an ingenious hybrid of musical styles:

Feet Don’t Fail‘s blurring of musical boundaries is a running theme during The Immortal Steppa. For example, Africa is a constant influence throughout the album. Movin’ On features the distinctive djembe frantically pattering in the background. What sounds like a kora earnestly strums away. The almost completely percussive track has no key changes, while Blvk H3ro uses complex vocal rhythms across mostly one or two notes in the verses. Finally, a bass guitar plays completely off key – adding to the whole African vibe.

He then takes us back to the 70s with the funk/soul-induced Herb. A sweeping, musically complex track, the bass guitar is back with another, more prominent walking lick. A forceful horn section matches a funky, bluesy electric guitar. Claps on the offbeat bring an air of gospel to the whole, funky affair.

Blvk H3ro then massages your ears with some beautifully scored neo-soul of his own making. Mama, a gorgeous ballad, and the soul/Latin/reggae fusion Can I (Show Ya) are both top quality in terms of arrangement and production, the latter being especially impressive. What also shines on these and every other track are his soaring vocal skills.

Blvk H3ro cannot be boxed in as a singer. He effortlessly glides between a high bass, a soaring tenor and a powerful yet delicate falsetto. He is as skilled as a rapper as he is as a singer and does some mean singjay (a mix of singing and MCing) as well. But it’s his interpretation of both the music and lyrics which really stand out.

On many tracks, he sublimely flips between tight-lipped (horizontal) vocals to an almost booming, open-mouthed (vertical) style. It ups the passion in his delivery well. As with the music, vocally Blvk H3ro displays elements of a multitude of genres. From his RnB-like rhythmically intricate vocals on Can I (Show Ya) to his neo-soul, Maxwell-like use of the falsetto on Skydive via some banging reggae singjay on Watch Yuh Step.

His cover of Stevie Wonder’s Superstition is a masterclass in vocal performance:

Blvk H3ro has also created a politically, socially and spiritually conscious album. He deals with a multitude of issues, ranging from spiralling poverty and deprivation in Jamaica to the failings of the system, via classism and the legalisation of cannabis. You can hear us discuss all this on the #ToppleUncaged podcast.

His own, personal stamp

Back to the music, and he also doesn’t miss the opportunity to bring his own, scintillating style to some more on-trend genres.

Take M.A.R.Y. What Blvk H3ro has done is ingenious. He’s flipped the Toronto hip-hop/RnB sound, which is characterised by ambient vibes, heavy use of synths and all mashed with trap/drill BPM (beats per minute). Synth strings wash around the arrangement, changing pitch at every second bar which creates a sense of seductive flow. The snare taps on the third beat, making the track seem half the tempo it actually is. The pulsating, slightly gritty synth bass lulls across bars, nodding subtly at dancehall. But this is all contrasted with rapid fire vocals on the verses, and chattering, agitated percussion in the background. Who needs Drake, when you’ve got Blvk H3ro?

He also puts his own, somewhat oriental stamp on the current sound of afrobeat RnB in the exquisite Blvk Peppa. But he does it with much more intelligence than the corporate radio-friendly, factory farmed records we hear in the UK.  Blvk H3ro delves into trap/drill but with an RnB twist on Get High and even brings the Timbaland style of 90s RnB kicking and screaming into 2019 with My Love.

But The Immortal Steppa is at its most engaging when Blvk H3ro breaks all the boundaries and produces something unique.

We On is the perfect example of this synth-heavy, futuristic sound he and his team have created. It opens with electric guitars played with the brightness and reverb turned up, which creates a rasping effect. Then an unexpected trap/drill bass swoops in, off-key, along with rattling hi-hats and crashing cymbals. A kick drum slows the track, thumping on the third and 4½ beat. The whole experience is almost otherworldly – insomuch it’s a beautiful vision of where Blvk H3ro’s music could be heading:

Overall, it is perhaps this track which showcases best his exceptional talents as a musician.

Power to the new generation

I’m always loathed to make direct comparisons. But in this instance, it’s warranted. Because when The Immortal Steppa is viewed as a sum of its parts, it sends you back to Prince at his inspired best with the Purple Rain album. While it only hinted at the late artist’s musical experimentation that was to follow, it showed great diversity and innovation for its time. And this is exactly what Blvk H3ro has done with The Immortal Steppa.

It is a perfectly pitched introduction to the almost precocious talents of this man. He has cleverly crafted a project that while nodding to both historical and current genres, has swathes of pioneering approaches to writing, arrangement and production on each track. Putting him in the realms of his groundbreaking contemporaries King MAS, Protoje and Kabaka Pyramid, The Immortal Steppa has cemented Blvk H3ro’s status as one of the trailblazers of the roots/Revival movement.

All other tracks via Blvk H3ro.