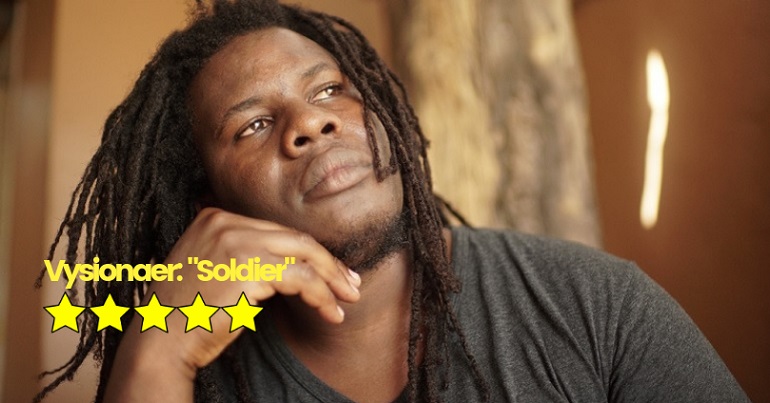 A Jamaican artist has just dropped his debut EP. In doing so, he has presented the world with a ‘vision’ of both his music and his philosophy on life and the world. The result? It’s gorgeous.

Vysionaer (pronounced “Visioneer”) is from the Roses Valley area of Jamaica. After releasing tracks for over six years, in early 2018 he began working on his debut EP – in conjunction with legendary reggae producer Anthony Senior, via his label Al. Ta. Fa. An. Finally released in May, the EP is called Soldier and features five tracks.

So, I spoke with Vysionaer for the #ToppleUncaged podcast. We discussed the EP, his journey to this point, working with Senior and how the current roots reggae Revival movement is shaping up.

Soldier is a perfectly formed introduction to Vysionaer. It sets out the artist’s musical and lyrical grounding, taking on a distinctly roots-reggae form. But what he and Senior have done is created something far more delicate and eclectic than just a reggae release.

The EP kicks off with Bring Back Love.  A gorgeous mix of traditional roots reggae with inflections of soul, a dominant sax kicks off the track, almost having a conversation with Vysionaer’s riffs across “No more”. Keys play on the bubble pattern (a musical device in reggae where an instrument plays off the beat). It takes you straight into reggae territory. But Bring Back Love is more complex than this. A Hammond organ subtly plays a complimenting melody to the song’s main one. A bass guitar performs a wandering “lick” (a repeated melody, rhythm, or both), The backing vocals have a distinctly soulful, softly clipped doo-wop feel about them, with a call and response arrangement present at times. The whole affair is 21st-century roots perfection:

This continues with the more soulful If You Don’t Mind. Some of the musical devices are the same. But funky electric guitars and a stripped-back drum line, with hi-hats and the snare predominant, transport you back to the funk soul era.

Marley does what it says on the tin. It’s a beautiful throwback to the heyday of roots. In a fitting tribute to the late, highly talented and influential artist, Vysionaer switches from straight vocals to a more “singjay” style. This is a combination of singing and DJing. The track, Marley-like in its arrangement, also stands as a showcase of the skilled production and mastering of the EP.

Track four is No Stoping. Once again, it’s intricately different. Electric and bass guitars take the lead. The bubble pattern, while present, is barely audible. But it’s still enough to give you a Jamaican vibe. The Hammond organ is back with the keys doing a gorgeous one-two with the electric guitars at some points. But most impressive on No Stoping are Vysionaer’s vocals. He breaks from the near-consistent baritone/low tenor seen on previous tracks. This time he goes into a full-blown, roaring tenor. He hits notes with ease that many male singers would have to use their falsetto to reach.

The EP concludes with the title track Soldier. Again grounded in roots, there’s a distinctly RnB feeling to the track:

What also stands out about the EP is the narrative Vysionaer has built. It’s based around his Rastafari beliefs and serves as storytelling to where he’s at spiritually, but also where we as a species and a planet are.

Bring Back Love is a song of devotion to Jah (God). Vysionaer discusses giving himself over to his faith and ensuring that everything he does in life is for the good of his “community”. As he proclaims:

I never come to make no stride,

I never come to pick no side.

I only came ’cause I realised,

Jah power is higher than I…

In If You Don’t Mind, Vysionaer moves onto dealing with other people’s criticism of his relationship with his partner. But it could also be seen as a broader commentary about his faith, relationship with Jah and the attitude of those in “Babylon” (the system we live under government by politicians and corporations). It nods to how those who rule over us would much rather those opposing them quietly went away. The philosophising continues on Marley and No Stoping.

Then he flips it up with Soldier. Inspired by Senior, who was a soldier for a period of time, Vysionaer gives a moving narrative about the sacrifices members of the army make for Babylon. It’s all the more interesting when you know that at one point he considered this career path himself.

But fortunately for the world, Vysionaer never joined the army. It was a good call. Because Soldier displays the remarkable talents of this emerging artist. He and Senior have taken all the sensibilities of roots and combined them with some top-notch production and the artist’s versatile, passionate vocal skills. But moreover, Soldier showcases the musical ingenuity of both these men. Filled with delicate and subtle layers of soul, gospel and funk, it’s quite something to behold. And with a powerful lyrical narrative to boot, Vysionaer has placed himself perfectly in the current Jamaican music scene. It’s a stunning first vision and a teaser of more to come.

All other tracks courtesy of Al. Ta. Fa. An. Records